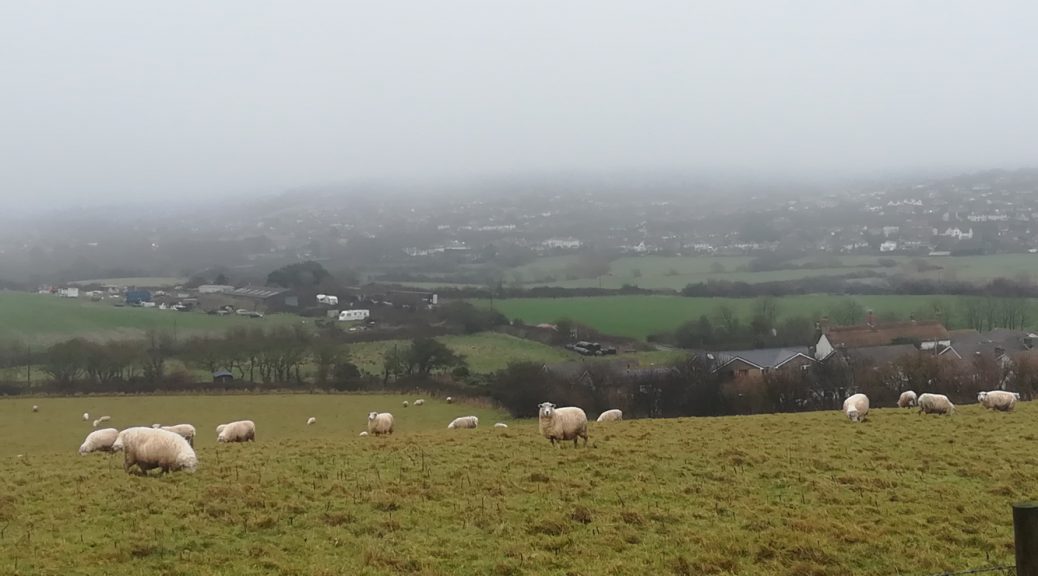 Featured Image: On a walk along the Jurassic Coast in northern Devon with Exeter’s Outdoors Society

As the vast majority of Vassar students studying abroad last term are settling back in at Vassar, I’ve returned to the eccentricities of life in southwest England. Coming back to a place that is both still foreign and also home produced a mix bag of emotions—it was harder than I imagined watching my friends reunite in the comfortable familiarity of Vassar’s bubble as I bumbled about in the quintessentially English rain with a broken adapter and no phone, having lost the latter in a Barcelonan taxi. But the last two weeks have provided me with sweet reunions of my own, as well as unexpected reminders of Vassar.

My first night back, the students from my English class last semester planned a meet up at a wine bar, where we traded stories of break and hopes for classes this term, and fangirled about our eclectic, Thomas Hardy-obsessed feminist professor. I was reminded that night, surrounded by British students for the first time in several weeks, of how accustomed I’d gotten to their accents, phrases, word-choices over the last few months, as it all washed over me again.

I met up also with an Exeter English professor who I met while she was teaching at Vassar last spring, as well as with another Exeter faculty who was at Vassar just this past fall. We traded thoughts on Vassar in light of what we’ve experienced at Exeter and vice versa. Spending time in an education system structured quite differently from Vassar or any American university, I’ve noticed myself developing a more critical and informed lens on how I view higher education—its structures and idiosyncrasies, and the ways in which students engage or fail to.

I’ve had the fortune of liking all the professors I’ve had at Exeter so far (or tutors really, as they are called here) but their teaching styles are much more structured, their ways of thinking about topics decidedly British. That is, until I got to my English class this term, on letter-writing as a form in fiction. The instructor is a new, young, gay fiction author and poet from Jamaica who flunked out of his undergrad degree but got into a master’s program with the suggestion that they accept his award-winning book as a substitute for a diploma. His comic sarcasm, personal tangents, aptly used expletives, and free-form, do-whatever-you-want-just-don’t-be-boring take on assignments makes me feel like I stepped right into a Vassar classroom. After a semester of getting inundated with pages of rules about every little thing, I feel more at home in that room than I do almost anywhere else here. What is interesting though, is looking around the room and seeing the bewildered and arguably terrified expressions on the faces of all the British students. This style for them is alien. This class is a reminder to me that you can find Vassar-like people all over the world, and that what us Vassar students consider the norm in education is certainly not everyone’s. My classmates’ reactions make me step back and think more deeply about the approaches and opinions of our instructor rather than taking him for granted.

In all honesty, this is what the University of Exeter has been best at making me do all year—prompting me to think again about the views ingrained in me and work to explain them in ways I would never need to in the U.S. The two other classes I’m in—one on police and policing in England and Wales, and the other on the rise of populism and anti-politics in contemporary public debate—are teaching me so much about politics and state structures in Britain, while constantly making me think about how what I’m learning about another nation informs my understanding of the police structures and political environment in the country I come from as well.

Now as my home city of Minneapolis gears up to host the Super Bowl this weekend, I’m looking forward to watching the camera zoom over all the buildings, rivers and lakes I know so well from my viewpoint an ocean away, surrounded by Brits for whom the Super Bowl is a rather puzzlingly large and inconveniently late phenomenon. I already know it’s going to raise questions and spark realizations I haven’t thought about in all the years I’ve watched it before.

The angst of missing out is something we all have to battle with at times, and most days I grapple a bit with the decision I made to give up an entire year at Vassar. At times, I’m certain I made the right choice, and at others I doubt myself. But as my friend Setse pointed out, these months away are going to make me embrace my last year of Vassar with a fierceness—and a new critical perspective—I’m looking forward to.