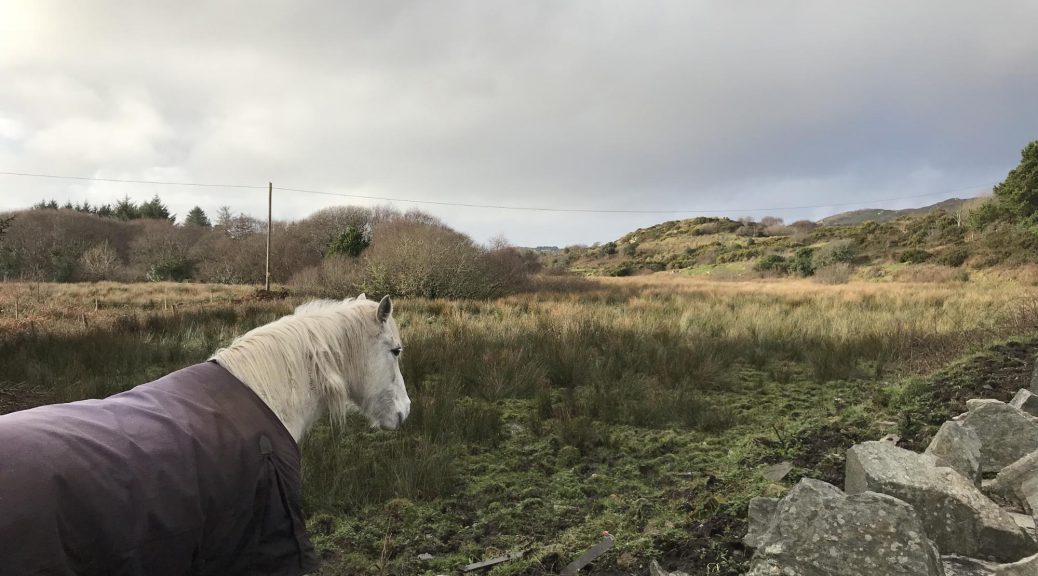 Featured Image: Clifden, Ireland is not just a one-horse town. By my count, there are at least seven equines.

To some degree, Clifden is a unique setting in which to study abroad: not a large metropolitan university in a place like Madrid or Paris, but a remote yet lively village surrounded by the rolling coasts and vast pastures outside the city of Galway. It’s the type of place where you might see a dog casually strolling down the street without a human accompanying him. Maybe he’s so well-trained that he can walk himself, you think. Maybe he’s on the way to get his daily treat from the local shopkeepers. Maybe that dog is the mayor. Ok, he’s probably not the mayor, but the point is that this is a quaint, picturesque village. Despite its modest population, however, Clifden has more than its fair share of humanity. It is a tightly-knit community with vibrant, neighborly Irishness circulating throughout like an electric current. Everyone from the hotel managers to the staff of the school have gone out of their way to make me feel welcome.

This program, which has been running steadily for about thirty years, is primarily a venture in education work experience. The bulk of my time is spent in the classrooms of Clifden Community School rather than in college lecture halls. In this capacity, I am trying to be the Teacher Assistant equivalent of a sponge—I want to observe and absorb as much knowledge and experience as I can in the day-to-day work of an educator.

I am particularly looking out for the ways in which school management and teaching practices in an Irish secondary school differ from what I experienced as a product of the American education system. When I eventually pack up what I have learned and bring it back to the United States (if I don’t decide to live here forever, that is), I will apply it to Education classes at Vassar and then to my career in the field of education. Vassar students who go to Clifden also take a one-on-one seminar with a mentor at National University of Ireland Galway, which serves as a thorough introduction to the rich and time-honored culture, history, and literature of the “Land of Saints and Scholars.”

There is another way that my semester in Ireland is very different from the standard study abroad experience: I’m flying solo! Not only am I the sole Vassar student going to Ireland in Spring 2018, but this program is also more solitary in nature than life on a campus.

There are advantages and disadvantages of this uniquely individualistic model of a semester overseas. I often find myself forgetting that I am a college student, and not just a guy existing out in the real world, studying his surroundings, trying to find his way through life in another land. But that is not to say that this experience is less valuable than the time I have spent in the more academic landscape of Vassar. I have come to discover that if you put yourself forward with a conscious effort to take advantage of everything that life in Ireland has to offer, the advantages of travelling alone vastly outweigh the disadvantages. I have met plenty of friends and colleagues on this side of the Atlantic, and continuous support from the two Irish administrators of the Clifden-Vassar program has made it easy to adjust to living here in Ireland. But at the end of the day, I am my own roommate, my own travel agent, and (regrettably) my own dining hall chef. Independence isn’t new to me, but self-sufficiency is like Guinness—it tastes different in Ireland. It’s a new spin on what you thought you already knew. There’s nothing quite like a frothy pint of living with responsibilities.