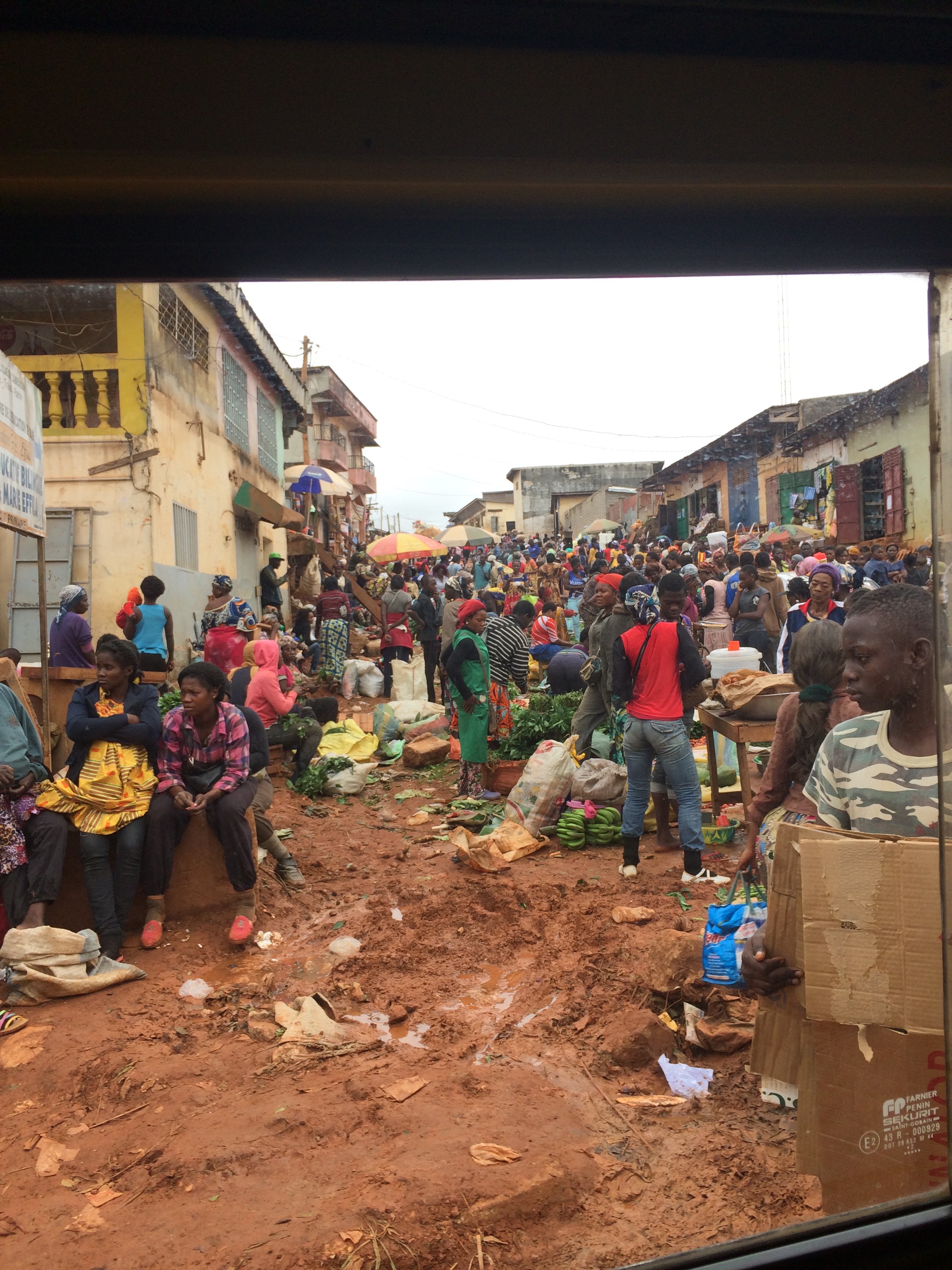 As I packed up my suitcase for my semester in Cameroon, I tried to picture what it would be like there. I struggled to imagine what my host family would be like, how the food would taste, or even how I would adjust to a different climate. Now it’s been almost three weeks, and everything here is already starting to feel pretty routine.

There are numerous stories I could share in this post, such as the man that tried to buy me while we were buying cloth from him, the chicken my host mom made me deplume after she killed it in our kitchen sink or when I saw my host sister Graciela take her first steps by herself. However, for this post I’m going to focus on one day that I still can’t believe happened. I arrived in Yaoundé the evening of August 29, and on August 31, SIT sent us off on “the drop off.”

We were sitting at lunch, still in the awkward phases of getting to know each other, when our academic director announced that we would be heading into town that afternoon for a scavenger hunt. I assumed that they would drop us off together to walk around the city for the first time since we’re only a group of eight Americans. Unfortunately, I was wrong. We were given a partner and a list of things to find in the city. We were also given 3,000 francs, which is $6.00, to take taxis around the city. They told us the name of where we were staying and some quick instructions on how to hail a cab and how much to pay. Their advice on how to find our way around without cell phone data or a map was just to talk to people. I had never even seen a map of the city. It would be an understatement to say I was a little nervous.

At this point we had no phones and no money other than the $6 for the two of us. They advised us to leave all valuables in our room because people pickpocket a lot and cut purse and bag straps to steal your stuff. I left my phone and money, and kept a certified copy of my passport and my $3. I then climbed in a cab with my partner and we were off. Each cab was given a location to drop their students off so that we wouldn’t be in the same place as any of the other SIT students.

My stomach was knotted as the driver drove through the city. My partner Casey and I desperately tried to make sense of where we were going, but there were no road signs, traffic lights, roundabouts or any other easy landmarks anywhere. We twisted and turned through the city. I had no idea how we would be able to navigate a city of 2.5 million people. Luckily, our drop-off location was the Université de Yaoundé 1, which was actually one of the places on our list! We went off and talked to some students about what they were studying, and checked off the first item on our list.

Next we had to hail a taxi. Casey and I stepped out timidly into the road and stuck out our hand, hoping it would go well. It’s intimidating getting a taxi because the roads here are crazy. While there may be lines painted on the road that make you think there are separate driving lanes, no one drives in two clear lanes. People do U-turns and pass each other whenever they need to. The other day, I actually saw a taxi zoom backwards down a normal road, somehow not hitting anyone.

There are no sidewalks, and taxis drive so close to you that I’ve had to jump out of the way multiple times so my toes wouldn’t be run over. The way to get a taxi is also very different. In Cameroon, not every taxi will pick you up. You stand in lines on the side of the road, and taxis drive by and you call out where you’re going. If they can take you, they beep their horn and you climb in. So you have to know what side of the street to stand on, and you have to be ready to quickly shout out where you’re going.

We finally got a cab that would take us, and he zoomed off, picking up three more people on the way. All six of us were squished in a five-person car, of course with no one wearing seat belts. I’ve never yearned for a seatbelt as much as I do in these taxis. I’m still surprised to this day that I haven’t seen more car or motorcycle accidents, especially since everyone takes taxis. Even if you’re going a short distance, people will take a taxi. At least 80% of the cars on the road are yellow taxis, most of them falling apart, and many with broken bumpers. One taxi we were in almost rear-ended someone and then proceeded to drive over the curb to go around them.

The next few stops were fairly easy. After asking directions, we wandered through the packed streets, checking off items on our list. We hailed another taxi to take us to Bastos to find a restaurant, bank and bakery. After completing our list, we still had enough time to get a drink and then walk around and look at the people selling papayas, pineapples and giant avocados. We made it back with plenty of time and even a little money left over. It was a challenging day at first, but it ended up being so much fun. As much as Yaoundé is intimidating, I definitely felt that I could begin to master the crazy packed streets. It’s still funny to think about the fact that we were given $6 and dropped off in a huge city we didn’t know, though at the time, there was nothing amusing about the situation. Now I’ve taken multiple taxis, and slowly but surely, I’m finding another home over 5,000 miles away from Vassar.

P.S. The pictures included were not taken on that day since I didn’t have my phone with me. I have since taken some photos from inside taxis, but I definitely don’t take my phone out in public.