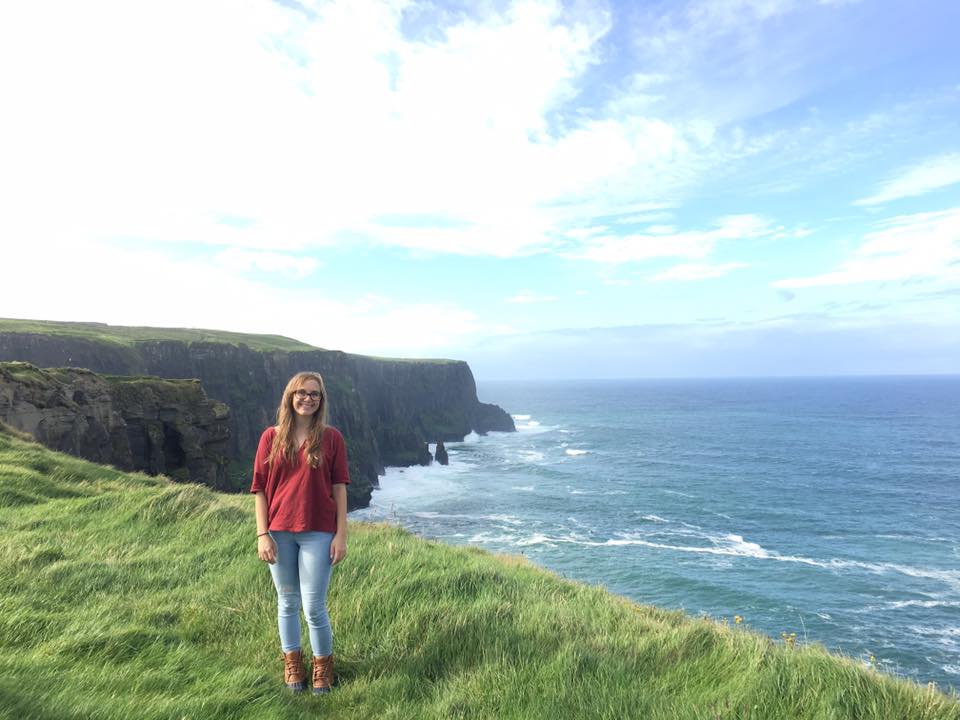 Hi! My name is Katie Nordstrom, and this fall semester I am participating in an Irish teaching internship. Jake Butter ’18 (another Vassar student) and I are living in a two-bedroom apartment above a gas station, which is common in Europe, in a very small, touristy town (population 2,609) in Western Ireland called Clifden. I am currently experiencing two firsts: Living in a country other than the United States as well as living in an apartment where I have to cook and clean. Fortunately, I still don’t have to do the scariest thing about being and adult, which is paying rent (thanks Mom and Dad). So, Jake and I are trying to figure it out. While we sometimes blending in seamlessly, sometimes we might as well have “AMERICAN” tattooed across our foreheads.

For our first weekend in Ireland, we decided to explore the countryside and visit the acclaimed Cliffs of Moher after our Friday class, which takes place in the city of Galway about and hour and a half from Clifden. We started out from our apartment to catch the 9:00 a.m. bus from the station outside the public library. The bus pulled up, and we took out our phones, flashing our electronic tickets to the driver as we climbed on board and made our way to the seats.  We looked just like locals.

We made it to Galway, attended our class at NUIG, and ventured into the city looking for something to eat and a hostel for the night. This would have been an easier task if it hadn’t been pouring rain and we had data available on our phones. The scene turned into the two of us stumbling into random hostels sopping wet to inquire about a room for the night. We tried three different places before a very nice man took pity on us and called around. Success! There was a B&B down the road with two open beds. Everything worked out fine, but we learned the valuable lesson that it is important to make arrangements ahead of time. We secured our things in the room and paid for the night. Finally, it was time to eat! I had the famous seafood chowder of Western Ireland, and Jake had a delicious-looking pulled pork sandwich.

After we ate, it was time to run an errand to the computer store (my computer decided that it no longer wanted to turn on three days after arriving in Ireland…Woo hoo!). We looked up directions using the restaurant’s Wi-Fi and proceeded to mark the route down on our physical, paper map (apparently these still exist?). The sky had cleared up and things were looking good. We even made it to the store without getting lost one time! I dropped of my computer and we started the trek back.

Unfortunately, it started raining, and we were walking against the wind, which forced us to hold our hoods over our heads and face the ground as we walked. One second I was having a conversation with Jake (probably complaining about the rain), and the next I am suddenly on the ground with my glasses knocked off my face. I looked up and realized that I had rammed my head into a window that was propped open. I felt something trickle down the side of my face, now aware that I had cracked my head open. The closest store we could find with a bathroom was TK Maxx (T.J. Maxx in the U.S.). After I cleaned up, took an aspirin and sat down for a bit, we ventured back into the city. I had to carry tissues with me because the cut was connected to my eyebrow muscles, meaning that every time I smiled or laughed my head would start bleeding again!

The evening went well, considering. We had dinner and got a good night’s sleep in the B&B, making sure to get up early in order catch the first bus to the Cliffs of Moher. It was about a two hour drive, and the scenery was gorgeous, with rolling green hills on one side and the powerful ocean on the other. We knew that we were getting close when I misunderstood the bus driver and confidently insisted that Jake and I get off the bus. However, I was wrong, and we still had a 3.5-mile uphill journey to the Cliffs. This mistake turned out to be a blessing in disguise, because it was the single most beautiful walk of my life. The sun was shining with a nice ocean breeze as the cliffs appeared slowly and elegantly. I whole-heartedly recommend that everyone go see the Cliff’s of Moher. It is one of those formations that look gorgeous in pictures but are literally breathtaking in person.

Once we got to the top, we were exhausted and ready to get on the bus back. I was sleeping and Jake was reading when the bus suddenly stopped. A bus in front of ours had broken down diagonally across the center of the road, making it so that no one could pass in either direction. Eventually, a mechanic arrived and moved the bus, but we had lost two hours sitting in the road, causing us to miss our connecting bus in Galway by five minutes! That was the last bus to Clifden of the night. Thankfully, we were able to rent out the same beds for another night and leave bright and early the next morning on the first bus. We had survived our first travel experience in a foreign country! There were bumps, some caused by our inexperience, others by fate, both making it an adventure I will never forget.