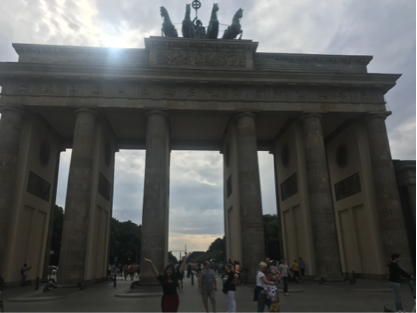 Featured image: Me in front of the famous Berlin landmark, BrandenburgerTor. Fun fact: over the summer I could see the monument from my apartment.

Berlin, much like myself, is a project under construction. I fell in love with the Großstadt Berlin during perhaps the most confusing time in my life to date. Let’s rewind a little.

My choice to come to Berlin came alongside my Vassar acceptance letter. Like so many of my peers, I applied to Vassar because of its generous financial aid. However, my family was doubtful and cautioned me to not get my hopes up. Once I got my financial aid package and knew that college was a possibility, I wanted to make the most of it. Being the first in my family to go to a traditional four-year institution, I knew my experience would differ greatly from that of my sister. I wanted to get a college education not only to obtain a stable income in the future, but I wanted to take advantage of all its opportunities in order to become a well-rounded person. I wanted to expand my horizons, both socially and intellectually. Thanks to Vassar’s financial aid and open curriculum, I decided that I was going to learn another language and study in another country. My destination: Berlin.

People always ask: why German? Prior to coming to Vassar, my German consisted of me mumbling along to “99 Luftballoons” (and really only understanding when she said “Captain Kirk”). I always wanted to learn another language, which brings up the question: why not French? Or Italian? Although some might believe German sounds harsh, I think its unique word formations and rigid grammatical structure is bound to the desire of its speakers to make sense of their changing reality. I was also captivated by their quest to find a German identity and what the future of the country is in world politics. Berlin is exactly where these questions are discussed. It has a fraught history: it’s the capital of the Third Reich, host city of the 1936 Olympic Games, and it was divided for 30 years. It also has its quirks: it’s the vegetarian capital of Europe, a techno club haven, and the birthplace of döner (popularized by a Turkish guest worker).

Although I knew I wanted to study abroad, the choice was actually harder than I thought. I had made such great friends at Vassar, I had great relationships with professors, and I was very active on campus. I was worried about sacrificing some of those things by going abroad. I was encouraged by Kerry Stamp and Professor Williams Brown to take the chance. Not many first-generation, low-income students get the chance to study abroad, much less for a year. They assured me that the communities that I had made at Vassar would be there when I got back. With their words of encouragement and guidance I applied not only to the Berlin Consortium for Germanic Studies, a program run by Columbia University, but a Cultural Vistas Fellowship to intern in Berlin for the summer. Once I got my acceptance to both the reality had still not sunk in that I was going to live in Germany for a whole year.

If I’m being completely honest, my first couple of months in Germany were rocky. I was intimidated because my language skills were not at the level that I wanted to be. The introduction classes were stressful, and I felt that I was performing below expectations. Applying for my visa alone and navigating German bureaucracy was also very draining. This caused me to be a bit recluse and distant from my host family. Hearing about problems back home, the unexpected financial costs, and recovering from a toxic relationship just exacerbated my feelings of loneliness. I strongly considered going back home. However, with support of family and friends I became more grounded. I learned to take a pause and allow myself to feel all that I was feeling. I took walks around the city, visited new coffee shops, and watched the sun set at historic landmarks. I began to enjoy being by myself and relishing in those moments that don’t have any real meaning at all.

So far, I have made some really great memories. I’ve given class presentations all in German, made friends from all over Europe, and traveled to more places than I have ever before. My mentors were right about my Vassar support groups being there when I go back, in fact some of them have visited me in Berlin. When people visit me in Berlin, I know exactly which U-Bahn to take, which S-Bahn to avoid, and which bus we will most likely miss. Berlin has made me more introspective. Although I came here to learn about German identity, I have learned a lot about what it means to be American. I am currently reading How to Hide an Empire by Daniel Immerwahr and it has made me think a lot about how we need to start rethinking our national identity, which is something that Germans are constantly doing (for better and for worse).

So far, my study abroad experience has not been exactly like the ones they advertise on brochures, but that has made it all the more rewarding. I have taken risks, learned to accept failure, and revel in the uncertainty of it all.