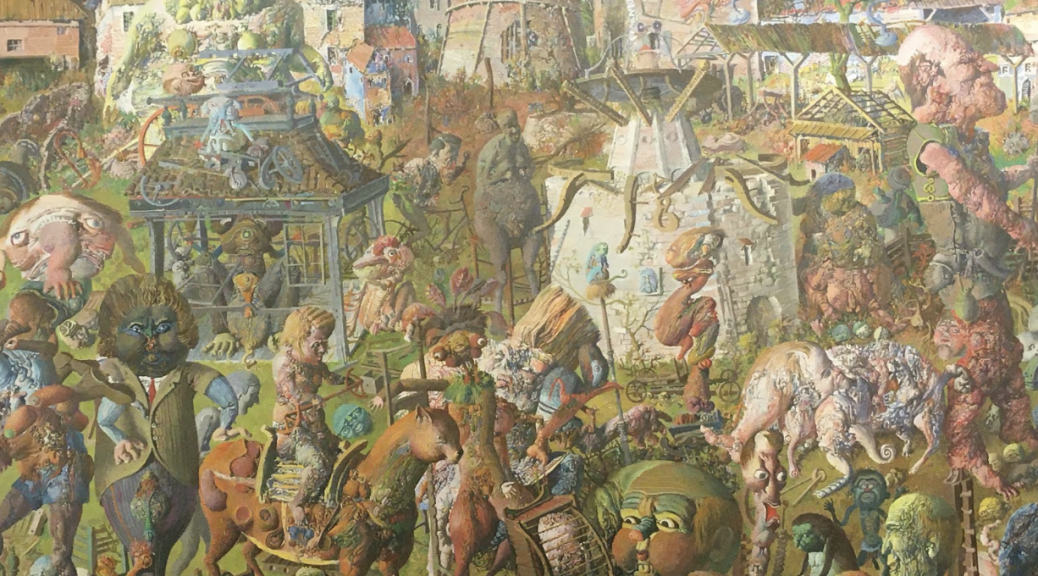 Featured image: He!Viva Dada by Jean-Michel Humeau, one of my favorites from Le Centre Pompidou.

My first few days abroad were spent yearning for somewhere else. From dark and wet 45 F degree weather in Newark, NJ, I left for Glasgow. Once landed, the taxi ride from the airport to my flat  revealed a town not unlike the surroundings of where I call home: dark and wet 8 C weather, fading Victorian charm, muddy rivers, low industrial buildings, looming gentrification — I felt like I might as well have remained in the US. I imagined alternative realities where I’d chosen a program in Cape Town or Melbourne, and was able to see the sun for more than two hours a day. This feeling of being in the wrong place, compacted with the anxiety of having chosen to go abroad a different semester than all my best friends (and thus, endure a year without seeing them) was difficult to subdue when jet lag and general ineptitude left me awake from the obscure hours of 3pm to 5am, feeling isolated from my new world.

Things got better. I acquainted myself with my flatmates, who are kind, generous, and conveniently all from North America, grappling with the same time differences. I called my expat cousin in London who coached me through the transition to British life. International orientation introduced me to hundreds of possible new friends. (Though far more of them were Canadian than Scottish.) I started classes, two at Glasgow Uni and another couple at the School of Art. I even read a few books! Jonathan Franzen’s Freedom, Sally Rooney’s Normal People, and Ron Butlin’s The Sound of My Voice.

Still, even with the daily routine of school, my walk home through Kelvingrove Park, aimless wandering around Tesco, and back home to watch This Country, something felt off. I didn’t feel at home.

This all changed my third week. I made the impulsive decision to visit my best friend from high school who is studying abroad in Paris. I had an amazing time visiting with her, meeting her host family, and sightseeing (Le Centre Pompidou, The Louvre, Montmartre, and of course, the Eiffel Tower), I left feeling so grateful for my life in Scotland. I’m not sure what did it— the exhaustion of traveling, the expense of the trip, the French and their general attitude toward Americans—  but whatever it was, I couldn’t help to pay greater notice and respect to the kindness of Glaswegians, their humor, cheap Ubers across the city, a shared English language, my flatmates, Tesco, et al upon my return. I felt silly for being so cynical my first few weeks. I was just scared.

I suppose this had less to do with anything specific about the two countries or cities and more the feeling of home. I remembered returning home to New Jersey during my first October break. I’d gone to Boston for the first weekend, also to see Zahra, and at some point on the 6-hour bus ride back down the East Coast, I felt very tired. I tried to conjure the image of my bed at home, but I couldn’t remember what my bedroom looked like. I finally got an image, but it was a bed in a house I’d moved from when I was 14. Finally, I remembered my own bedroom. The point is, I never forgot what my dorm looked like. And I realized, by that point in the year, I’d come to consider Vassar my home. In the cramped EasyJet bathroom, I fantasized about my separate hot and cold taps at home in Glasgow.

If there’s anything I’ve come to realize about life at Vassar is how simple everything is made for us. We live, learn, and eat in the same place, and see all the same faces as we pass between locales. Of course, that’s part of the small liberal arts school charm: with routine homogenized, one’s independence is free to be fully channelled into intellectual and creative pursuits. But, at least for me, it can start to feel like high school; constantly worrying about what people are thinking of me, or rapt with the fear that they aren’t thinking of me at all. Here, I’m anonymous, unknown, nothing. I feel so relaxed.

I’ve never had more free time than I do right now. So far, it’s been mostly wasted, but on days like this past Monday, when I venture somewhere new to commemorate partial sunlight, it feels very good to have so much time with myself.