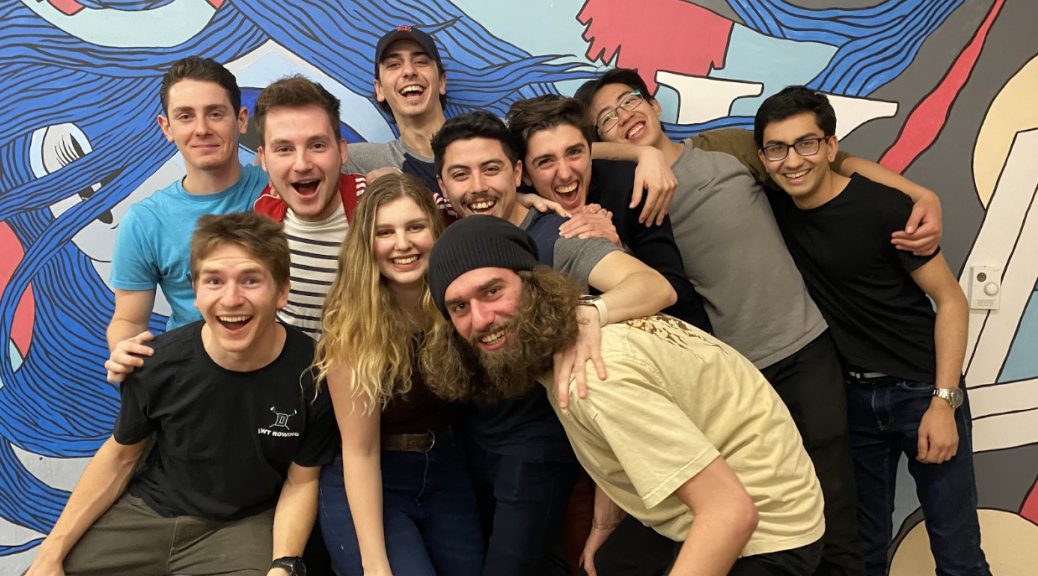 Featured image: Above is a picture of me and my boys. The dual degree program (3/2 program) is mostly made up of guys, so I’ve been learning how to be a bro. I now fully understand the phases “cracking open a cold one with the boys” and “Saturdays are for the boys.”

Rush, rather recruitment, is overwhelming for everyone involved. At least, here at Dartmouth it’s very overwhelming. I thought once I had gone through the process as a potential new member (someone who is rushing), being on the other side wouldn’t be anywhere near as demanding or difficult. I was wrong.

Maybe this time I didn’t feel as much emotional turmoil or feel inadequate, but I was definitely socially exhausted. Honestly, as a sister in a sorority, I spent more time doing recruitment this term than when I was a potential new member. Also, I didn’t realize how many girls are actually so incredibly rude throughout the process. For sorority recruitment at Dartmouth, it is mandatory that girls go to every sorority on campus for 50 minutes. If you deviate from your schedule, you get dropped from recruitment and can’t be a part of any sorority. However, nothing prohibits you from going to each house and being fairly rude. Of course you can be written up for violations and kicked out of recruitment for being rude, but that’s so hard to actually enforce. And it’s easy to just give off rude vibes without actually saying anything that is directly rude and a punishable offense.

Often, this looked like me sitting with a girl, asking her questions about herself only to receive short one word answers as she stared off blankly into space, never making eye contact. I would be forced to sit and try and interact with her for ten minutes. It was annoying, disrespectful and such a waste of everyone’s time. I mean we are forced to talk to each other. Just tell me the entire plot to the tv show you’ve been watching. Literally anything would be better than me asking about what you did on your vacation to Puerto Rico and just getting “I don’t know” as a response. I still had five minutes to kill and we hit another dead end, so what better way to waste time than ask about every possible thing you could have done on vacation? Did you go swimming? No. Did you tan? No. Did you read a book? Yes. What book? I don’t remember. Ah interesting, well I’ve been reading a lot of books over break.

Anyway, glad all of that is finally over and the best part is now we have so many new sisters, which is super exciting. I am now the assistant of new member education, so I’m helping plan new member meetings and introduce them to the chapter. It’s actually added on a lot of extra work that I didn’t really expect but I’m excited.

My time left here feels so short. Only five weeks left and I have yet to complete most of my bucket list for this term. I mean I did get my nose pierced and it looks cute, but then I saw a TikTok (how? I don’t know I’m not even on TikTok) about how kids go to college and after a semester get their nose pierced to be fake edgy. And like fair. However, my defense is that this is actually like my sixth semester in college and I was already fake edgy before I got my nosed pierced. I mean I love my Timberlands, Carhartt jacket, large nerd girl glasses and silver hoops. I mean, some people didn’t even notice my nose piercing because I already was so fake edgy that it just enhanced my look. But I’m not gonna lie, the girl who posted the TikTok does look fake edgy with her nose piercing. I will include a before and after picture for your judgement I guess.

I also went to a hockey game, which was great. I love doing the classic Dartmouth student things, it almost makes me feel like I am a real Dartmouth student. I was able to hide my imposter identity in the faceless green crowd.

I got my first pong injury last weekend. First, let me start by telling you of the importance of pong on this campus. Basically, the Dartmouth kids believe they are the ones that created pong. And by pong they mean some sort of wack version of ping pong with literal paddles that have their handles cut off. This to them is real pong. What we Vassar kids, and literally the rest of the world thinks of as beer pong, is actually called Beirut here and hated. If you literally say let’s play real pong (meaning Beirut/beer pong), they will ostracize you. Anyway, pong is the entire culture here. People play all days of the week and have huge tables and basements devoted to this. I’m not gonna lie, I’m over it.

Unfortunately though, I was forced into playing. I pointed out this guy from my creative writing class to my big (aka my older sorority sister who is forced to love me, but actually loves me) and told her that he writes these amazing stories and has such an interesting mind that comes up with unique plots. She took this to mean that I was kind of into him, which was totally true. Anyway, she was the ultimate wing woman and set up this whole game just so that I could play with him. Then she told all of the other girls and guys near her that I was into him and everyone kept coming over to tell me to make a move and that he was into me. I’m starting to get up some confidence, then, BAM! He smacked me in the face with the paddle (accidentally) and my lip started bleeding. It was cut both on the outside from the paddle and on the inside from my teeth. I was done. He then offered to walk me home and on the walk back told me all about his girlfriend. It was a double whammy, emotionally and physically hurt. Anyway, that’s how my kiss five people bucket list item is going. At least now I have some fodder for my stand up special.