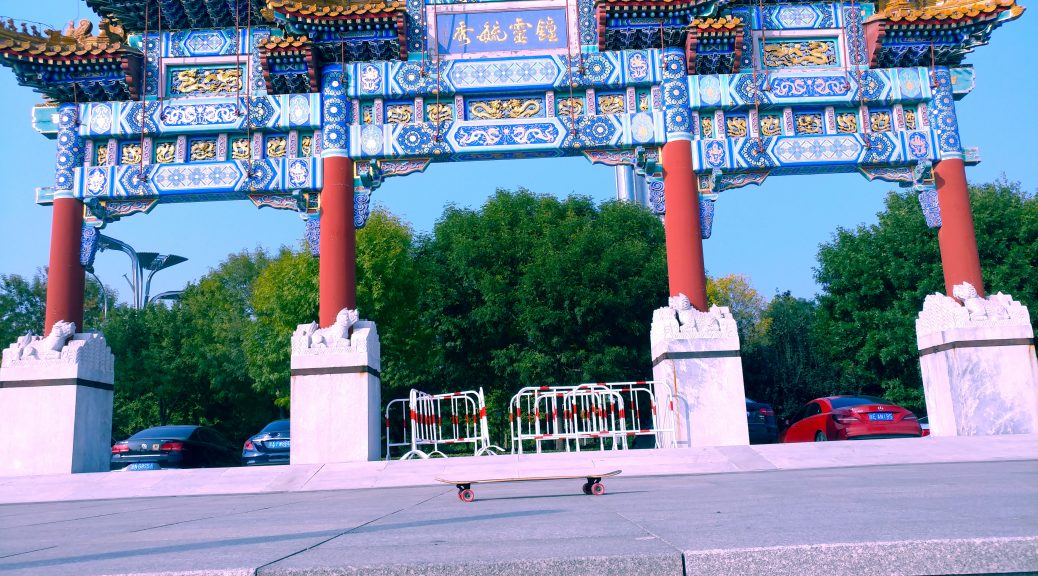 Featured image: I took my longboard to Beijing Olympic Park and rode around for a few hours in the middle of October. The weather was perfect and the views were amazing. I am lucky enough to not have class on Friday so I could avoid any weekend crowds.

For my last blog post, I wanted to revisit my goals for studying abroad as a nice way to conclude the semester. The first and foremost objective I had in mind when coming to China was to reconnect with my roots as a Chinese American. This one ended up being a lot more complicated than I expected.

Lately, I’ve been binging the Netflix show Bojack Horseman. It was a show I watched a year or two ago, but then had to take a break from because it got so depressing and then forgot about it until someone in my media studies class who sits in front of me started watching it. So, I spent the entire lecture watching Bojack Horseman with them. And continuing to watch it on my own time. I mention this because Bojack Horseman manages to convey a very similar experience in Season 5 Episode 2 (The Dog Days Are Over), where Diane, a Vietnamese American, takes a vacation trip to Vietnam. While she goes because she is dealing with a divorce, the show really nailed the feeling of being in that situation and it was fantastic to see that sort of accurate Asian American representation.

Here, because you look like a local, people assume you are a local. As long as I don’t open my mouth or have an extended conversation, most people would believe I am Chinese. At my first frisbee practice here at my school, I was talking to some other internationals and one of the first things I was asked is, “Why is your English so good?” It certainly has its benefits. People treat me like I’m a local. I haven’t really had any experiences getting scammed. I have had some people try to sell me something, at least I think, but that’s when I break out the, “Sorry, I’m American. I don’t really understand.” It has been very convenient.

But, despite all of that, you realize you will never be a local. Which, when you say it out loud like that, makes sense of course. But it’s the feeling of not fitting in. For once, surrounded by people who look like you and you don’t fit in. You never will. And for the majority of your life, you think it’s because you don’t speak the language. And that’s not untrue. You do need to be able to speak the language in order to connect. But you tell yourself once you’re fluent, you’ll be able to reconnect and feel like you belong. But there will always be a culture barrier separating you. You grew up watching different shows. You were raised with different ideals. You don’t browse the same internet that they do. You eat different foods. You aren’t Chinese and you won’t ever be.

But, that’s okay. I think after growing up disconnected from my Chinese roots, I became a little too fixated on being Chinese. I’ve been so focused on trying to reconnect that I forgot about the American part of being Chinese American.

Here, I’m American. I don’t introduce myself as Asian American or even Chinese American. That concept of identity doesn’t exactly exist over here. And that has helped me really refocus on how I think of my identity. I am in every sense American and even if it doesn’t quite feel like it when I’m in America, coming here has really helped me accept that. In my experience, being Asian American means being constantly pulled between two countries to the point where you feel like you don’t belong to either of them. But it is here in the in-between where I am beginning to find solace and that is the best I can ask for.

The other main reason I came to Beijing was to improve my Chinese. And, luckily, that is a lot simpler. My Chinese has improved greatly. Though I’m not taking any formal language classes here, there is very little English in the city of Beijing so I can’t cheat and get away with avoiding Chinese. I’m really happy with the progress I’ve made. I find myself not struggling too much to have conversations with local students here. I have certainly reached the point where I can get around China with little to no trouble. My Chinese has become more natural, which is one of my biggest learning goals. Learning from textbooks can lead to using words that aren’t commonly used anymore by native speakers. From interacting with local students, I’ve really started to pick up on some of their word choice and slang. I occasionally will video call my mom or my grandparents and they’ve remarked that my Chinese has really improved and my pronunciation is better and my accent isn’t as heavy.

While those were my only two major goals for studying abroad here, I’ve learned quite a lot of other skills while being here. Peking University, in comparison to Vassar, is much less organized and my program has very little structure to it. So, I’ve really learned how to ask for help, which is something I used to struggle with. I’ve always had a “I can do it myself” kind of attitude, but here in this foreign country where people speak a language I’m not 100% comfortable with, I’ve had no choice but to ask for help. It was hard at first but it’s been getting easier and easier.

Being here in China has really allowed me to pursue my interests and do the things that I enjoy. I’ve made some unexpected friends and gone on several adventures. It has led to some monumental personal growth. And it gives me reassurance about life after college. I always felt a bit sheltered and babied at Vassar, not that I’m complaining. But, if I can get into my own little groove here in a big city where I practically came alone, then I can most certainly do it in America.