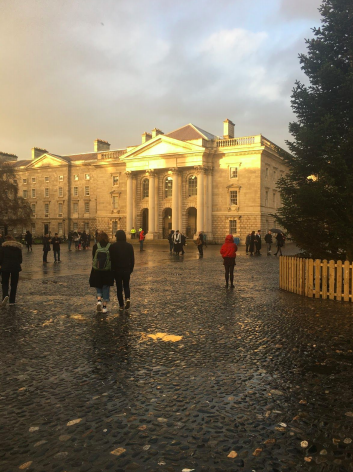 Goodbye from Dublin!- I’m gonna miss the rashers and beans 🙁 .

I’m going to miss everybody! I never thought I’d say it, but I’m also going to miss Irish food. I’m a huge tea fan, and the sheer amount of afternoon tea shops in Dublin had me LIVING. If you’re an afternoon tea connoisseur like myself, you always eat the pastries first and the actual savory food last, it’s a science. Other than afternoon tea, there is also a seemingly inexplicable love for Heinz Beans in Ireland, but sadly I missed the legendary pop-up Heinz Beans cafe by a couple of months (I’m actually extremely upset about missing a beans cafe, I’m not sure that they’re that common).

That aside, finals week is finally over! I was THROWN. Beaten to a mushy pulp. Have you seen those airplane hangers the European test agencies put you in? MASSIVE. Jokes completely aside I swear to God you could have fit at least three small jets in there, and that’s where our finals took place. TERRIFYING. Who wants to take an already stressful exam in a gigantic hanger used for rugby tournaments and horse dressage shows? Not me ever ever ever EVER again. Located in the middle of nowhere, which it somehow managed in a cityscape like Dublin, the pilgrimage to get to the venue was cursed and sullen as hundreds to thousands of students marched through the poor suburb.

At the time it was kind of bizarre, but in hindsight it was just the tiniest bit funny. We must have looked like a depressed and scrawny small battalion. The most stressful part of the entire week, though, was how I was going to take the immense amount of clothes I had acquired back into the US of A. I came with two suitcases, left with four and a half, all at least five pounds
overweight.

It was chaotic pulling the mass of weight I left my apartment with through the airport, but it was more chaotic that I arrived at the airport an hour after my gate had closed. It’s always a mega taboo when you have to be directed to the closing flight line for aer lingus. This becomes exponentially worse when you tell the attendant your international flight leaves in an hour and she replies with the line for immigration is about a half hour wait. She then called over another flight attendant and together they came to the conclusion that if I did not literally run at full speed I would miss my flight. So, I ran! I almost ALMOST missed it due to the fact that I wear 18 rings at all times and a security official made me take every single one off and put them all back on again. I made my flight with almost exactly one minute and thirty seconds to spare.