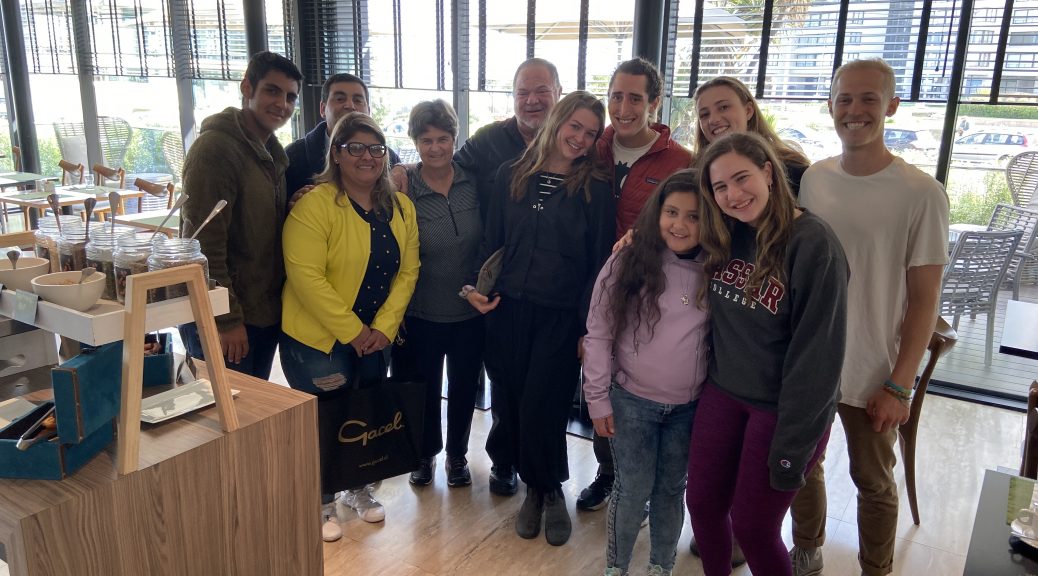 Featured image: The greatest photo of all time: My uncle and aunt from the states, my friends Mason, Sidra, Benji, and Kat, and Omar and his entire family all united for breakfast!

Today, I was walking home and I saw a kid who could not have been older than seven ask his mom, “What is the relationship to what is happening right now to the Dictatorship? Is it because people want a better life but can’t have it?” His mom looked at him proudly and began to break down the intricacies of the current political situation as he gave her his unwavering attention.

It is hard for me to categorize the last five weeks of civil unrest in Chile. Some parts, like the first night of the state-imposed curfew or the national strike that featured a massive fire barricade in a street close to my house, feel immensely vivid and recent, while other powerful but more ongoing experiences, like seeing and feeling the sting of the first wave of tear gas, being endlessly amazed by the courage and fearlessness of politically-active Chileans, or participating in cacerolazos, feel more distant. In spite of the destruction, pain, and chaos, the true value of what is happening lies in conversations and curiosity, whether they be between a mother and her son or a nation and their government, that this unbottling of pain has sparked. Chile Despertó or Chile Woke Up.

I have noticed that when I talk about the situation in Chile to my friends and family or on social media, I feel this weird divide about how to present the situation: on one hand, it is crucial to denounce the horrors happening right now and in the last 50 years, whether it be the lingering fear instilled in people during the Dictatorship or the 300 people and counting who have been systematically blinded by carabineros (police officers) while protesting. On the other hand, I absolutely adore Chile and the people I have met, the chilenismos that I have integrated into my speech habits (¡Sipo!), and the buzz of my city on a normal day. I do not want people who have never experienced Chile to read one or two headlines and dismiss the nation as corrupt, foreign, or other, because it is not—it is impressively mirrored after the United States. To criticize the situation in Chile is to also criticize some of the same systems of oppressions and legal and economic systems in the U.S. that have led to unmistakable inequality and ignited a fire within the souls of Chileans and also literally in the streets.

Perhaps unsurprisingly, this has led to a couple of intense waves of anxiety that rendered my normal processing tools not so useful. The first few weeks were tough due to the combination of tons of time but no schedule or classes, not really being able to leave the house, and zero head space to focus. However, three strategies made a huge difference for me. The first one: exercise. Running or going to the gym has helped carve out head space that did not exist beforehand. Since my university was my main source of a gym and it has been unreliably open, I invested in a $20 gym nearby, complete with a cat(!) named Sofia who roams as she pleases. Second, I set up an appointment with a counselor by phone. What I forgot is that with my language pledge is that the only people who I talk to in English about my feelings are my friends and family back home. Talking freely and in my native language about my feeling is immensely valuable and a bit necessary. Lastly, inspired by my grandma and sister and their knitting skills, I decided to get back in the knitting game after not having knit since I was 12. It is lovely to have something to do with my hands and weirdly fulfilling to transform a ball of yarn into useful objects.

Despite some of the difficulties of being here, I have had many moments in the past few weeks that have made my heart sing. Here are some of them: