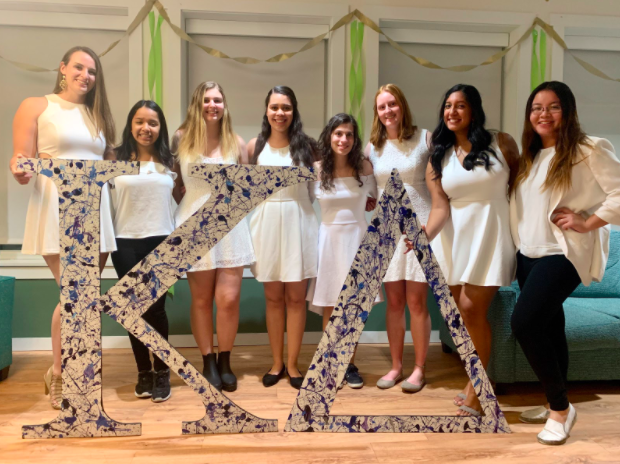 Featured image: If you were looking for a true update on my sorority life, I’m sorry that this isn’t it. However, I did get initiated, and there is more to come ;).

Once people find out that I am a 3/2 student, they always ask whether I like Dartmouth or Vassar better. Which is a fair question, but I know why they actually are asking that. They want validation that their school is better than Vassar. At least that’s what it feels like. Since it is a question I get asked a lot, though, I’ve given it some thought. And honestly, it’s not as simple as which school I like better. I am part of some really amazing groups here: my sorority and dance club. I’ve come to realize that being in these groups is what has truly made my Dartmouth experience as positive as it has been.

That said, I had a really difficult social transition here. At Vassar, I had a set group of friends and based my identity off of my one-minute spiel of what I did on campus. When I came to Dartmouth, I no longer had that. People would ask what I did on campus and like idk…nothing? I’d always been an active community member at Vassar, like being a computer science TA, an editor for the Misc, a director for Vass Shakers, or part of Strong house team. When I came to Dartmouth, I lost all of that community. I guess in a way coming to a new school allowed for a chance to reinvent myself. I didn’t have a traditional high school experience, and let’s not lie to ourselves, Vassar isn’t the tradition college experience. Dartmouth does have some more stereotypical college aspects, like football, greek life, and skipping class.

I left Dartmouth today and I actually felt sad, which was a real change from the end of summer term. In the summer, I was done with the other 3/2 students. This term, I made friends that I truly cared about and I felt like I was beginning to belong, no matter how many times the administration made it clear to me that I was not a real Dartmouth student.

I’m not going to lie, the way that the Dartmouth administration treats 3/2 students is pretty shitty. When I started, I didn’t get a mailing address for a week because I was grouped with the incoming first years. I was unable to get funding from the Women in Science Project to do research because the money is donated by alumni for Dartmouth students. My orientation was a 20-minute PowerPoint on the four different eating places on campus. We learned absolutely nothing important, like the fact that you need to electronically sign in for the term or you will be fined and eventually dropped from your classes. There is also an all campus Listserv where people send out all events and things going on, like dance try-outs, performances, or when they are bringing therapy dogs to campus. I didn’t find out there was a Listserv until two weeks into the term, and eventually coerced some girl to sign me up.

During the fall orientation, the 3/2 students received some valuable advice from administration: “You all go to McDonalds schools and this school is a five star restaurant. You are lucky to be here, but remember you are only classified as exchange students. You are not guaranteed to be able to come back in your fifth year.” This mentality that Dartmouth was too good for us McDonalds kids was a real driving force in our bonding and my Halloween costume. I decided to dress up as a real Dartmouth student as it is clear that I am not one. Sadly, I didn’t go full out and do cocaine in a Canada Goose jacket, but that just means that there is room to grow for next year.

Anyway, as I was saying, I am extremely grateful to be in my sorority and dance group because they love and accept me. Some of the amazing friends that I have made this term will be off in the winter, which means that I won’t see them for over a year and a half. That’s tragic. Even when my professors have made it extremely clear that they do not care about their undergraduate students and the overall college vibe that getting above the median (aka doing better than other students) is the only thing that matters, I found myself still happy to be there this term.

On a less serious and more personal note, I’m moving into my sorority house in the winter, which meant that I needed to move everything I own out of my current room. Yes, if you were wondering, I did hard core flirt with people in my dorm to help me. It’s three flights of stairs, what did you expect me to do?

Anyway, it was 3:30am by the time everything was out of my room and I was dripping sweat, so I decided to shower. Unfortunately, I really didn’t think this through. My towel, shower shoes and shampoo were all in the sorority basement. All I had was a tee-shirt and basically empty body wash. I took the most gross shower possibly in existence. I walked out of the shower feeling grosser than when I went in, which was a first. I had to natural dry in my tee-shirt in 25 degree weather with a heater that doesn’t work. I was exhausted and went to sleep soaking wet in a tee-shirt and my winter jacket because I didn’t have any blankets. Apparently, I also didn’t set an alarm so I would wake up early enough to catch my bus to the airport. The worst part of this story is that this move was about 10 times better than my move after summer term.