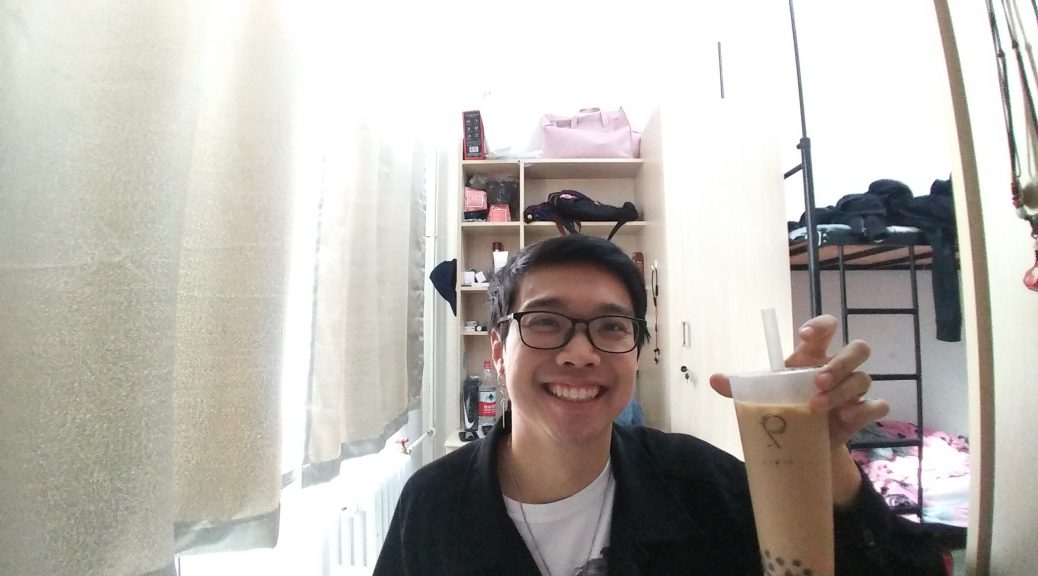 Featured image: Shoutout to the instagram that Heather and I run @subtleboba. I have been very inactive but now that I know how cheap it is to get bubble tea delivered, that might change.

Midterms week just ended for me. I am officially past the halfway point of the semester, which feels a little weird to say. It seems like I’ve only just started to really get used to living here.

Midterms weren’t too bad since the classwork is pretty light compared to Vassar. I had a midterm paper due for my Behavioral Economics class that had no parameters. Absolutely zero. I asked my professor if there was a format she preferred, and all she responded with was that there were “no requirements.” Two of my classes didn’t even have a midterm. The only real midterms I had were Ancient Chinese History, which was a test and a 1,000 character essay, and Statistical Learning, which was a test. Ancient Chinese History was fine. I just struggle a bit to write Chinese, which is why I’m here I guess. Statistical Learning was hard. The test last year had an average of 42. I went into the test with the game plan of doing really well on like two problems so that I could hit 40 and get curved. As I skimmed through the test, I realized that I needed to switch game plans to just writing down anything even slightly relevant, so that I could maximize partial credit.

One of my favorite parts of Chinese culture is the prevalence of WeChat, China’s essentially sole social media app. I have a WeChat group for all of my classes with the professors in them. As soon as this stats test was over, the TA sent a message in the group saying we would get the test back probably sometime around next week. Immediately, a classmate asked “Is it getting curved?” And then the chat blew up in memes. There were lots of pictures that said something along the lines of “Teacher, please give more points.” Quite a few pictures of people crying or being worried. My favorite was someone had taken our school logo and under it usually says “北京大学” but they photoshopped it to say “北京退学.” An English equivalent might be something like taking Vassar’s VC and then under it writing “Vassar I-want-to-drop-out-of College.” In the middle of the memes, the TA is trying to answer the student’s questions.

“The midterm itself isn’t getting curved. But the class gets curved at the end.”

“Will the professor curve it so everyone passes?”

“Do people still fail in the end?”

“I heard the professor doesn’t fail anyone. Is that true?”

“Uh, that I’m not sure about. You’ll have to ask him yourself.”

All of this happened in 5 minutes right after the exam ended since everyone was in there until the 2 hours was up. Luckily for me, none of these classes get factored into my GPA. So, I am not as worried as my classmates are. I just need to pass this class which sounds like it might be a given according to my classmates.

This WeChat group chat feels a little foreign to me. I can hardly imagine not contacting professors through email. But it’s very different over here. One of my professors actually never responds to his email, despite saying that he can be reached by email at any time. WeChat is so convenient to everyone that even administration tells me to add them on WeChat if I have any questions. And Chinese students have the audacity to send memes with the professors in the group chats! The professor never responded, but it does make me wonder how often they check the group chat. I wonder what they think.

The convenience of WeChat doesn’t stop at connecting with people. China has standardized mobile pay. Everyone either uses WeChat Pay or AliPay. Credit cards are almost never accepted. If you try to pay in cash, people look at you funny. A lot of the time, they won’t have enough to give you change because no one uses cash. So, sometimes they might just have to WeChat Pay you the difference. I personally am in love with it. I don’t have to carry my wallet around with me. I am a very forgetful person and would constantly leave behind my wallet in America. You’d think that having my driver’s license in there would be a strong incentive to bring it since I practically drive everywhere. And yet, I still manage to forget it (please no one tell the cops). Because of WeChat Pay, you can also just Venmo people through WeChat. Everything is on this one app and it’s super convenient.

Aside from that, China also has a really convenient food delivery system. Delivery fees are practically nonexistent (anywhere from free to like $0.30). Restaurants run sales daily which makes no sense to me. I have no clue how this business model works. I can’t fathom where they are profiting. The restaurants or the Chinese UberEats (called MeiTuan). I can get a meal delivered to me for like $3. I can even get bubble tea delivered to me for like $2.50. I really can’t make any sense of it, but I guess I shouldn’t be complaining. As it continues to get colder, you can bet that I will be ordering takeout more and more frequently.