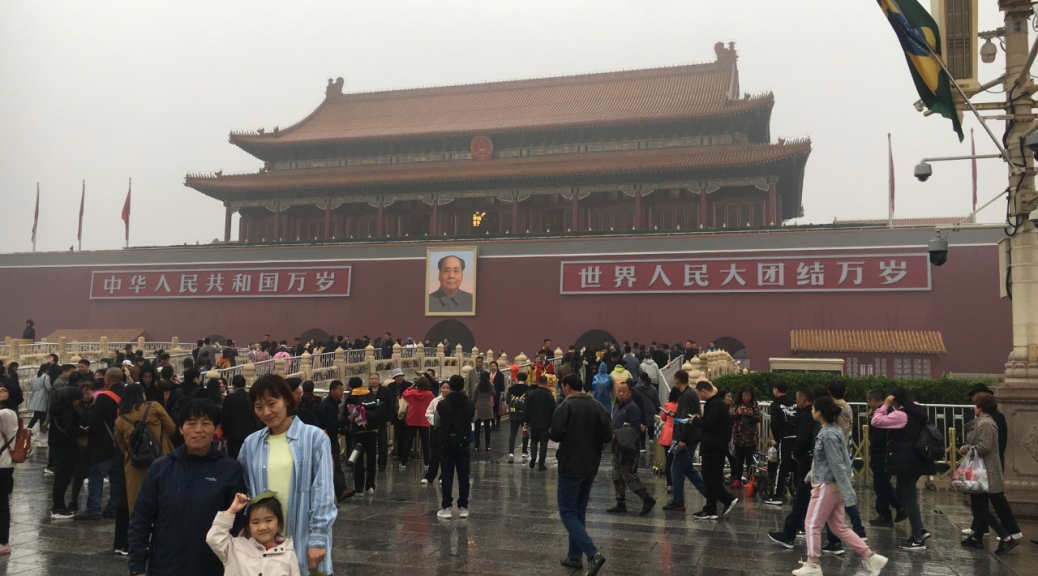 Featured image: Iconic pic of 天安门 (Tiananmen), complete with a photo bomb of a cute family. SO, so busy that day.

Beijing is weird. Can I say that? I’m gonna. Beijing is weird. My hometown, Buffalo, NY, is not a huge city. Poughkeepsie is even smaller, so I’m not used to a city that’s so big and is full of so many different things and people. Also, the content in my Chinese course is slowly approaching more and more complex and sensitive topics, which is exciting and a little scary. If I’m being honest, I thought my Chinese was bad before I came here, and not just in a modest or shy way. I just didn’t have the ability to do things like talk to strangers about random topics–let alone taboos in China or America–in Chinese. Being here has certainly equipped me with those skills, which feels a lot more like fluency than it did before.

This last break I was not as active as I was hoping, but I still went out and did a lot. First off, my friend 嘉宁’s parents came all the way to 北京 (Beijing) to visit! This would normally have nothing to do with me, but her parents don’t know any Chinese, so we went to the airport together to pick them up. Because of this, I got to go to a lot of touristy things with them that week that I hadn’t yet had the chance to do here. First, we went to 天安门 (Tiananmen), which was neat and super busy, but I don’t think I was surprised by the volume of people since there’s always crowds at these kinds of tourist spots.

Admittedly, a highlight of my break was my first ever trip to Uniqlo. Non-Chinese brands are usually crazy expensive here, but the clothes there were so affordable and so comfortable (this isn’t an official ad or anything but if Uniqlo wanted to drop me a line… 可以). I also had some of the best 北京烤鸭 (Peking Duck) I’ve ever had which was fantastic. After the 烤鸭 we found a Cheesecake Factory (?). And that was easily another highlight of my week. To be honest, this was the first time I’d gone to a real Cheesecake Factory, so I didn’t have much to compare it to, but it was the best cheesecake I’ve ever had.

Ok, so I thought I wasn’t going to, but I must go on a short tangent about stuff I miss from home. It’s impolite to pet strangers’ dogs here? Or, at the very least, dog grooming isn’t a big thing so they’re usually a lil’ dirty and/or not vaccinated, so you shouldn’t which is so sad, because I hadn’t realized the volume of dogs I pet on the regular at home. Also, from being at Vassar, I miss the Halloween buzz! Halloween is simply not celebrated at all in China, so I bought some candy from a nearby 超市 and kinda just went for it. Also, peanut butter? Big time. There are countless other things I miss too, like the lack of air pollution, my friends, loved ones, future housemates, all of it. I know I’m going to be reading this again in a couple months and be thinking about all the stuff I miss about Beijing that I’m not going to be able to get back to any time soon, but for now I would die for an omelet and some toast.

Oh my gosh, I nearly forgot Beijing Pizza Fest. I trekked far to the east side of Beijing in 三里屯 to a pizza fest where I had a boozy apple cider, bought a toga, and ate a 包萨 (a 包子, but the inside was 披萨 pizza filling). Any dedicated followers of my blog would also realize my friend Oshana (c/o ’19) is also here in Beijing pursuing a master’s at 人民大学. She invited me to watch her rugby team’s last home game, which was one of the first rugby games I’ve ever been to and it was super fun. Like I said, Beijing is full of places to go and things to see.

The last and coolest thing I did these past couple weeks was go to the 798 Art District in northeast Beijing. 798 used to be a big 电子工厂 (electrical factory), so it’s basically a huge area of countless art galleries. Bonus points, we went during China fashion week. I saw a lot of cool art; my favorite was a video of stampeding sheep projected onto the inside of a yurt. It reminded me of a poem I studied in my 古代汉语 course here, “风吹草低见牛羊”. I can’t describe it as well in English, but it’s from a poem about Inner Mongolia, the line is about how the grass used to be so tall that when the wind would blow, you would be able to suddenly realize there were cows and sheep standing in it. Don’t look now, but I might be into Mongolian poetry suddenly? Oops.

I should wrap up–tomorrow I have plans to get up at 5:40am to go see the sunrise over the trees of 香山 (Fragrant Mountain), because now that it’s finally fall, all of the leaves will have turned red and yellow. Should be worth the time. See ya later, hopefully next time you hear from me it’ll be finals. 🙂