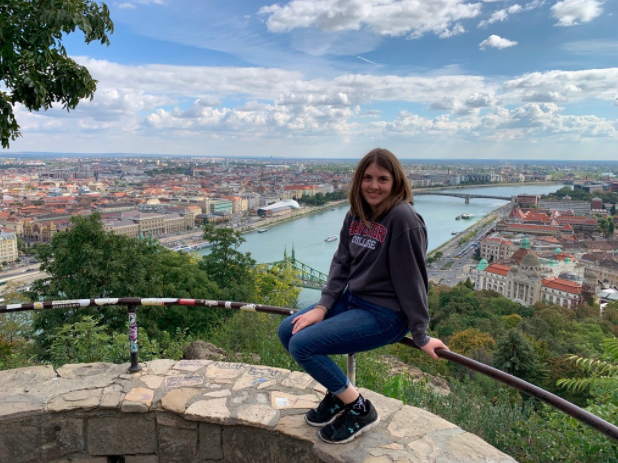 Featured image: Pictured above is the view from Gellért Hill. This hill was named after Saint Gerard who, according to legend, was assassinated by being rolled down the hill in a barrel.

It’s crazy to think that my time in Budapest is officially halfway over, but here I am, waiting to catch a plane to Athens for a sorely needed fall break. I’m stuck between feeling relieved and disappointed. I’m relieved since this means that midterms are over. Four out of my five classes had exams, so as you can imagine, it was a long week. On the other hand, I’m disappointed since I feel like I’ve just found my stride here. Since arriving here a couple of months ago, I’ve fallen into a bit of a routine and find myself visiting a handful of places regularly.

One of these spots is Madal Cafe, a coffee shop about 15 minutes from my apartment. Most Tuesdays and when I’m in the city for a weekend, I like to buckle down there with an iced latte and study till I run out of steam. I’ve been going there since my first month in Budapest, but it wasn’t until a few days ago that I was asked if I had a loyalty card. I’m assuming I was never asked before because the people working there didn’t think I would be in Budapest long enough for it to be worthwhile. I’m not sure if this time was different because the barista recognized me or some other reason, but that interaction left me feeling like I was finally more than a tourist. However, just because I’ve stopped feeling like quite so much of a tourist doesn’t mean I’ve stopped doing touristy things altogether. Over the past few weeks, I’ve gotten the chance to go on a number of trips and excursions in and around Budapest.

On the first weekend of October, my parents came to visit. After I showed them around a bit and we hiked up Gellert Hill, we drove out to Eger for the weekend. We spent our first day exploring Eger Castle, which is known for repelling the Turkish attack in 1552 during the Siege of Eger, and visiting Szépasszony Völgy, or “Valley of the Beautiful Women,” to taste some Hungarian wines. Our second day was devoted completely to hiking. We drove over to a neighboring town that had several trails with gorgeous views. Though it was a bit rainy, I’m really glad we decided to get out of the city for a bit and explore a different part of Hungary.

The next weekend I stayed in Budapest to take part in a Full Stack Development crash course hosted by AIT. The course was free since this year was a trial run, which was nice. That weekend also happened to be when the annual chimney cake festival was held, so I headed over to the festival after the first day of the boot camp with some friends. I don’t know exactly what I expected, but the festival was a lot bigger than I thought it would be. In addition to chimney cakes (which were delicious), stands were also selling everything from bratwurst to puppets.

The most cultural experience I’ve had so far was when my Hungarian class took a trip to the Szentendre Skanzen Village Museum. It’s an open-air museum that has examples of Carpathian folk architecture and exhibits that feature how people live in various areas of Hungary. I’m not entirely sure how authentic our experience was, but I had a lot of fun making candles and frosting gingerbread cookies.