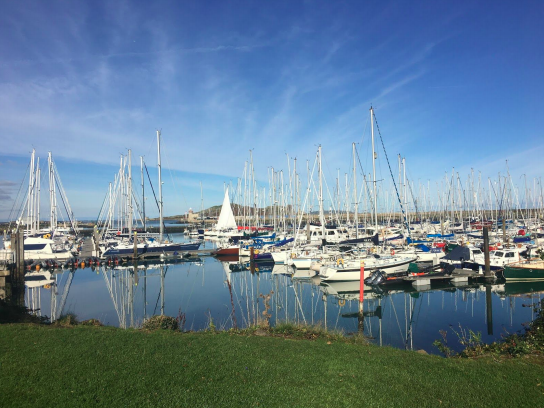 If you’re like me, a little shoreline gal from coastal Connecticut, you probably aren’t too keen on city living. I feel you! You’re heard! Although it’s pretty sleepy around here, if you aren’t awoken at ungodly hours by cranes dropping large metal beams without a care in the world, then you aren’t living in central Dublin.

Instead of fall break at Trinity, there’s something called “reading week”; a week where you’re supposed to catch up on all the reading both you and the academic administration knows you weren’t doing. Essentially, it’s like Vassar’s fall break but shorter and slightly more disappointing. I sure did put my reading week to good use, and thought instead of doing any work whatsoever I’d make it Halloween themed and visit every macabre and slightly spooky attraction I could squeeze out of Dublin (oddly enough, that seemed to entail a lot of naturally preserved mummies and dead people).

My first stop was the Killingham Gaol, a jail used for the execution and
imprisonment of the Easter rebellion conspirators among other political prisoners. Politics, super spooky. It was definitely an interesting tour, though, but it got a little bit too depressing when the guide informed us that exactly on the spot we were standing near the beginning was the execution site of about sixteen people. A very strange way to start a Monday morning.

My second stop was to see the bog bodies of the Irish archaeology museum for approximately the fifth time since I’ve been here. For being in an Irish bog for 3000 years, most of the bodies have better-kept fingernails than almost all of the living teenagers I know (probably a higher level of hygiene also). The process of bog body preservation is incredibly complex and only happens in several parts of the bogs of Europe, and more often than not they are preserved with their hair and clothes still intact. The bog body with the biggest flex, in my opinion, is the Clonycavan man. After 1000 years, his fresh topknot containing the remnants of imported French resin gel is still almost perfectly intact. I’d like to imagine that the fact that his hairstyle, a hairstyle that obviously took him a great amount of time, outlasted all the crusades would make him extremely happy.

My final stop was a trip to the Irish natural history museum, AKA the worst
taxidermy capital of the entire planet. The building itself hasn’t changed in about 200 years, and I’m pretty sure they haven’t received any new additions in that time period either. Because most taxidermists of the 17th and 18th centuries had no idea what the animals they were working with looked like in real life at all in any capacity, the results of their labor were, simply put, not good. I feel bad for laughing at their work, but some of them are so bad they will most definitely haunt your nightmares for the rest of your natural life. I have included several of my favorite examples.

In addition to weird taxidermy, the museum was also so poorly run to the point of being a little funny. You’d be walking along and you’d notice several of their precious gem displays just fell in their case and the display cards were simply placed next to the fallen exhibit. I’d call that next-level efficiency for sure. However, maybe I’m simply just not advanced enough to
understand their organization methods, I’ll guess I’ll never know.

Goodbye from Dublin—someone please send American KFC, I am desperate.