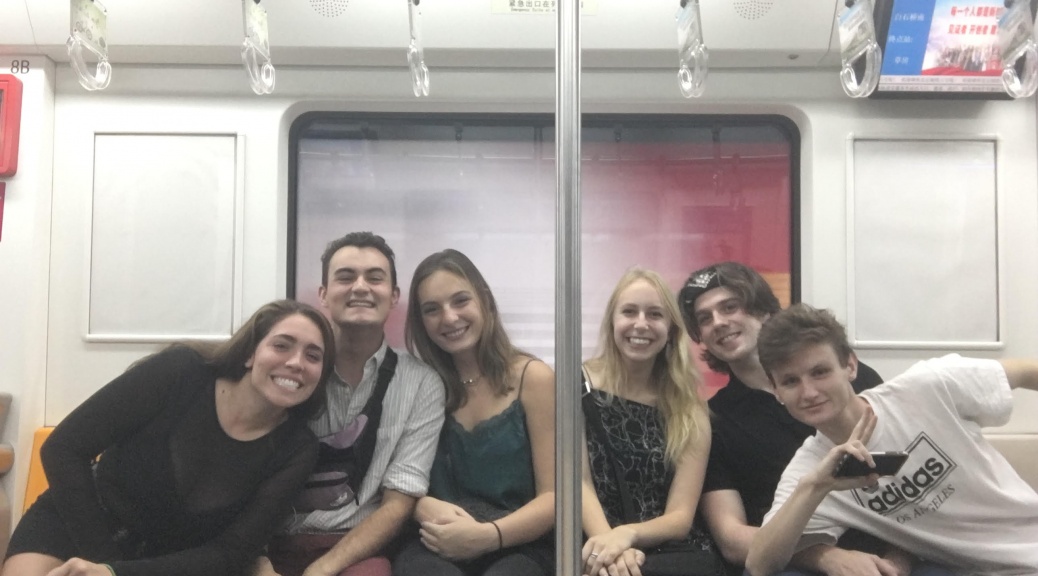 Featured image: A Self-time Study, Taken On an iPhone on Beijing’s 地铁, On 6号线. I would say a success?

As of right now, I’m officially halfway through my time here in Beijing. I kind of can’t believe I’m saying that and that I’ve come this far. Today I took my last midterm and I’m about to start my October break. I must admit, since I’ve last written I haven’t done anything as 厉害 (impressive) as hiking the Great Wall at 5am, but it’s still been cool.

I guess I’ll start with the routine I’ve settled into. I get up at about 7am each morning, shower and get ready, then I head over to a local coffee shop and prep for the day’s class. Each day we start class first thing with a quiz, so I always make sure I’ve got all the new grammar and vocabulary down. Usually while I’m at the coffee shop, my friend 周敏, and my only classmate (yes, single classmate, for all my classes), 达礼, are there too. We have some good early morning conversations, usually chatting about how bogus some new grammar is or what we plan on doing for our weekly oral examination’s presentation section.

Then, I head to the dining hall and grab some breakfast. Breakfast is a bit of a wild card. I order a 包子, which is a bun that could have any kind of filling, and I’ve figured out how to say some of them, but sometimes I’m seriously unsure what’s inside.

Then, I have classes from 8:40-11:40am, which are my regular Chinese and Ancient Chinese courses. I eat lunch around noon, usually with 冬梅 or 爱碧. I go back to class at 1pm, and in this class, which is about news and current events in China and abroad, I have a presentation on a journal article of my choice every other day (because I only have one classmate, haha). Unfortunately, I usually pick American news (“unfortunately” because American news has been crazy recently). One thing I appreciate about my program is that my professors are totally open to explaining China’s viewpoint on any issue, especially sensitive ones, so I’ve presented about Hong Kong a few times already. After this, I sometimes have my one-on-one class with 霍老师, maybe one of my favorite professors at my program. I usually go to the gym after that, row on an honestly sort of lame erg machine, grab dinner, and then do my homework.

Besides this ridiculously exciting routine of going to class, eating, and studying, I also actually do other things sometimes. A few weeks ago, I went to the Beijing Botanical Garden, which was beautiful. There’s an entire section of the compound that is just roses. They came in all different colors, which was impressive. I also went to a couple of cool parks during Golden Week (国庆黄金周), which is a Chinese national holiday, as well as an awesome café with free Wifi that was in full view of a beautiful white pagoda and temple.

As a part of my courses, we have a section called a Language Practicum, on which we go out on an excursion as a class (all two of us) with our teacher, and interview people living in Beijing on a certain topic. We went on one of these Language Practicum outings to Beijing’s historic 胡同’s (historic architectural style, shaped like long winding alleyways) and a 四合院 (this one really doesn’t translate, it’s a building style inspired by Fengshui and the compounds are rectangularly shaped), and we asked the people living there about their experiences with and opinions on the clash of Chinese traditional culture and modernism. The 胡同 we visited was over 800 years old, and one man living in it told us that half of the 胡同’s in that area were demolished by Beijing’s local government during the Cultural Revolution. Now, historic buildings in China are protected, but it’s chilling to imagine the generations of history and culture that were swept away under the wave of modernization and, ultimately, Westernization.

I’m honestly astonished at how many good friends I’ve made here in just seven weeks. I haven’t even begun to contemplate adjusting back to America in December in addition to missing the new friends I’ve just made. We’ve gotten coffee together, dragged each other out of bars, and talked about the triumphs and failures of imposter syndrome and studying Chinese. I can safely say that the people I’ve met on this program will be life-long friends of mine. I knew that going abroad would help me learn and give me the opportunity to delve deeper into another culture, but I was not expecting to find community this strong within the program itself. I guess since I’m at the half-way point, I have to start considering life after the program again, too.

This week during break I might go buy some real Western food ingredients and make American breakfast with my friends, go to the zoo, or just 补充睡眠 (catch up on some sleep). But whatever I do, I’ll be sure to tell you about it next time. Thanks for reading, have a nice week!