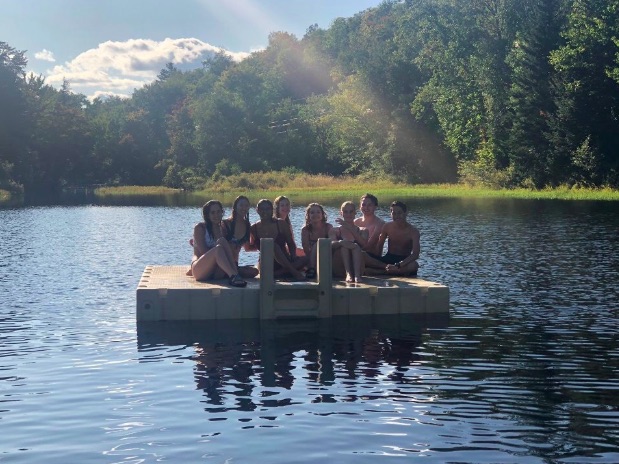 Featured image: I’ve made it my mission to have the true Dartmouth experience. This included going on first year trips, which is a pre-orientation program. I went cabin camping, which was great and all, but as a jaded junior I was ready to go home and stop playing the game where you stand in a circle and leave a shoe on the ground and then run if the person in the center says something that applies to you.

My study abroad location is significantly less exciting than the majority of my friends. I’m in the faraway place of Hanover, New Hampshire. And yet, despite still being in the United States, studying engineering at Dartmouth has been quite a culture shock. (P.S., for those who haven’t been following my college and writing career, I am currently doing the 3/2 engineering program at Dartmouth.) I started in the summer with 12 other students. One other girl, 11 guys, and me. Being one of two girls in this program was and still is really lonely.

Instead of wallowing in my loneliness, though, I’ve been frequenting Starbucks. I have the app on my phone; however, I’m actually signed into my mom’s account and have been mooching off her and using her free drinks. Unfortunately it’s all under her name and I’ve been coming so often that they now know me as Marcia. I’ve decided to embrace it because it doesn’t seem worth it to explain the whole situation to them. At least the baristas at Starbucks know me. Well, sort of.

Even though I don’t have to take my classes in French or Spanish, it still felt like I had a new language to learn. I was meeting with a girl to work on our final project and she texted me “blobby @now.” I spent ten minutes trying to decode this cryptic message, to eventually figure out I was supposed to immediately meet her in the Baker Lobby (the lobby of the library), hence Blobby. “FFB” was another baffling term. What could that even mean? First floor Berry (the other part of the library). FFB is where you go to be Facetimey (aka instead of studying in FFB, you go to socialize with other people who, like you, should probably actually be studying).

They also refer to people by their class year. Not like sophomore or junior, but the year that you graduate. For example, the seniors are 20’s. I constantly get asked what are you and the saddest part is I don’t know. Am I a 21 because that’s the year I’m actually graduating/am the same age as the 21s? Am I a 22 because I’m graduating from Dartmouth in 22? No matter what I say, I always feel like I’m lying to them. But how I am supposed to go into my detailed D-plan (a plan consisting of the terms that you are actually on campus) and my two colleges life story while the music is blasting in some frat basement. The poor frat boy is just trying to have an uncomplicated hook-up. He doesn’t want to hear my ten minute sob story.

Probably the biggest culture shock was Greek Life. It dominates the social scene here. I’ve spied on a couple admissions tours and apparently 70% of those eligible to be part of Greek Life are affiliated. While most of the other dual degrees (3/2 engineering students) just spend every waking hour in the Engineering building, I wanted to try and be an active student and get the full Dartmouth experience. This meant rushing. Rush was over a week and a half long, where you travel around to each of the sorority houses and get judged on ten minute speed dates with a couple of the sisters. I really f’d up at Chi Delta when I went off about writing horoscopes for the humor & satire section of the Misc, detailing their weirdly sexual nature and how they were occasionally about vibrators. Suffice it to say, I did not get into Chi Delta.

However, I have become a basic sorority girl. Now I go out Wednesday, Friday and Saturday nights because that’s what the cool kids do here. I will be living in my sorority’s house in the winter (to get away from my roommate… Shhhhh… Don’t tell her).

The worst part of Dartmouth is the hundreds of emails that we get three times a day from the campus events listserv. I’m sorry but I don’t care about Moosefest 2K19 and I don’t want to get four emails about it. The best part of Dartmouth is that they have a smoothie bar where you can order any combination of fruit and liquids (including soft serve). Don’t worry, I filled out Carlos’ google form detailing problems with Vassar to bring up with the trustees. I made sure to get the point across that setting up a smoothie bar should be the College’s highest priority for the next fiscal year. You’re welcome.

Tonight there is a 29-foot-tall bonfire in the center of campus in celebration of homecoming. It’s tradition for 23’s (first years… I know, more slang. I’m so sorry. Now you know how helpless and lost I felt) to touch the fire while they run around it. However, last year the town of Hanover, told Dartmouth that they could no longer have the bonfire if people continued to attempt to touch the fire. Consequently, we’ve gotten daily emails instructing us not to touch the fire or yell “touch the fire” at the first years (which is honestly something I still fully plan on doing). They even sent our parents an email telling them to tell us not to touch the fire. What are my parents going to do to stop me from touching the fire though? Ground me? Not pay for my friendships (aka my sorority dues)? Tell me that my sister is actually their favorite child? Log me out of my mom’s Starbucks account and take away my only form of human interaction?