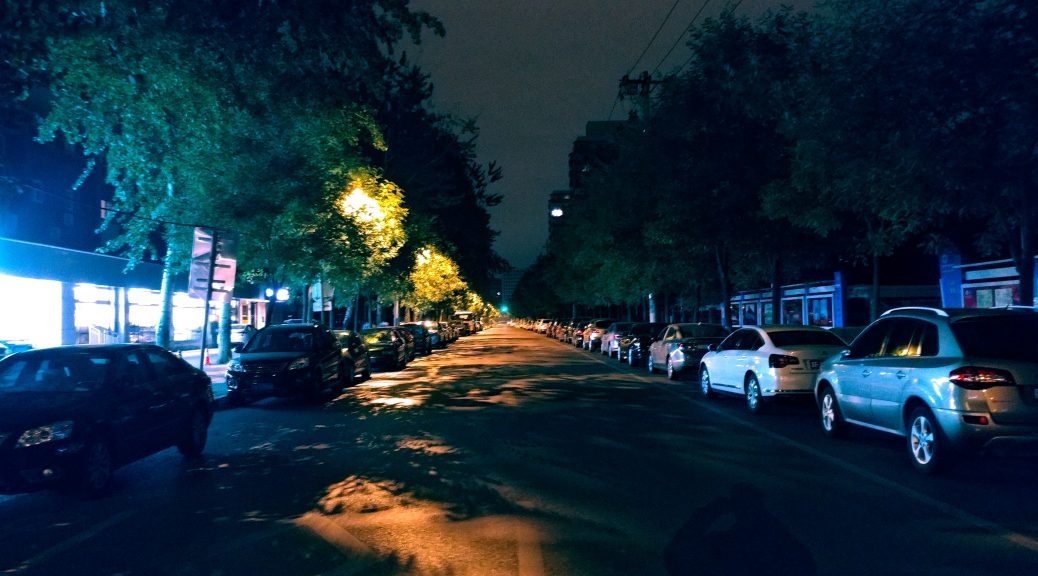 Featured image: The only time I find peace and quiet is on my walk home at 1AM.

One of the biggest adjustments I had to make was living in a place full of people. No longer was I at Vassar, a small liberal arts school. No longer was I in Poughkeepsie, a town in the boring mid-Hudson Valley. Instead, I was at a big school in one of China’s largest, most overcrowded cities. China in general is overcrowded and Beijing really suffers from that. When I was in Chinese 305 at Vassar, we talked about China’s population problem. There was a whole chapter practically dedicated to talking about traffic. I thought that was a little weird. I’m from New Jersey, one of the most population dense states, and I’ve driven in New York. I know what traffic is like.

I know now that it’s no exaggeration. Back when I first arrived, my dad and I were talking to my cab driver as he took us from the airport to my school. As soon as we merged onto the highway leaving the airport, we hit heavy traffic. We hit more traffic when we exited to one of the major roads, and more still as we took our exit to another road. It doubled our trip time from one hour to two hours. My dad was surprised to see all of the congestion as it wasn’t quite rush hour yet. Our cab driver reassured us there was traffic all the time in Beijing. It didn’t matter the time.

Luckily, Beijing has a subway system that covers a good majority of the city. It also has an extensive bus system for any place you can’t reach by subway (though, I try to avoid taking the bus because it too is prone to traffic). But even public transportation is crowded. I have only ever found a seat on the subway when it was one of the last trains around 10:30pm. They stop running at 11:00pm. And even that is not guaranteed, depending on if it’s a weekend or not. During rush hour, everyone tries to just barely squeeze in, even when it clearly seems like there’s no more space.

There is no escaping the crowds especially since I also go to a big school. The best I can do is go back to my room where I have two roommates. If I want to be alone, I just have to hope my roommates are off doing something else. My smallest class is 30 people. My largest is a little more than 100. The campus is busy when it comes close to class time as there are crowds walking, and a bunch more biking. I managed to find a longboard on campus, but it is much harder to get around this campus than Vassar due to the sheer amount of people I have to go around while trying not to get hit by a car or electric scooter. Dining halls get very busy very quickly. I once tried to grab steamed buns as a quick breakfast before my 10am, but this must be a popular idea because the line got too long for me to get the buns and still make it to class.

On the bright side, however, because there are just so many people in Beijing, there are bound to be people who are also into whatever hobbies you are into as well. My school surprisingly has a frisbee team, which I joined. Beijing has a Smash scene and weekly tournaments that I go to. I’ve even found people playing one of the most niche things I am into: rhythm games. Anyone who has talked to me this summer probably knows that I really got into DDR and similar games. While there is no DDR here, there is a Pump It Up machine which is a similar concept but with five buttons instead of four. There is a legitimate queue for this machine. The only time I can get it for myself is if I go in the morning or early afternoon on a weekday. It is certainly nice to see and meet other players, even if it intimidates me a little that they are all better than me. But I do miss being able to go whenever I want in America and almost always having it to myself. The average skill level is also lower in America, so it was definitely easier to impress people. Not that I am playing the game to try to impress people. But it was a nice bonus.

That, plus the fact that the city is actually dead around nighttime because most Chinese people go to sleep by 11PM makes it bearable. As an introvert, it’s really peaceful to be walking back at night and seeing the streets almost completely empty. I had forgotten about how much I hate crowds until I got here. But I am certainly enjoying the opportunity to meet lots of new people.