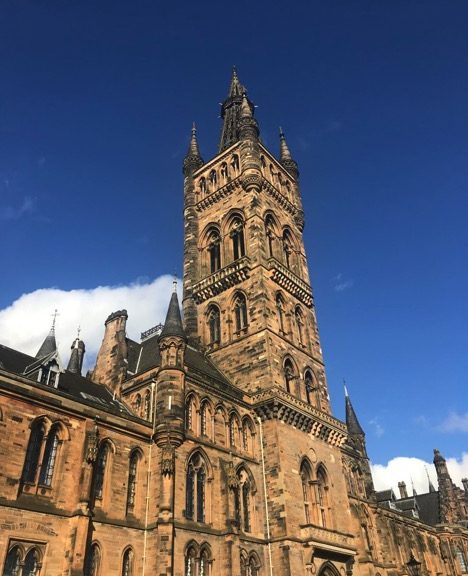 Featured image: Where I am studying, the University of Glasgow!

3:00 in the afternoon. Slowly sipping my iced Americano, I gazed out the glass window—a light drizzle cascaded from the stratus clouds. I arrived at Glasgow Airport after attempting a two-hour snooze on my layover flight from London. Feelings of unfamiliarity began to stealthily crawl up my back.

Along with a group of international students, five of us took the coach service to Kelvinhaugh Street. After we collected our suitcases, we looked at each other in a daze.

“The email they sent told us to visit Cairncross House to check in for our keys,” I responded. Knowing where to go was the easy part, but how to get there was a completely different story. None of us had phone service, and the campus map appeared as if it were communicating in Latin.

The five of us, like Sisyphus with his giant stone, rolled our hefty suitcases toward Teviot Street (which, at that time, we didn’t know was the wrong direction). We managed to almost reach the top of the hill. Alyssa turned her head left and right, looking for street signs.

“Are you all looking for directions?” We turned our heads towards the dainty voice. A local resident came up to us with her black iPhone.

Alyssa’s emerald-green eyes brightened up, “We’re looking for Cairncross House.” The resident searched up directions and guided us towards Argyle Street.

As we dragged our heavy luggage west under the opening heavens, I knew there were more dark alleys down the road. This excited me. When it pours instead of rains, one’s personal growth is truly catalyzed.

Surely enough, we were met with another dark alley. Once we placed our bags down, my mind remained stuck on vibrate and I couldn’t calm it down. I thought back to my arrival in London—border patrol had sent me straight through the ePassport gates, the automated immigration kiosks. When I asked them about meeting with an immigration officer, they still directed me towards the e-gates. Thinking that I’d meet the immigration officer at Glasgow, I got on the airplane.

Once I got off the airplane, we were sent straight to the checked baggage area. I realized that I never got my student visa stamped. My heart raced.

After hours of researching and emailing my program’s International Student Adviser, I figured out that I had to leave the United Kingdom and apply for the Short Term Study visa by seeing a UK Border Officer upon my return. Otherwise, I could only study for 30 days.

Acknowledging that courses started within a week, a pulse of adrenaline had me on rear-ended going 100 down the highway. I immediately began looking for the cheapest flight possible on Google Flights. Click. Click. Click. Shifting from date to date, I eventually found a round-trip ticket priced at $121 to Berlin.

Next was figuring out where to live. I started looking for hostels on Hostelworld, but because I was on a strict budget, the mixed dorms that housed eight people was the only option. That didn’t seem safe to me at all. What if my wallet got stolen as I slept? Passport? I was about to travel alone to a brand new country in Central Europe where people spoke a language I had absolutely no exposure to.

Then, I remembered—Mari, a friend of mine who also attends Vassar. She is currently studying abroad in Schlachtensee, the southwestern part of Berlin. I immediately messaged her to ask if I could stay over for a night. That sharp feeling when you miss a step walking down the stairs was mitigated when I saw the words, “You can stay over at my empty apartment,” on the screen. Thank you, Mari. You’re an angel.

I finally sipped a bit of air after being underwater for several days. Feelings of uncertainty led me to wonder: did Chinese immigrants feel similarly, if not worse because of language barriers while starting a new life in the United States? I began thinking about the history of Chinese immigrants freshly arriving in Manhattan Chinatown.

In the 1850s, a Cantonese businessman named Ah Ken allegedly arrived in Manhattan Chinatown as the first Chinese immigrant. Upon arrival, he successfully founded a cigar store on Park Row. Ah Ken supposedly kept a boarding house on Mott Street—he was a landlord who rented housing to other Chinese immigrants.

Around 30 years later, the Chinese Exclusion Act was passed to prevent Chinese laborers from entering the United States. The Chinese Exclusion Act of 1882 was the first immigration law that barred an entire ethnic group from immigration. This immigration law left several harsh consequences. For instance, Chinese women lost their citizenship by marriage to a partner who was an alien ineligible for citizenship. Ng Fun Sing is a prime example. Although she was born in Washington State, she had been denied entry to the country of her birth because immigration officials believed her to be a Chinese subject ineligible for American citizenship.

Social factors that led to the passage of the Chinese Exclusion Act stemmed from economic and cultural tensions, as well as ethnic discrimination. Since there was an increased number of Chinese citizens that immigrated to California following the Gold Rush of 1949, non-Chinese mining laborers saw this as competition. With increased resentment, non-Chinese laborers used xenophobic protectionist tactics to squeeze the Chinese laborers out of their jobs. California state government also passed a series of measures aimed at Chinese residents, such as requiring special licenses for Chinese businesses or workers to prevent naturalization.

As a result, the chances of first generation Chinese immigrants earning a living wage were little to none. Facing strain from racial discrimination, many Chinese immigrants from the West moved to Manhattan Chinatown to seek employment. Where they would live the next day? When would their next meal be? Will I see another tomorrow? I imagine these thoughts to be roaming through their minds as they moved. By around the 1900s, there was around 7,028 Chinese males in residence, but only 142 Chinese women in Chinatown.

By the 1990s, my grandfather and second eldest uncle immigrated from Taiwan to Manhattan Chinatown. They started off with a small business to sell assorted goods. Eventually, they managed to open a successful restaurant and earned enough money to purchase housing. My second eldest uncle and aunt married had my awesome Asian American cousins who are living beautiful lives now.

The feelings of anxiousness had propelled me to share and acknowledge this part of Asian American history because we are not taught about these perspectives in U.S. history. The Asian American experience is not just the model minority myth—there’s more. It bears several withering marks of traumatic racial struggle. Even though Asian Americans have been a crucial part of the America’s economic growth, there is still not yet curriculum taught to highlight this narrative. I’d like to take this time to express my huge appreciation for the Asian Americans who stepped ground in a foreign country with the utmost bravery and determination to start a new life.

I am very appreciative of the unpleasant state of inner turmoil I experienced during the first few days in Scotland. Why? I am hopefully able to empathize a bit more about what feelings immigrants experienced after they traveled to the United States. This emotion has offered me clarity: I must increase healthcare accessibility for immigrants who worked tirelessly and sleeplessly to grant their children the gifted lives they have now. This is my way of giving back and expressing gratitude towards the blood, sweat, and tears they’ve endured to bring better lives for their future generations.