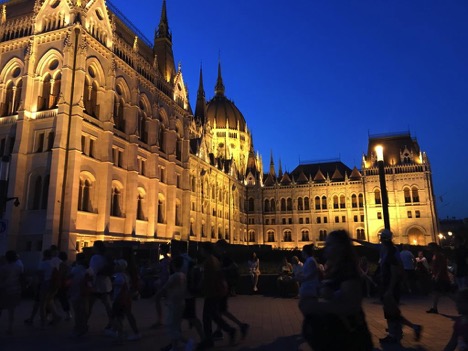 Featured image: The Parliament building illuminated at night. Fun fact: Parliament is the tallest building in Budapest as it is illegal to construct a building taller than it.

As I assume most students studying abroad do, I spent the week before I left obsessively Googling anything that might go wrong. By the time the car was loaded and I was on my way to the airport, I thought I was prepared for anything. That feeling lasted until my mom asked me how I was paying rent for my apartment. Abstractly, I knew I needed to pay rent every month in cash, but I hadn’t made the connection between that and needing to bring cash with me. This led to a last-minute scramble, but we somehow managed to figure everything out before getting to the airport.

All students attending AIT were given the option to arrive in Budapest two weeks early for a language crash-course run by the Babilon Language School. I decided to attend as spending two more weeks in Budapest sounded a lot more fun than working another week, and I’m glad I did. While I’m certainly not an expert in Hungarian after taking the course, I did manage to pick up some essential phrases such as “Nem beszélek magyarul” and “Tudom házi kedvencét?” (“I don’t speak Hungarian” and “Can I pet your dog?”). Moreover, the course gave me time to get used to living in Budapest, which I absolutely needed.

Adjusting to life in Budapest was hard at first. I’d never lived in a city before, let alone one in a different country. There were a lot of moments where I questioned why on Earth I didn’t just stay at Vassar. I didn’t leave my apartment alone my first week out of fear I’d get lost, or someone would try to talk to me in Hungarian.

There were several small differences between here and home to adjust to. For instance, the outlets are different here. The first mistake I made in Budapest was trying to plug in my power strip using a converter. Bad idea. I shorted out the power to my room twice and the whole apartment once before giving up. Silver lining: my roommates and I all know how to use the breakers now.

Shopping for the first time was a whole other issue. When I first walked into a grocery store, I was overwhelmed as literally everything was labeled in Hungarian, and only a few things had an English translation. This wasn’t a problem with things like fruits and vegetables, but for most foods, I had to rely on the pictures. This resulted in me buying pinto beans instead of black beans, cornmeal instead of flour, and powdered sugar instead of normal sugar.

Since then, though, I’ve come a long way. I haven’t shorted out the power once since the first week and shopping’s gotten a lot easier. I’ve started to settle into my life in Hungary, and I’ve been having a great time these past few weeks.

My first attempt at traveling outside Hungary, on the other hand, was… an experience. Here’s a piece of advice: when you make plans to visit a friend in another country, make sure you actually know which country they’re studying in. I didn’t and, as you’d expect, that didn’t turn out great. It wasn’t until the night before I was supposed to fly out that I discovered my friend was not in Copenhagen as I’d thought for whatever reason, but in Dublin, literal countries away. Don’t ask me how I got that wrong, but I did, and I only realized it when she sent me the location of her apartment.

Somehow I managed to find a last-minute flight to Dublin, and once I actually managed to get to Dublin I had a fantastic time, but by the end of my trip, I was a bit paranoid about anything involving transportation. Besides the whole Copenhagen debacle, I got fined 45€ by a ticket inspector late at night because of a misunderstanding about how the tram system worked. Awful experience. 0/10. Do not recommend.

Therefore, before leaving to catch my flight back to Budapest, I checked my route to the airport several times, made sure I had plenty of euros on me and left about an hour earlier than I usually would. Alas, Dublin was out to get me; there was a festival going on that day, so all bus stops in the area were closed. I had to wander around for about 30 minutes and ask several people for help to find a stop where my bus would actually stop.

If you’re considering studying in Dublin, please don’t change your mind because of this post. When I wasn’t struggling to get somewhere, I had a fantastic time. That being said, I don’t see myself traveling outside Hungary for the next few weeks.