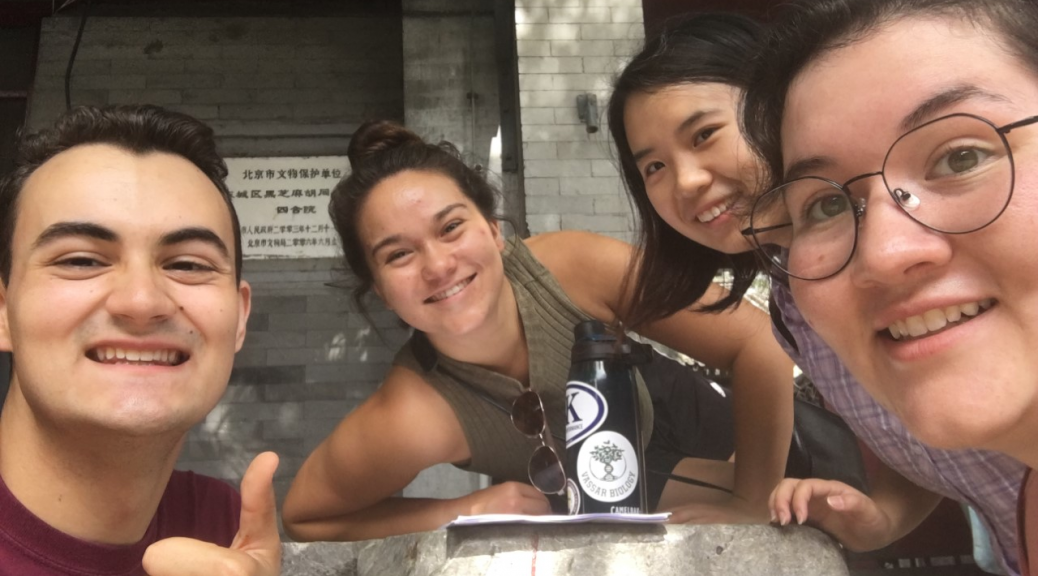 Featured image: Us after running around 南锣鼓巷, a historic district of Beijing. We rewarded ourselves after a hard day’s work with some Mexican food that honestly wasn’t bad.

Hey there folks! My name is Nick Gorman, I’m from Buffalo, New York, and I’m a Chinese and Biology double major with a correlate sequence in Queer Studies. This fall, I am studying abroad at CET Beijing’s Language Intensive Chinese Program. I’m studying Chinese at Capital Normal University, which is in Beijing’s Haidian District. I am excited to be writing for Far and Away this semester, because I think it’s a fantastic way to document my feelings and thoughts during my time abroad, and to share the trials and joys of being away from Vassar this semester.

I think the most important piece of context I can give to color my experience abroad so far would be that my program has a strict 24/7 language pledge. Basically, excluding in emergencies and when contacting family from home, there is a non-stop environment of hearing and speaking Chinese. This policy is typical of CET’s language intensive programs, and it’s honestly why I chose to come here. I have been studying Chinese for so long, but I still didn’t feel totally comfortable speaking it in day-to-day settings, so I wanted to go full-send and commit to learning it this semester. However, I’d also probably say that the language pledge has been one of the hardest parts of adjusting to life abroad.

I know that proficiency in a foreign language is a requirement of a Vassar education, so think with me for a moment the difficulties one may encounter if English is no longer allowed, and you can only work with a secondary (or tertiary), acquired language. How many words are there that you use daily that you might not know how to translate? Can you go into a store, find, and purchase deodorant? Could you argue with your new roommate (a fluent speaker) about the setting of an air conditioner? What about ask for a refund because your drink was made wrong?

Of course, keep in mind that acquiring Chinese as a second language bears with it the added difficulty that if you see a character on a product, menu, or official notice from your dormitory, and you don’t know what it says, it’s going to take a little while to figure out how to even say it out loud, let alone use it in a sentence or know what it means. Imagine getting in a taxi, alone, and realizing you don’t know how to navigate in Chinese? Like, now what?

I think I can (almost) confidently say I’m (almost) on the tail end of culture shock. Kudos to everyone going abroad, but adjusting to any Western country’s routine is just nothing like trying to adjust to Beijing. Beijing has a population density five times that of New York City, air quality problems, seemingly no actually authentic Western food, let alone American, and I’m not allowed to speak English! I have yet to find a place that will accept my Visa credit card. Last week, though, I finally was able to buy a gym membership (actually, one of the most difficult things I’ve done yet. Am I allowed to sign a legally binding contract with my Chinese name? Idk, but I did). I also learned how to pronounce a third meal in my dining hall, so now I can switch it up a bit. I’m not going to go on about it forever, but suffice to say that if I had a dollar for every time I seriously considered dropping out of my program, I’d have bought a one-way ticket back to Buffalo already.

I’m so glad I didn’t, though. This last week in my class (of one other student and me), we discussed Internet and media censorship and the right to free speech. I learned a lot about China’s legal system, nationalized industries like baking and phone service, how Westerners and Chinese citizens differ in spending habits, and I even learned a few 成语’s (idioms). Probably my favorite 成语 so far is 三人行，必有我师 (When you walk with two people, one of them will be your teacher). Also, no Western food hasn’t been a big problem because the food here is AMAZING. I can’t get over it. My teachers keep saying to me 民以食为天, which means “food is like heaven”, or “food is the primary want of man”, and they’re right.

The best part of my abroad experience so far was this weekend. We took a class trip to 陈家堡 (Chenjiapo), which is a small village in the valley of the mountains of the Great Wall. About 16 of the 25 students on my program went up, and we did a hike up an unrenovated part of the Great Wall. Then, on the second day, we went up a more challenging route, but to start the day, we all got up at 4:30am to go see the sunrise over the mountains. I’m not becoming a Daoist or anything, but going out and experiencing nature like that was so therapeutic. Another favorite 成语，天人合一 (humanity and nature are one) comes to mind. There’s something so universal about a good sunrise, with a morning moon hanging in the sky, that made me feel not so far from home after all.

So, to the whole rowing team, and to all my friends at Vassar, and to you (yes, you), I miss you a lot, and studying abroad is hard, but I’m going to get through it. I can’t wait to see you on the other side. Much love and kisses from Beijing, I’ll be sure to learn some more names of dishes before I write again. Oh, and 喝热水！