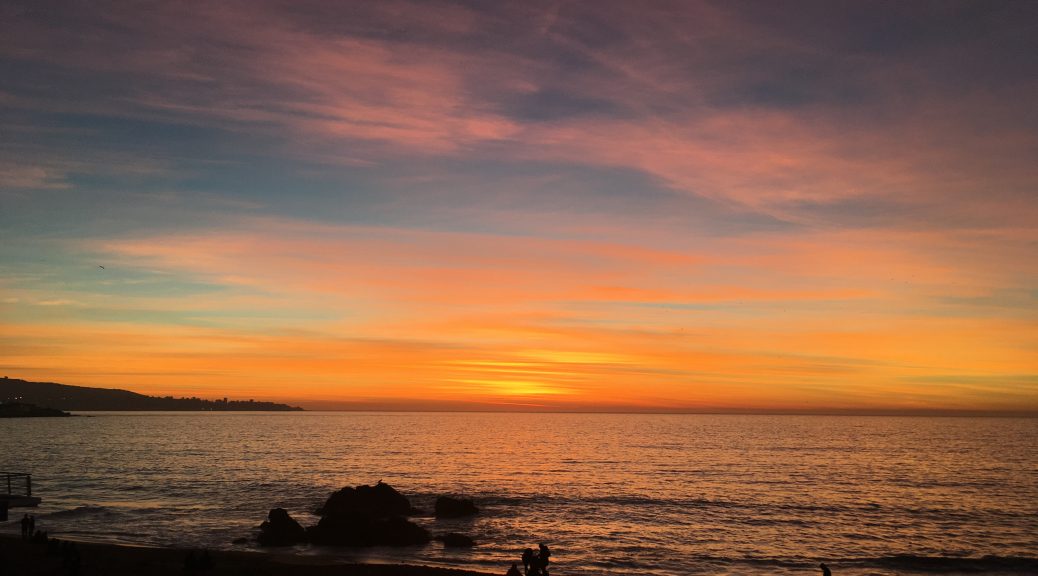 Featured image: I am IN LOVE with las puestas de sol (sunsets) in Viña del Mar.

Do you know how earth-shattering it is to realize you have been washing your hands incorrectly for the last 20 years?

The correct technique to wash my hands—let me tell you, it is a complicated series of movements and twists and paper towels—is just one of the many things I have learned during the last two (!) months of living in Viña del Mar, Chile.

As one of the two Vassar students participating in Middlebury College’s Applied Studies in Health Track, or the Pre-Med Track as we call it, I am a fully-enrolled exchange student at the Universidad Andrés Bello—located a mere 10 minutes from the beach!—and living with a lovely host family. At UNAB, I am studying nursing or enfermería alongside a cohort of Chilean classmates. For courses, I am taking two second-year nursing classes—one about familiar and community-based nursing practices and the other about caring for adults and elderly individuals and medical conditions unique to those groups. The second course also includes a lab, though our lab takes place in a hospital simulation room, complete with mannequin-like patients with detachable body parts and fake blood, sterile syringes, and everything in-between.

It is a pre-med student’s (my) dream to learn medical skills like placing IVs and administering medication, something I am unlikely to learn before entering medical school (and that has not been covered in my EMT experiences). Every day is a learning curve because: 1) I have never taken a nursing class in my life and these are second-year classes with lots of material that is review for my friends but BRAND NEW to me, and 2) words like tourniquet, needle, and newborn were not on my Spanish vocab radar before this year.

My third class is in the department of sociology, history, and social work (very odd as multidisciplinary courses are not really a thing here) focused on social movements in Chile and beyond. Through my study abroad program, I also have two half-credit classes, one about Chilean culture with the 10 other Middlebury students studying in a nearby liberal artsy university, and a writing course that is a one-on-one meeting with a writing professor where we revise my work (literally the most helpful thing ever).

I am also interning at a CESFAM or Centro de Salud Familiar y Comunitaria—Familiar and Community Health Center. which is a fascinating lens into how public (about 80% of Chilean are covered by this system) and integrated healthcare works. In my little time here, I have thought a lot about the kind of medicine I want to pursue and am now seriously considering something in Primary Care, which I found less appealing in the past. Though I intend to stick to pre-med, I feel like I am gaining an important appreciation and understanding of the art of nursing.

Though this is not my first immersive Spanish experience, this is the first time where my entire existence takes place in Spanish. Other than when I talk to my family or friends in the States (if you are my friend, know that your audio messages keep me going on the tough days), cheat on my language pledge by listening to music in English when I go running (my mom said I can indulge however the heck I want when I run), or translate unfamiliar words or phrases, every conversation, every relationship, and every joke take place in Spanish. Even when I talk to my friends from my study abroad program, 95% of our conversations are spoken in Spanish.

For the first time in my foreign language career career, I feel like I am developing the skills to hold meaningful conversations and develop relationships that transgress logistics or superficial talking points. It is wild to me because, although I arrived in Chile with an already high level of language and have improved DRASTICALLY in the last two months, I still have countless moments every day where I lack the vocabulary or comfort, or the window of opportunity passes before I can say what I want. Partially due to the language barrier and partially because a grand chunk of the time I am operating at the edge of my comfort zone, I have realized that I never feel 100% sure about anything I say. Just like in English, context is everything in Spanish. Beyond this, my educated guesses when I do not know a word or how to pronounce it are often wrong (for example, mixing up “lamenta” (regret) and “la menta” (mint). Though sometimes it is heart wrenching to have the words on the tip of my lengua, this daily experience of uncertainty is humbling. It means I listen more, I am more intentional with my words, and that when I want to show my appreciation, my actions often speak louder (and are often clearer) than my words.

Moving to a country 5,000 miles away from home, living with a host family, studying at a new university where I had zero friends upon arrival, and doing ALL of those things in Spanish has been genuinely difficult and exhausting (it is rare to find me not yawning, though the language fatigue has gotten easier). What I will say is that I have loved the rollercoaster ride of challenges that accompanies every day of my new life.

In Spanish, “intercambio” means study abroad and “peak” is the same in both languages. In my brief time here, I have had a couple of “peak intercambio” moments. Some of them include watching Benji, the only other American at UNAB, wholeheartedly participate in a cueca competition (the national dance in Chile) in front of about 25% of our university’s student population, playing a game of bilingual telephone with a group of my Chilean and American friends and dying with laughter when my Chilean friend announced some mangled version of “He sent me an eggplant I sent him a…,” enjoying the unreal stars and seeing back-to-back estrellas fugaces (shooting stars) in the Atacama desert in the North of Chile, and attending las fondas (the closest comparison would be a large carnival) to celebrate Chile’s Independence and realizing that in our group of seven people, four nationalities were represented.

When moments like these happen, I already know that I am going to be devastated when I have to leave. However, they remind me to make the most of my limited time here by living presently, letting go of the embarrassment that I will make language mistakes (and trust me I will), and taking advantage of every opportunity I can to connect with the incredible people around me.