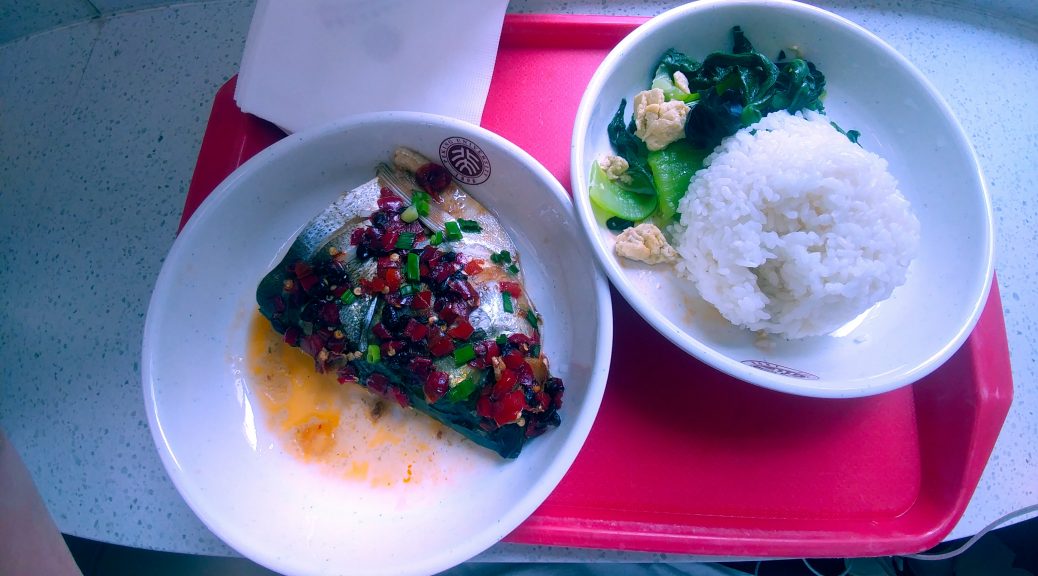 Featured image: I had this for lunch once. I thought it was wild they were just handing out these chunks of fish. It was delicious though. Only 15 RMB.

When I talk to my friends or family, they of course ask “How’s China?” And all I can talk about is the food and how everything is so cheap. The food is delicious and costs practically nothing. My meals in the dining halls cost at most 15 RMB, which is a little more than 2 USD. My room and board is 750 RMB for the semester, which is a little more than 100 USD. To do a little math (since I am a math major), I’m here in China for roughly 5 months so let’s say 150 days. I don’t eat breakfast, so I eat two meals a day and let’s assume I spend 15RMB for each meal. That’s 30 RMB every day times the 150 days I am here so that is 4500 RMB. Now, let’s add in the 750 RMB room and board and that puts me at 5250 RMB. I have to add in an extra 100 RMB for showers, because they charge you for how long you shower. Though it’s a bit odd, I can’t complain since my housing is so cheap. 5350 RMB puts me at a little over 750 USD for the whole semester.

Meanwhile at Vassar, room and board (which may or may not include the meal plan; I am a little confused on where Vassar puts that charge) is 6450 USD. Aside from that, laundry only costs 4RMB per load (a little more than 50 cents) and I don’t have to pay for a drying machine because everyone in China hang dries. Thus, we have a balcony with pipes to hang our clothes on. While a minor inconvenience occasionally, we’re talking about how much money I’m saving so I’m just gonna ignore that part.

Sorry to nerd out for a little bit there, but that is what has been going through my head for the past month. In true math major fashion, I can’t help but constantly calculate how much things cost. Even when I go out, I am still floored by how cheap things are. My first meal after I arrived was at Burger King and I got a double decker spicy chicken sandwich with six nuggets, fries, and a drink for 25 RMB which is a little more than 3 USD. Sounds a little dumb, I’m sure, but airplanes really upset my stomach so I wanted something I knew I could handle. Plus, after visiting China a few times growing up, I know that the fast food is here is miles better than the counterparts in America. The Popeyes chicken sandwich sparked a debate this past month that would be solved if everyone could fly to China and have KFC’s spicy chicken sandwich. And I’ve tried the Popeyes sandwich. It’s good. So is Chick Fil A. But Chinese KFC has them both beat. Not only does it taste better, but it’s only 18 RMB which is like 2.50 USD.

Anyone who knows me knows how much I love bubble tea. Luckily, the rest of China also loves bubble tea. I was talking to my family friend who has lived in Beijing all her life and she was so surprised to hear that bubble tea is also really big in America. She thought it was just China. The bubble tea in China is not only cheaper, but also a lot better in my opinion. The tea flavor feels a lot more authentic. Nothing I’ve had so far has felt very powdery. It’s not over-sweetened to match American’s taste in food. I am someone who normally gets 0% sugar in America. But in China, I have adjusted to 50% sugar because it’s so much more bitter over here which is just the way I like it. A large cup at GongCha cost me about 16 RMB which is a little more than 2 USD. The American equivalent would easily run me 4.50 USD, maybe a little closer to 5 USD. There are so many more chains here, too! A lot of them are specific to China, so I have made a list of bubble tea places to try and review (shameless plug: check out @subtleboba on instagram if you wanna see).

The hardest part so far has been ordering. Restaurants aren’t the worst because a lot of them tend to have pictures. Though, I did go get Malaxiangguo (which is basically a bunch of meat and veggies stir fried together with Sichuan spices) and you can choose what you put in it, but it was just a list of the words and a checkbox next to it. I had to ask for help and they gave me an English menu for me. That felt a little humiliating. My dining halls are also manageable because I can just point to things and say “This one. That one.” Bubble tea is very hit or miss. Sometimes, there are English translations beneath them and then I can point to it and read half of the characters and hope they pick up on it. More often than not, however, I just have to guess. Hopefully, by the end of this semester I will have mastered ordering food. Until then, I will continue to happily eat whatever it is that I ordered.