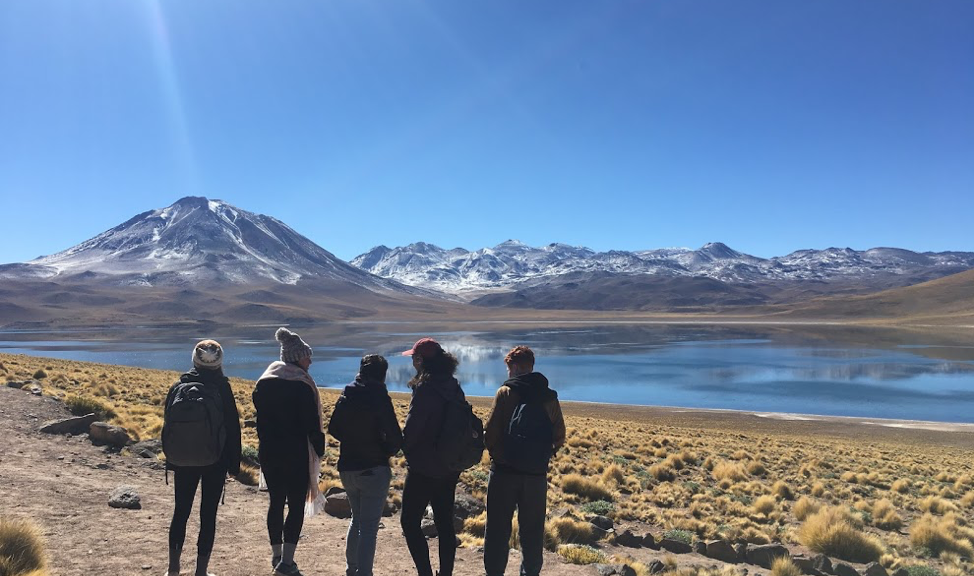 Featured image: Visiting the Lagunas altiplanicas in the Atacama desert

At the start of my time abroad, my host mom encouraged me to savor every moment, since it would fly by before I knew it. Despite Adriana’s 18 years of experience as a host mom, I don’t think I completely believed her, but as I write this final post from my bedroom in New York City I can see she had a point. My last month abroad was known as the “ISP Period,” meaning that instead of following a program set by my SIT professors, I created my own schedule for completing an independent study project that culminated in a 25 page paper and a 15 minute oral presentation, both in Spanish. Luckily, our program allowed us free days to travel during May, so before the inevitable stress of the ISP set in, my friends and I planned a trip to San Pedro de Atacama, a desert town in the north of Chile.

Traveling away from Santiago by ourselves was daunting at first, and it certainly required communication between the six of us. That being said, after two and half months of supervision from our program staff, it was refreshing to have the freedom to explore what interested us most. During our first tour to Valle de la Luna, our guide promised that the sunset would include every color we could possibly imagine, which was not an exaggeration. We quickly fell in love with the landscape, and were willing to wake up at ungodly hours to take in all that we could. On our most challenging day, we were ready at 4:30 am to visit the El Tatio Geysers at sunrise. Since we were going to travel 4,320 meters above sea level, I wore 7 shirts, 2 pairs of pants and 5 pairs of socks. I may have looked ridiculous and incredibly sweaty by the end of the day, but the early morning climate in the Atacama does not play around! Leaving the desert and returning to reality in Santiago was perhaps the biggest heartbreak of abroad, but luckily I have a few (hundred) photos of the Atacama, and some amazing memories, to get me through.

After our vacation, it was go-time for my ISP. My project centered on the “deuda histórica” (historic debt) that the Chilean state owes to teachers who lost employment benefits due to the municipalization and privatization of the education system during the military dictatorship. I focused specifically on how the Colegio de Profesores, the national teacher’s union, collaborates with the community of retired teachers who have been awaiting the repayment of the debt for nearly 40 years. To better understand the repercussions of the historic debt, I had the opportunity to interview retired teachers who protest outside of La Moneda, the presidential palace. The teachers use songs, signs, and chants to capture public attention, and have been protesting every Thursday for nearly 13 years. The passion and energy of the protest was extremely moving, as were the testimonies of teachers who lamented the destruction of public education during the dictatorship.

Transcribing 3 hours of interviews in Spanish was one of the more difficult things I’ve attempted in my academic career, and finishing my 25 page paper was a race to the finish, as anticipated. That being said, I walked away from the project with a better understanding of the demands of designing and conducting a research project, and greater knowledge of how the Chilean state has impacted the social identity of teachers throughout the years. After turning in our papers, we spent the last weekend of the program in Algarrobo, the same beach town where the program began. We started the weekend with our 15 minute oral presentations, which I have very little recollection of except for a feeling of immense panic, followed by a feeling of relief when I realized I had completed the entire academic portion of abroad! The presentation may have been terrifying, but fielding questions from my professors about the content of my research helped me realize how much my Spanish had improved from when I first arrived, and was struggling to explain even the most basic information in Spanish.

Being back in Algarrobo after 3 months was strange, thinking about how anxious I initially was to make friends and take on life in a new country. I appreciated the time we were given as a cohort to discuss the highlights and challenges of the program, and that my close friends and I reflected more informally about our expectations versus the reality of abroad. Although I’m glad to be home now, I don’t think I’ve entirely processed that I won’t be back in Chile tomorrow or even next week. At the moment, I’m feeling thankful to have learned in a new environment and pushed my limits as a student and as a person. Since I know I’ll be back someday, it’s only ¡Ciao for now, Chile!