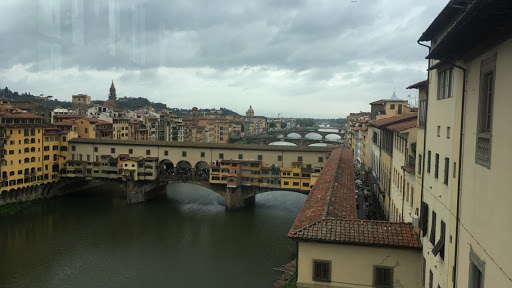 Featured image: Ponte Vecchio in Florence during one of the 10 seconds it was not raining.

Hello again and welcome back to Thao Does JYA. This week we’ll be covering parental visits and final exams.

It’s been quite a while since my last post and I’m just a mere 11 days from departure.

We’ll begin where I left off, I suppose. Just as I had settled into my routine it was over, or so it felt. I volunteered about ten hours total which felt like nothing. The class had barely gotten to know me, although they surely loved the hour-long break where we would play Simon Says and Seven Up. Six-year-olds seem to be the most competitive and the harshest critics, in retrospect.

In early April I visited Ravenna. Not to sound harsh, but it was not that riveting. The mosaics were gorgeous and cool but it’s just super small. Dante’s tomb (yes. The Dante. The Inferno Dante) was mosaiced, but also small, dimly lit and swarmed with other tourists. The churches are all architecturally intriguing but Ravenna has this problem, much like other coastal cities, where water is rising and the buildings are being compromised. I haven’t visited many places otherwise in these last few weeks.

The second week of April all my classes ended and my mom arrived. Being finished with classes was amazing, but being a tour guide seemed less thrilling. I realized there were not many touristy things to do in Bologna and though that makes it a great atmosphere for studying, it’s not particularly amazing for a ten-day stay. As a result, we went to Padova and Florence for day trips. Don’t get me wrong, I loved every second my mom was here. Staying in a nicer accommodation was amazing and the food we enjoyed together was magnificent, but I am not cut out to be a tour guide.

In Padova we went to see the lovely Botanical Garden but there was not a ton of other things to do. It poured rain when we were in Florence so we got to the Uffizi Gallery where we waited in line for two hours to enter and did little else. The two week-break I had for Easter (a hugely popular holiday here in Italy) flew by, as did my time with my mom. And, in all honesty, sitting in the park and enjoying the sun were my favorite moments.

After my mom left I entered studying mode immediately. I had been out of classes for about two weeks, and, unlike at Vassar, there is usually a large block of time between classes ending and exams. A month to study may seem great, but having the rigidity to actually maintain some sort of order in studying is… not so doable. As an American student, I feel so spoon-fed now. Lectures here do contain material, but the vast majority of things are self-taught. My internal classes had discussions occasionally, but my class at the actual university was very lecture-based. There were no in-class discussions or assignments to gauge our understandings or correct and improve.

This past week I had my three exams and now I’m freeeeeeeeeeee! Sort of. Two of my exams were oral and the other was multiple choice, but the grading system here is a bit… odd. Everything is out of thirty. The professors I had graded me on the spot. My first two exams were just answering questions, some of which seemed unrelated to the course, but they were fine. I sat at the desk in my professor’s small, dim office and took my exam as she used her cell phone and laptop. She was super sweet and kind and she offered me a dictionary and to translate the questions, but I decided it was best to wing it. In 12 questions and 20 minutes my entire grade for that course was decided. While it may not be the best system, I guess it’s not the worst.

Besides all this, I’ve just been trying to spend my time in a more relaxing way. Two weekends ago I went to San Luca, a church located in the hills overlooking Bologna, and had a small picnic with friends. Today I went to FICO Eataly World, which was super duper touristy yet lovely meal out with friends. I’m happy to have time for myself, not that I haven’t this whole time.

Now I wait. I’m not in a rush to leave, but I’m also not driven to stay. Since the academic part of my semester abroad is officially over, I feel sort of purposeless here, solely a tourist with nothing to tour anymore. Although that’s not necessarily true, as there are tons of things I haven’t done or seen, I feel sort of stagnant in my place in Bologna now. I know the city well enough that I’m not super curious anymore, yet I also don’t feel at home here. My dorm is… just a dorm. It never truly felt like a homie safe space like the Hudson Valley did, but perhaps I’m judging too harshly.