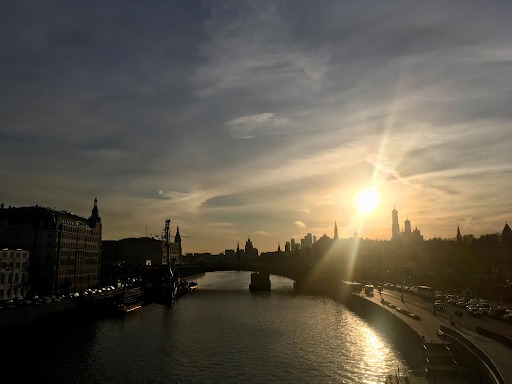 Featured image: View of the Moscow skyline from the lookout point at Zaryadye Park.

Vsem privet! (Hi everyone!) Spring is in full bloom here in Moscow (and I’ve got the hay fever to show for it). Just a few weeks ago I still had to bundle up in a coat, scarf, and boots, and now I’m in dresses, skirts, and shorts. The weather here can be unpredictable—a bit like Poughkeepsie weather—since it can jump from under 50℉ up to 75℉ n a day.

With the sun shining and plants and trees blossoming everywhere, I’ve been able to explore and appreciate the expansive beauty of Moscow without the cold slowing me down. The maiskiye prazdniki (May holidays) have just arrived, so everyone has a few days off from school and work to celebrate the arrival of spring. This marks the time of year when a lot of Russians start going to their dachas (summer homes) or stay in the countryside to zharit’ shashliki (grill shish kebabs), maybe go fishing, and just relax and get some fresh air outside of the city.

When you’re in the city, though, one of the best ways to spend time is going on a progul’ka, or a nice stroll outside. Every time I’ve gone to the city center since the beginning of spring, I’ve seen hundreds of families, couples, and groups of friends milling about, laughing and enjoying the newfound warmth. It’s a cultural tradition here.

There are a few other popular ways to make the most of your dosug’ (free time away from work or school) that don’t cost a lot. First, the theatre here attracts people of all ages and from all walks of life—plays, musicals, and the ballet are all high quality and cost way less than in the U.S. My friends and I went to the world-renowned Bolshoi Theatre to see Sleeping Beauty, and our student tickets were around $1.50 each (that’s not a typo). Also, it’s always fun to visit museums and check out historical attractions, many of which function as nice places where you can stroll around outside, since you can spend however long you want learning about a period of Russian history, art, or literature. Just recently, one of my friends from Germany and I went to the Palace of Tsar Aleksey Mikhailovich, a huge, wooden structure that served as the Romanovs’ summer residence, and spent hours afterwards walking around the giant park that surrounds it.

In general, living in Moscow as a university student has really helped me to understand Russia on both a smaller and a larger scale. We Americans often like to think of ourselves as extremely different from Russians, perhaps even as polar opposites. A common topic in many of my classes here is “differences in character (personal and national)” between Russia and any other country. Most students and professors I know agree that trademark American values include personal achievement, independence, and egalitarianism. I can think of a couple of examples to support this:

It may seem trite to say so, but I think that Americans and Russians aren’t so terrifyingly different. A literary trope that still exists to this day is the “zagadochnaya russkaya dusha”, or “the mysterious Russian soul,” which is ostensibly unknowable to foreigners. This stereotype has some value when describing the closed-off exterior many people may encounter when getting to know Russians; but on a deeper level, it unintentionally writes Russians off as too brooding and complex to bother trying to understand. My experience here with my relatives, friends, and professors has taught me the opposite. Russians value their family, education, stability, respect, and making honorable choices in life. Sound familiar? In reality, they are curious, happy to share and explain their culture with you, and often open-minded.

Anyway, all of my sociocultural analysis aside, I’m having a hard time grasping the fact that I’m leaving in a little more than three weeks! I feel comfortable and happy here, and I’ve been loving the freedom I have to explore this huge megalopolis. I’ve been learning a lot from my classes and my friends, and I’m not quite ready to go back just yet.

See you next time! Poka!