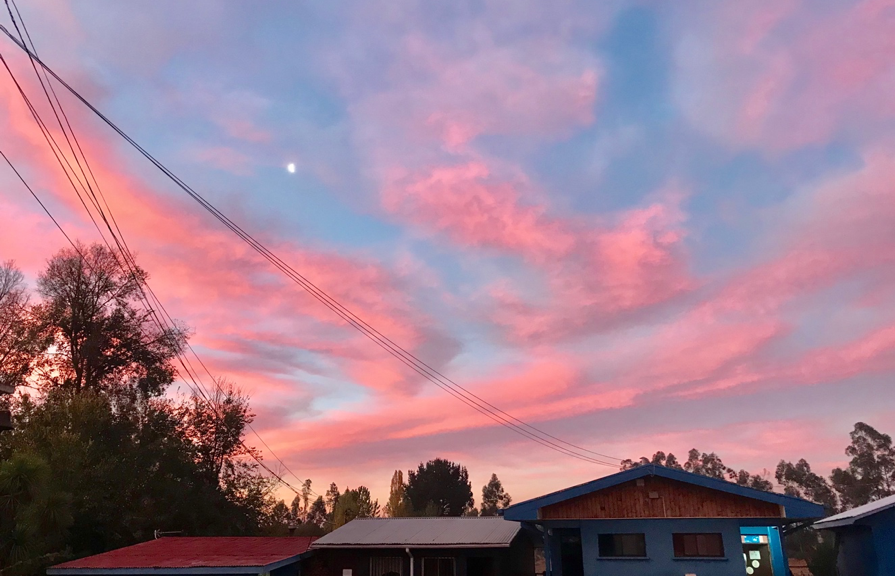 Throughout the past month I’ve thought to myself countless times, “Where am I… and how did I get here!?” I often think this when I fall asleep during bus rides and wake up in another dimension, but also at random moments when I pause to reflect on the unique experiences I’m having. This was especially true during the first week of April when we traveled to Temuco, located south of Santiago in the Araucanía Region of Chile. After an hour-long flight we were in a completely rural setting, with rolling hills, farms, and vacas (cows) around every bend! Our excursion was to study how the Mapuche, an indigenous community located in south-central Chile, interact with the education system, especially considering the ongoing violence of the Chilean state towards the Mapuche people. During the week-long trip, we were hosted by families from Escuela Ñirrimapu in Padre Las Casas, where a significant portion of the student body is Mapuche.

One of my favorite aspects of the rural homestay was living in a bigger family, which included my host mom, host dad, host brother, host sister, host grandma, and even host cousins for one afternoon! The family ensured that there was never a shortage of conversation or of sopaipillas, a type of fried bread that I consumed about 5 pounds of during my stay. Getting to know my host siblings was exciting for me since I’m an only child, and it was also valuable in thinking about how children form cultural identity based on their experiences at school. My host family moved from Santiago to Padre Las Casas five months ago, and my host brother mentioned that his school in Santiago did not discuss Mapuche culture. At Escuela Ñirrimapu, however, he’s had the opportunity to learn traditional Mapuche games and dances, as well as take classes in Mapudungun, the native language of the Mapuche people.

As I learned more about Mapuche culture, I was also hyper-aware of the presence of western culture in the house, as we played Connect Four, sang our favorite songs from Moana, and watched American movies dubbed in Spanish. Although my host brother loved to practice counting in Mapudungun, his parents would typically encourage him to practice English when I was around, since Escuela Ñirrimapu also offers English language courses. Recently, the Ministry of Education in Chile has adopted a policy that requires schools to provide an indigenous language course if 20% or more of the student body has indigenous heritage. This is certainly a step in the right direction, but it was nonetheless concerning to hear that my host brother couldn’t learn Mapudungun in Santiago since in his words, “there were no Mapuche.” Meanwhile, most schools we’ve visited in Santiago offer coursework in English, which made me think about the role of western dominance in the devaluation of indigenous culture. At the end of our week in Temuco, although I was ready for the independence that comes with living in a city, I simultaneously wanted more time to share with my host family, who I am grateful to have met and learned from.

After a quick five-day stay in Santiago to give presentations and turn in essays, we were off to Buenos Aires for two weeks. We left for the airport at 2:30 am, so I arrived in Argentina a shell of my former self. Even after (sort of) recovering from that brutal day of travel, my friends and I have found it hard to keep up the excitement we had at the start of the program. Coming to Buenos Aires meant once again adjusting to a new homestay and a new transportation system that, as I expected, is a challenge and a half to navigate. The architecture and scope of Buenos Aires also reminds me of New York City, so I’ve been slightly more homesick than usual. I feel very lucky to have loving and supportive friends in my program, who remind me that it’s normal to have bad days, even with the expectation that we should be “living it up” abroad.

All that being said, it’s been fascinating to learn about Argentina’s political history, and how the legacy of the military dictatorship compares with that of Chile. One of our most impactful excursions was visiting the march of the Madres de Plaza de Mayo, who began marching in 1977 to demand the return of “desaparecidos,” their children who “disappeared” as a result of state terrorism. The Madres march around Plaza de Mayo every Thursday, and their white scarves have come to symbolize the fight for civil rights in Argentina. During our visits to high schools in Argentina, students have commented that they learn extensively about the human rights violations that occurred during the dictatorship, which has helped me think about the role of schools, and of the state, in the construction of historical memory.

April was non-stop, but May is almost completely unstructured and dedicated to us working on our Independent Study Projects. I’m researching how the Colegio de Profesores de Chile fights to restore teachers’ rights that were lost during the dictatorship, which means lots of interviews in Spanish. I haven’t conducted my own research before, let alone in Spanish, so as my friends and I say almost every day, ¡Vamos a ver! (We’ll see!)