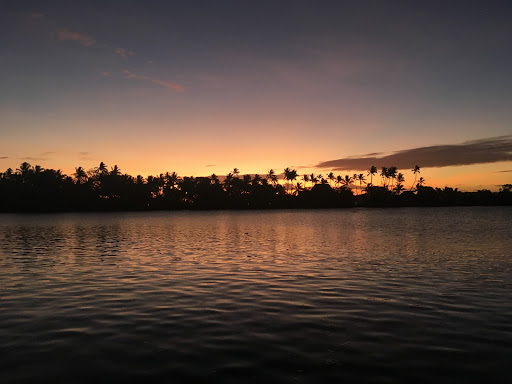 Featured image: Sunset at Rukurukulevu, a village we had dinner at during our first night in Fiji.

Currently, I am heading into the last two weeks of my program. However, instead of worrying about the 30-page research paper I should be writing, I’d like to take y’all on a trip down memory lane and talk about my program’s excursion to Fiji!

Early in the morning on the last Saturday of February, we boarded a plane and set off for Nadi, a city on the western side of Fiji’s largest island, Viti Levu.

Our first stop upon arrival was Nadi Temple, the largest Hindu temple in the country. Fiji is home a large Indian population, who are descendants of the indentured servants brought over in the 1880s to work on plantations. These Indians stayed and became Indo-Fijians, the second largest ethnic group in the country. Most are Hindu and have places of worship all around the country.

Before entering the temple, we had to cover our legs with multi-colored cloth given to us by the staff. Also, no pictures could be taken inside the temple. At first, we were given a tour, with our guide explaining the different depictions of the gods and what each of the shrines was. After that we had time to individually explore, wandering around the grounds while also trying to be respectful of the worshipers. I was mostly in awe of the art that decorated the ceilings. Each panel was painted with an elaborate scene that told one origin story or another. It was the only thing I wished I could take a picture of but instead of I attempted to commit the designs to memory.

After the temple, we checked into Geckos Resort, where we chilled out for the rest of the afternoon. At dinnertime, we arrived in the lobby strapped into our purple puletasi, ready to head over to the village that was next door. Rukurukulevu was home to my academic director’s husband and the place where we would be staying for dinner. It would be our first introduction to Indigenous Fijian customs and culture.

The procession into the village was slow and steady as we nervously walked past people’s homes, with the only guy in program, Ariel, leading the charge. Children ran up to us and shouted, “Bula!” and since that was the only Fijian word we knew, we repeated it back. Adults greeted us similarly albeit less enthusiastically, waving at us from their homes. “Bula!” has become not only one of my favorite greetings but also one of my favorite words ever. Its meaning extends beyond hello and originally translates to life. The entire greeting, Ni sa bula vinaka, translates to “wishing you happiness and good health” which is similar to Malo le soifua, a common Samoan greeting.

Finally, we were greeted by the village council at their common house. We sat in a semicircle facing the elders with our legs tucked to the side (which, let me tell you, was definitely not the best position to sit in for several hours…) and our eyes averted downward. The one boy in our group, Ariel, had the privilege of sitting in the center, as he was our “chief,” or liaison. He was the one who got to present our gift, the root of the pepper plant that is used to make yaqona or kava (ava in Samoan). After enduring multiple speeches that were entirely in Fijian, we finally got to have our first sip of Fijian kava.

I’d been having a lot of kava since I’d arrived in the South Pacific. In fact, my second day in Samoa had me downing a bowl. I’d hated it then and described it as drinking gravel. But what’s the point of being in Fiji if you don’t acquire a taste for kava? While Samoans mostly drink ava as a ceremonial thing, for Fijians it is their daily bread. After long days at work, the men will sit around, mixing and drinking it until they are happy and drunk. But the thing is that you don’t really get drunk from kava per se. At the very least it’ll make your tongue numb and relax you. Some hardcore drinkers, however, will consume until they’re high and delirious but that’s an effect I’ve never had.

The kava was mixed in a large wooden tanoa bowl and poured out on to thin coconut shells. To receive the drink, we would clap once and then say “Bula!” once it was in our hands. Then after drinking, we would clap three times. We sat around drinking kava, conversing with villagers and playing with their children until it was time to go. We stumbled out of the village at 11 pm, ready to go to bed but sad to leave our new friends behind.

The next day we packed our stuff and got ready to head out to Suva, the capital city that was about 3 hours away. First, we stopped at Sigatoka, for what we thought was going to be a casual look at the sand dunes. Instead, we got roped into what was the most exciting yet exhausting two-hour hike of my life.  We walked through the Driodrio Forest, which is believed to a gateway to the spirit world. A falling star seen above this forest at night foretold the death of someone in the nearby village. Then we got to the actual sand dunes which acted as a barrier, protecting the village from the neighboring ocean. We walked up and down the sand dunes and at one point discovered ancient pottery that had previously been buried. These sand dunes are a relatively recent formation and covered the remains of the previous civilization. It is also thought to be the site where the first Fijians landed.  Eventually, we reached the beach that was littered with driftwood and picked up walking sticks to make the last part bearable. In the end, we were all ridiculously sweaty but had had lots of fun.

Finally, we arrived in Suva, a booming metropolis compared to our current home of Apia, Samoa. We stayed at a hostel owned by the Anglican church, also functioning as a seminary school, and our classes were held on the same compound.

On Monday we visited another village, Korova, that specialized in making tapa or barkcloth. We watched the women cut off the bark, beat it, and paint it with elaborate designs, and we helped out when we could. This village and its people were some of the primary informants forMoana. After they made the film, Disney awarded them money to make their own Polynesian sailing canoe.

On Wednesday, we spent the whole day at Silana, a village whose people believe that they are descendants of dolphins. After riding in the back of a truck for two hours, we reached the base of a mountain, where the village resided. Another kava ceremony was performed but this time only Ariel got to drink. Then we got onto boats and sailed out with our captains calling the dolphins to us with conch shells. We swam in the reef for a while before heading back to eat lunch and drink more kava.

The rest of the week was a chaotic blur as we juggled school in the morning and excursions in the afternoons. Some highlights include watching my first Bollywood movie in theaters, visiting the Fiji Museum, exploring the flea and handicraft market, and watching the sunset over the ocean every day.

All in all, Fiji is definitely one of the best places I’ve ever visited, and I didn’t even do the cool stuff like island hopping. I can’t wait to go back and say “Bula!” every day.