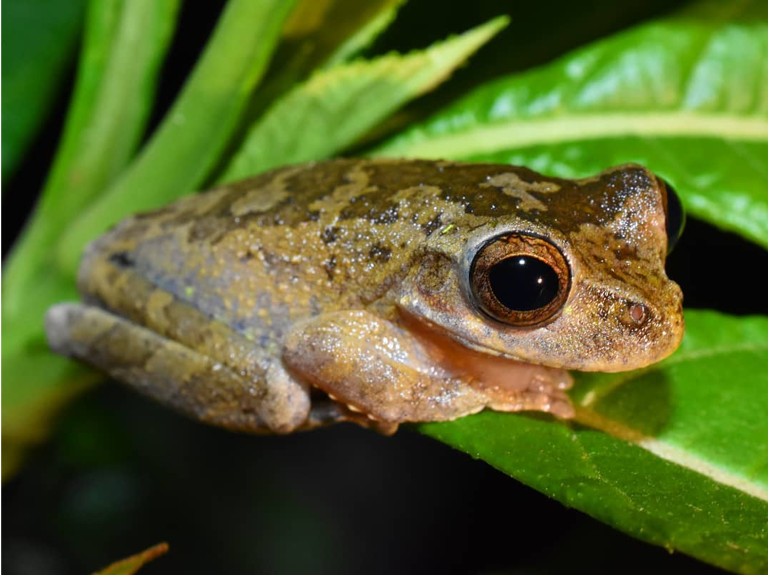 Featured image: A Panama cross-branded tree frog we found while frogging in a creek on our very last night of group field work in El Valle.

Last night at about 10:30 we finished our final field work as a group for the whole semester! It’s surprising how quickly the time has gone, especially in the last few weeks. Since our last stay in Panama City, where we finished up our Spanish classes, we have been out traveling the country again, this time packing nearly every day with intense tropical ecology classes. The first excursion out into the country featured tropical ecology as well, but the two subjects at that point were forest ecology—which we studied while in Barrigón, the location of my first post—and mangroves and seagrass in Bocas del Toro on the island of Colón, both plant-based. This second excursion, however, featured tropical ecology classes that fit a lot more closely with my personal academic interests—animals!

The first stop was to study corals while living on the tiniest island I’ve ever been on in the indigenous autonomous region, or comarca, of Guna Yala. Corals was by far the most difficult unit of tropical ecology. Not only was the field work laborious, but our professor insisted on lecturing long into the night after five or six hours of fighting against waves and snorkeling through coral reefs, and then giving us a grueling final test and grilling us intensely on our final presentations. But the experience was something I wouldn’t want to miss if I had the chance to do it over. Corals are immensely complicated and fascinating animals, and getting to explore a reef freely and find all of the beautiful vibrant fish, worms, sponges, and crustaceans that inhabit the innumerable nooks and crannies of the habitat made the hard test worth it. Not only that, but we got the chance to talk to some of the local Guna people, and learn about the mindbogglingly complex problem of protecting marine ecosystems without hurting local livelihoods.

Next is where it got even more fun for me—birds! The birds unit took place in Gamboa, a small town in the canal zone famous for its birding tourism, and overflowing with elderly white tourists with absurdly expensive cameras and lenses. The field work for birds was amazing. We set up mist nets in the forest behind our hostel, and woke up early every morning to open them, wait an hour, and then check them to see what we caught. The diversity of birds in Panama alone, a country about the size of South Carolina, is greater than that of the US and Canada combined, so the excitement of finding a new species of bird with every net check was thrilling. With each bird, which ranged from the bright and hefty motmot family, to a few tiny and iridescent hummingbirds, we took a huge range of measurements and qualitative evaluations of their health before releasing them unharmed back into the forest. I got to hold a few birds and think to myself as I held them that I was holding a dinosaur, which was pretty awesome.

Next, we travelled back into the countryside to an eco-resort where we studied mammals, and finally got a chance to look at the results of our camera traps that we set up in the rainforest in February. I kept my expectations low, as camera traps can turn out to be disappointing, but what we got was incredible! In addition to animals I never thought I’d see in the wild like white-faced capuchins, peccaries, tapirs, and a crazy looking crested bird called a great curassow, we got more than expected of what our primary objective was—big cats. Not only did we get good pictures and videos of margays, ocelots, oncillas, and jaguars (the native big cat to the region), but we also caught something incredibly rare which our professor, who works for the leading worldwide NGO for big cat conservation, told us had never been seen in that region before—a black jaguar. Black jaguars are the same species as typical-looking yellow jaguars, and only make up about 6% of the population, so we were very lucky to have caught one.

Finally, here in El Valle de Antón, we are just about to finish our amphibians unit. If you’ve read The Sixth Extinction by Elizabeth Kolbert, a fantastic book detailing the mass extinction event that humanity is currently causing, then you may remember that the first chapter described the plight of the Panamanian Golden Frog, a national symbol of Panama and especially of El Valle, this town built in the crater of an ancient volcano. The past few days, we have been living that chapter. Our class here is taught by Edgardo Griffith.

Along with his wife Heidi Ross, Edgardo has saved the golden frog from complete extinction by creating his very own conservation center from scratch, with no help from the government until very recently. When I read that chapter of the book, I had no idea that in just a few years I would be meeting the man that was featured so heavily; even less, that I would get the chance to hold one of the golden frogs! It may not sound like a huge deal, but amphibians are going extinct faster than any other group of vertebrate animals, mainly due to an invasive and incredibly dangerous fungus that has swept through the Americas and decimated (literally) frog and salamander populations. Without the work of Edgardo and Heidi, the number of frogs that have gone extinct in that past few decades would be a lot higher than it is right now, which is still pretty high.

Finally, I’ll quickly explain what comes next. In just a week, I will start my independent study project, during which I will be measuring and comparing the frequency of great-tailed grackle calls in the high traffic of Panama City and the low traffic of Gamboa. I’m hoping to find a significant difference in pitch, as other urban bird studies have, to demonstrate that part of the reason the grackles are so successful at city-living is that they adapt their communication to compete with the unnatural sounds of city traffic.