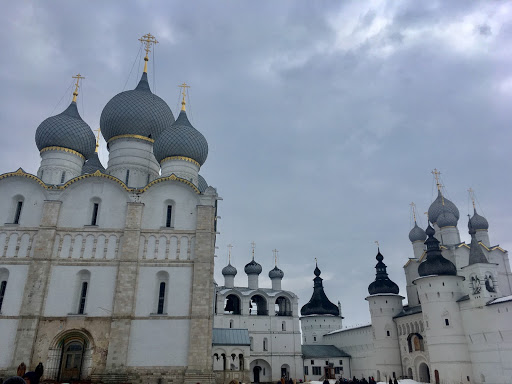 Featured image: Part of the Rostov Kremlin in Veliky Rostov, where I traveled to a few weeks ago.

Stage two of my study abroad journey: welcome to culture shock! From everything I’ve read about the stages of study abroad, I can tell I’ve reached the point (which occurs around a month in) where the rose-colored glasses have slid down my nose, and I’m starting to notice cultural differences about Russia that I hadn’t until now.

Learning a foreign language is a bit like riding a rollercoaster with its ups and downs, but there are also plateaus where you can’t tell if you’re moving forward. The difference between expectations and reality means that while I can understand almost everything being said, it still takes time for me to express myself on the level that I can in English. Although I can speak freely in class and in conversations, the fact of the matter is that I don’t know every single expression naizust’ (by heart), I sometimes use the wrong prefix attached to a motion verb, and sometimes I just… uh… what I’m really trying to say is… you know? I’m at that stage of language accumulation—a necessary plateau. Trying to close the gap and reach native-level fluency has frustrated me, but we’ll see how I feel in two months.

Beyond the melochi (the small stuff) that have bothered me here (long lines for laundry and food; hot, old buildings like the ones at Vassar) I wanted to talk about a few interesting cultural differences that I’ve noticed during my time here.

First, the quintessential American brand of extreme politeness (smiling, small talk, warmth and receptiveness) is not commonplace here. This is true for a lot of European countries, but the lack of it is noticeable here. Cashiers at the grocery store don’t smile and ask if you found everything okay, waiters don’t usually stop to chat with you, and people definitely don’t say “excuse me” when they bump by you in public. When I was home in the U.S. over winter break, I actually had to remind myself to say “sorry” and “excuse me!”

Second, personal space and boundaries are smaller here. Russians stand closer to each other, aren’t afraid to touch you (on the arm, shoulder, etc), and will move past you. On the same note, Russians will often maintain really strong eye contact without blinking or looking away, to the point where you start thinking “Is there something on my face? Oh God, there’s definitely something wedged in my teeth.” Also, PDA (public displays of affection) is definitely more popular here than in the US. Whereas Americans tend to frown upon couples making out or squeezing each other in an embrace in public, here it’s more accepted.

Finally, gender norms are much more pronounced here. The roles for women and men are strictly defined here in the sense that the concepts of zhenstvennost’ (femininity) and muzhestvennost’ (masculinity) dictate appearance, behavior, and the “separate spheres” that women and men function in. As an American girl and self-identified feminist, it’s been eye-opening to learn more about the expectations for girls and women in Russia. Society’s admiration of krasota (beauty) makes it seemingly the most important attribute a girl can have, which goes hand-in-hand with nezhnost’ (tenderness or sweetness), the mysterious power that women possess to comfort and improve the lives of their loved ones.

Mass media and advertisements here communicate and propagate these concepts, but they reflect the enduring, deep value they have in Russian society. When it comes to dating and marriage, the roles for men and women are more often than not quite traditional: the man proves he’s strong and chivalrous, and the woman shows that she’s caring and affectionate. Having created a family, the woman takes care of her husband and the children’s needs, “creates the atmosphere” (of coziness or comfort–I’ve heard this phrase countless times in Russian and still don’t really get how or why this is a woman’s job), and ensures that everyone is content. Careers and ambition are second to family, which is happiness itself.

Of course, not every single person subscribes to this philosophy in Russia; there’s a countercurrent of people who don’t agree. More and more young people believe that women can pursue whatever they want whenever they want, and that men and women should have equal status in a relationship or marriage. Compared to the surge of Russian women in the workforce during and after World War II, where many women started or continued working outside the home, it’s interesting to see how the expectations have evolved. As an aside, the word “feminist” still has something of negative connotation here. One time, while discussing the differences between our respective countries, I had a language professor of mine make a remark along the lines of “all the extreme feminists live in the U.S.” While that’s not exactly true, what is true is that the word is more accepted and popularized in America. Personally, I believe that a woman should be able to choose to work or stay home without criticism, but also without pressure from society to make the “right” choice.

By exploring all of these cultural differences, I’m aiming to paint a picture of what makes Russia unique from America, not to say that one country is better than the other. As they say, people have one thing in common: they’re all different. I’m glad that my time in Moscow, combined with my time in Saint Petersburg, has made me able to understand Russia better than I ever could before. This firsthand experience has definitely broadened my concept of what Russia is in 2019.

But do I really only have two months left here? The weather is getting warmer and warmer (the high this week is a cool 56 degrees), so hopefully I’ll have more photos of spring in Moscow for you guys!

See you next time! Poka!