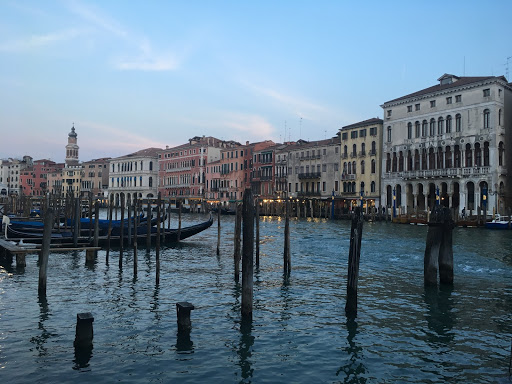 It’s hard to imagine that I’ve been here in Italy for over two months now and have just under two months left. It’s not that I’m particularly apt at staying here or particularly attached to going home. There’s just a vague sense of comfort to finding a routine, but here, I’ve found, my routine is very easily disrupted.

In late February, my boyfriend found his way across the Atlantic and stayed in Bologna for a week. Our day trips to Verona and Padova were lovely, but a week was hardly enough time for him to adjust to the time difference. While his presence was absolutely amazing and a total comfort, it did remind me that being so far from home has been something to get used to. Communicating with anyone seems so arduous; the internet here is often horrendous and the six-hour time difference is still such an impediment. Yeah, the food is great and there are pretty things but… dare I say… it’s not that different from home. Except the much more overt racism, as mentioned in a previous post.

Despite my qualms with Italy, I’ve done my best to see its abundant vistas. March was a heavy traveling month. As a low-income student, my pockets are very… shallow. Unbeknownst to me, study-abroad is often an excuse to travel all of Europe, jet-setting every weekend to a faraway place for the Gram. My roommates expected this kind of experience, and they are unfortunately still shocked by the amount of weekends I spend in Bologna, often drearily fulfilling my chore responsibilities or reaching my peak at local farmers’ markets. Fortunately, my program enables me to experience Italy through its built-in trips: several day trips and one 3-day weekend in Venice.

Verona and Padova were charming and lovely small cities (perhaps their charm was amplified by Bryan’s presence). Verona, arguably my favorite city I’ve visited, houses a small roman amphitheater as well as a lovely garden called Giardino Giusti. The garden is terraced, and there’s a lower area with the notable cypresses and hedges as well as a tower and upper garden that offers an amazing panorama of the city.

Venice was unique and worthwhile even though it was ridiculously overpriced. As someone who gets boatsick, using Venetian public transit ferries was definitely rough. But I did get to travel to the smaller islands of Burano and Murano. Burano is a brightly colored haven where lace-makers have worked for centuries, passing the skill down from generation to generation. Murano is the glassmaking island where the famous venetian glass comes from. Within my travels, art museums seem to be unavoidable, as the Guggenheim and Ca’ Pesaro were stops on my Venetian adventure.

I also traveled to Rome with a friend. We hit all the major tourist sites, from the Vatican to the Colosseum and Roman Forum. Palatine Hill, a serene, bucolic pause from the chaotic tourist traps below, was my favorite site. The bergamot trees were fragrant, and the wisteria wilted ever so gracefully along the fountains and pristine white pillars. The Colosseum and Roman Forum were right in the background, creating yet another gorgeous panorama. Villa Borghese was a close second favorite. The large park was filled with neoclassical buildings and lovely art. The food in Rome was average, but I guess I am coming from the city known as “IL GRASSO” (the fat). I will say that vegan spaghetti carbonara is doable. It was done. Just saying.

While Rome was gorgeous, racial tensions ran high. Anti-immigration propaganda and very visible mistreatment of immigrants of color were ample during the three-day excursion. The culmination of my racialized experiences was being turned away from an empty trattoria—an informal restaurant—in favor of two white males who had walked in after us. After asking what we wanted rather rudely, the hostess simply said they couldn’t serve us. Shocked, my friend and I walked away while the two men after us asked for a table for two and were greeted hospitably. This restaurant, definitely not a place where reservations were needed, blatantly turned us away in an event which only seemed motivated by the fact that both my friend and I are POCs. While racism has not ruined my experience in Italy, just because I have not let it, it definitely is a tolling truth of my everyday life here. While the US still has tons to work on in regards to racism, my experiences there cannot compare to those I’ve had here.

My daily routine seems quite laughable as I write about it. Walking to and from classes and errands takes at least an hour a day. Aside from my 17 hours of classes per week I’ve begun volunteering. On Wednesday afternoons I volunteer at a local primary school teaching english to first-graders. Volunteering has been an experience in itself; the first-graders here are still learning the alphabet and numbers and so my lessons have predominantly revolved around animals. I love working with children, as I always have, but the language barriers with six-year-olds seems even harder to deal with than it is with adults. Even the game of Simon Says becomes this horrific jumble of Italanglish that riles the kids up.

Besides the wee ones, I have so little else occupying my day. I explore Bologna a lot, but all in all I still have academics and the usual Vassar worries. Stay tuned for next time!