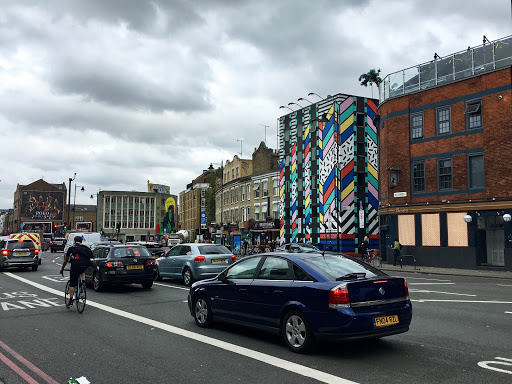 Featured image: Old Street, where I take the underground to UCL.

I’m starting to get to the point in my year abroad when I’m realizing just how little time I have left in London. I’m doing my best to not let my brain—which loves doing this—start any sort of official internal countdown. But a nagging thought does surface unbidden every now and then: Enjoy it while it lasts, you don’t have much longer here.

Judging by my last few posts, it may seem like I spend all my time traveling and am hardly ever in London. That’s actually not true. While it’s important to me to fit in a decent amount of trips during my time here, a big part of the reason I chose to go abroad for a full year rather than just one semester was so that I would have the time to balance my desire to travel with the impulse to soak up every bit of London that I can. I am going to be spending the next month on a spring break backpacking trip through Europe, but with the exception of a quick jaunt to the Scottish Highlands in May, that’ll be my last big excursion of the year. I ended up deciding to shelve (for now) a few journeys I’d tentatively planned for after spring break, so that I can just be here for my last two months.

It’s often easier to write about other places I visit because many of my experiences in London are quieter, more ordinary. Aside from museums, I don’t go to tourist destinations here, having visited most of those on my first UK trip when I was seven. The majority of my time is spent in regular, down-to-earth, sometimes gritty London neighborhoods that aren’t featured in the movies that Americans watch—which is to say, not Notting Hill, or Baker Street, or anywhere remotely in the vicinity of Buckingham Palace. This city has become a second home to me in the six months that I’ve lived here, and I often find it harder to articulate my complicated feelings about “home” than the easy excitement of some new destination.

My year abroad, so far, has not been as romantic or action-packed as I thought it might be, all the years I dreamt of this. There haven’t been wild nights out, or torrid flings—though I suppose with three months left, you never know. I think what I’ll remember most about my time in London are the hundreds of hours I’ve spent walking through this chaotic, maddening, vibrant city, usually without a destination in mind. With a few exceptions, mostly featuring my parents when they were here visiting, I’m alone in these moments. I haven’t formed any lasting friendships here, and yes, it can be lonely, but I’m mostly okay with that. I’m used to it. Solitude has been my default state for most of my life, and at this point, I often prefer my own company to that of other people, aside from family and a few close friends.

As I walk, I do my best to soak in the sights, sounds, and even smells around me: the wild colors of the prodigious street art in the East End, so vivid against London’s near-constant steel gray sky. The enticing aromas of the chippies, curry houses, and kebab shops. The cacophony of languages and accents spoken by the locals—from the cockney banter of the old-school Hackney fishmongers and produce merchants, to slightly more posh tones a few blocks away in Islington, to the swirl of Jamaican Patois and Hindi and Turkish and West African French and probably dozens of other languages spoken at the local markets. I find it fascinating how the signs outside money transfer services illuminate the different immigrant populations of each neighborhood: Send cash to Guyana! To Nigeria! To Gambia! To Bangladesh!

On these treks, I also imagine a more permanent life here. There’s the weathered Victorian rowhouse in North London where I could have a little attic studio flat, somewhere to read and write while I listen to the ever-present rain pounding on the roof. There’s the Tube line that I’ll take to my job (in this daydream) at the BBC or The Guardian or The New York Times London bureau. There’s the cozy neighborhood bookshop or café where I get the feeling I’ll meet someone who will become important to me, a best friend or a boyfriend, or maybe both. There’s the park where I could go for long runs on the weekend.

I know—especially since I’m pursuing a career in journalism, which London is one of the best cities in the world for—that this imagined life is entirely within the realm of possibility. But that’s what my mom thought, too, when she was my age. Growing up in a boring California suburb, she always dreamed of moving to London (clearly, she passed that love on to me, as my dad has also done with his affinity for New York City). She spent her first two years of college here, but for a number of reasons, she had to return to the United States to finish her degree. She was set on coming back to London soon, but during one college summer, she met my dad when they were both working at a record store in San Francisco. She only meant for it to be a summer fling, but in a few months, they’ll be celebrating their twenty-fifth year of marriage, and thirtieth year as a couple. With a serious boyfriend, then a career, then a husband, then my brother and me, it was suddenly a lot harder to pick up and move halfway around the world. Life just got in the way. While my mom is happy with her life and family, London is always going to be her biggest “What if?” I’m worried that life may get in the way of my desire to come back, too.

Of course, returning to London is far from the only thing I want to do in my life, or even in the next ten years. After I graduate, I’m planning to spend a year or two vagabonding around Asia, Africa, and Central and South America, hopefully doing some freelance international reporting. New York City—and my birthplace of Brooklyn, in particular—has much the same pull on me as London, and I need to spend at least a few years there. I would also love to live somewhere really different from the US and the UK, like Mumbai or Saigon or Nairobi (or maybe a year in all of those places). No matter how far I travel or how long I’m away, my hometown of Oakland, California will always have a hold on me, and I know I’ll go back someday.

I really don’t know what’s in store for me or where my life after college will take me. But I do know that I need London to be a part of that life, in some way, at some point.