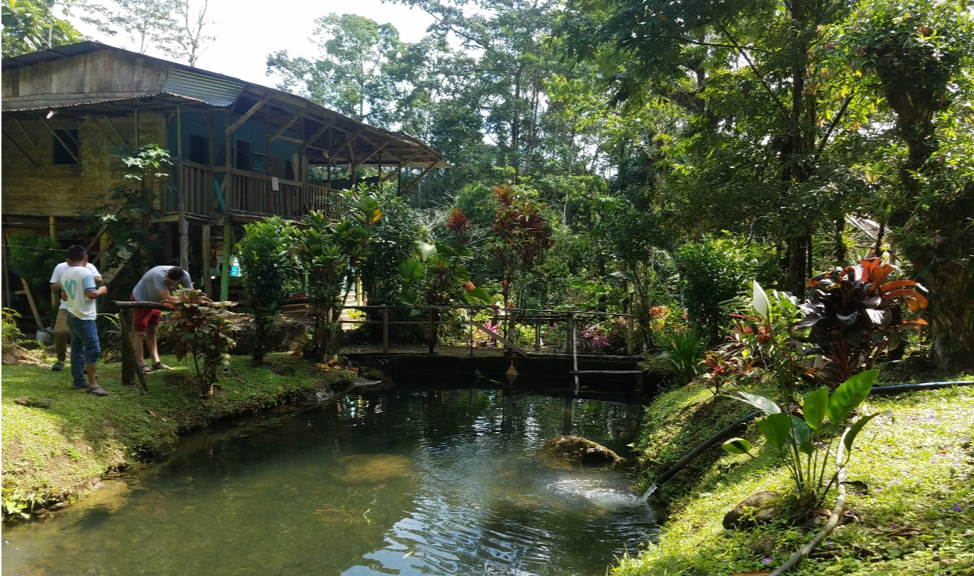 Featured image: The tilapia pond and the finca.

I’m sitting on a mossy rock in Costa Rica on the shore of my host father’s tilapia pond. Eli, another SIT student, and Eduardo, a member of the indigenous Ngobe people, are both fishing for our lunch with worms we dug from the earth and fishing line with no poles. Right now we’re in La Argentina, Costa Rica, and our group is split up amongst a few of the subsistence farms, or “fincas,” that make up most of this community. We sleep in a lofted wooden structure that reminds me of a tree house, and our beds are shrouded by mosquito nets that make us all feel like princesses as we sleep, even though our feet hang off the ends of our mattresses. Tigre, referred to by his owners as “crazy dog,” is the dog of the finca, and as his name implies, he has beautiful brown and golden streaks on his body. He also loves to play fetch with large rocks and refuses to play with toys or sticks or anything less unwieldly.

Unfortunately, we found out this week that we can no longer stay with the Naso-Teribe indigenous community, our originally-planned next step, because the drought is so bad here that the river which serves as the only means of access to their land is too low to travel on by canoe. Instead, we have made last-minute plans to stay with the Bri Bri, an indigenous group here in Costa Rica. There is a lot more uncertainty surrounding this plan, and that, in combination with my desire to pack light for this short stint in Costa Rica, convinced me to leave my camera behind in Panama. That was the biggest mistake I’ve made so far this trip. Since coming to Costa Rica I’ve had great opportunities to photograph howler monkeys, toucans, and countless spectacular colorful birds that reside in the idyllic little geologic bowl of this finca. I think I’ve learned my lesson: it’s worth bringing my camera into potentially unsafe situations to get the best and rarest photos.

I’m easing the pain of these missed opportunities by telling myself I’ll have plenty more chances for truly exotic photography back in Panama, but something feels profoundly different about Costa Rica. It is a country that has long understood the importance of its biodiversity, and has no wealth-creating canal to infuse its politics with corruption and remove the onus of income generation from ecotourism. The polarity between Costa Rica and Panama is best seen by examining the natural park and biodiversity reserve that they share, straddling their border in one of the most biologically rich places in the world – Parque Internacional La Amistad, or PILA. Both countries manage their own sides and without getting into too much historical detail, it’s safe to say that Costa Rica is doing a far better job than Panama when it comes to the goals of a protected area. I highly encourage you to look up more about it if you’re interested, because PILA is one of the largest protected areas in the world and has been explored very little.

Yesterday our host father took the five of us staying at this finca on a short nature walk through his property and down to the state-protected river that runs through the land. We sat with him in a little wooden structure overlooking the water. He left after speaking with us for an hour about the importance of the land and the river to his life and his childhood, and then I headed down the side of the slope and into the river, where I climbed my way along the rocky path of the water. We had just come from Boca del Drago, an island beach in the Bocas del Toro province on the Caribbean. Though it was a beautiful place and the ocean and beaches were amazing, something about the setting of an island really made me feel uncomfortable. The whole time we were there, which was just about a week, I felt strangely on edge for a reason I couldn’t quite place.

It was only when I was sitting on one of the boulders in the river here in Costa Rica, enveloped and small in the rising mountain slopes that flanked both sides of the streambed, listening to the constant white noise roar of the water cascading around and past me, that I realized that rivers and mountains are what make me feel safe and at home. I had never felt more relaxed or more comfortable on this entire trip than I did right then, and I had never felt more anxious or more uncomfortable than when I was on the island—completely flat and surrounded by ocean. This is never something I’ve really considered before, that something as simple as the geography of the region I’m in can have such a profound effect on my mental state, but it’s something I’m glad I’ve realized—I need mountains.