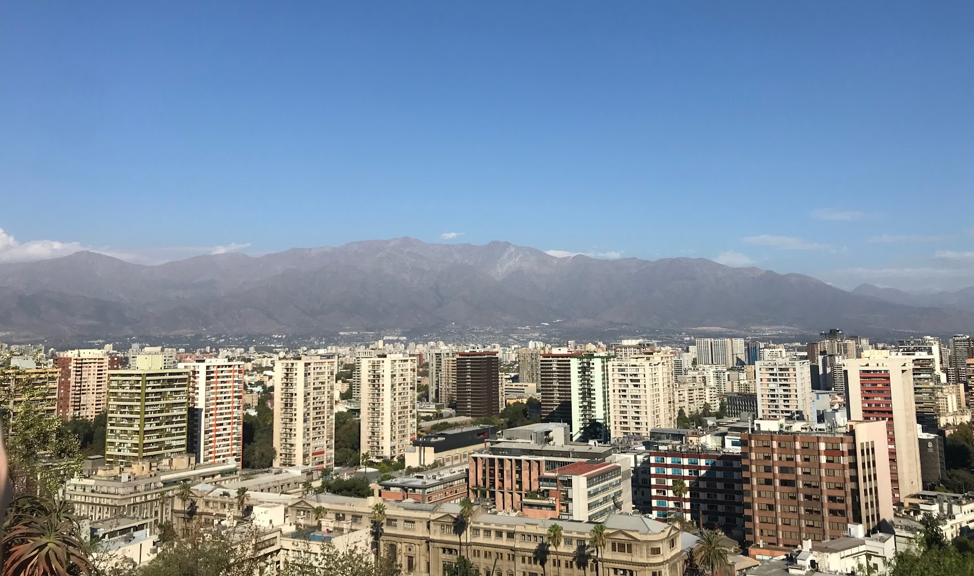 Featured image: The Santiago skyline from the top of Cerro Santa Lucía

Hello from América del Sur! Trading wintry New York for sunny Santiago has been strange, but in the best way. Many of my friends were abroad for almost two months by the time I left for Chile, so it wasn’t until my flight landed that the trip finally felt real. Adjusting to life in an unfamiliar city is challenging, especially since I’m clearly “extranjera” (foreign) with my map of the metro and highly imperfect Spanish. At the same time, any nerves I had before leaving have been replaced by a sense of gratitude and excitement about exploring for the next three months.

This semester I’m participating in a program with SIT, Chile: Comparative Education and Social Change. As part of a cohort of 17 students, I’ll spend time in Santiago, Temuco, and Valparaíso, Chile, before traveling to Buenos Aires, Argentina for two weeks. In May, I’ll complete an ISP (Independent Study Project), conducting interviews and field research before writing a 20 page paper entirely in Spanish . . .  light work!

Our program orientation took place in Algarrobo, a postcard-worthy coastal town in central Chile. Since Chile has opposite seasons from New York, we saw families savoring their last week of summer vacation before the universally dreaded “back-to-school.” For two full days we discussed cultural norms, what to expect when living with homestay families, and how to move safely around Santiago, where we spend the first month of the program. We were also warned about “la araña de rincón,” an extremely poisonous spider native to Chile! Luckily, I’ve been completely calm about “la araña” and definitely don’t think about it on a daily basis.

As orientation came to a close, most of us felt very prepared and yet completely unprepared to jump into life abroad. Even after only two days, it felt natural to be vulnerable and discuss our fears. Almost two weeks in, I feel totally comfortable around my cohort, and it’s hard to believe we all just met. Our shared interest in education and Chilean culture acts as a common thread, but each person also brings a unique perspective from their university and hometown in the U.S.

From Algarrobo, we drove to Santiago to meet our host families in a ceremony that resembled a sorority Big/Little Reveal. My “mamá chilena,” Adriana, has been hosting students for 18 years and is one of the most caring people I’ve ever met. Although I was nervous about the homestay experience initially, it has been crucial in helping me immerse myself. Adriana and I communicate solely in Spanish, which requires me to describe words I don’t know (e.g. “kettle” becomes “the place where you put the water to make it hot”). She’s extremely patient as I stumble through stories at dinner, feeds me a ridiculous amount, and calls me “Oli,” “mija” or “linda,” which never fails to make me feel loved. Adriana is also my source for the best places to visit in Santiago, and I’m slowly chipping away at my list!

As much as I’d love to tour around Santiago every day, classes with SIT keep me busy. This past week we started an intensive Spanish course at Universidad Alberto Hurtado to boost to our language skills. We’ve also begun studying Chile’s political history, particularly how the U.S. helped facilitate the 1973 Chilean coup d’etat, which resulted in Pinochet’s brutal military dictatorship. Our visit to Museo de la Memoria y Los Derechos Humanos (Museum of Memory and Human Rights) powerfully demonstrated the suffering of the Chilean people during the dictatorship, a topic not covered in history classes in the U.S. despite our involvement. Eventually, we will examine how the political and educational systems of Chile intersect, so I’m glad to be building a base knowledge alongside my peers.

On Friday, March 8, we attended a march in honor of International Women’s Day, as part of the “Huelga General Feminista” (Feminist General Strike). Women around Chile were called to “strike,” and stop their regular activities to engage in forms of protest. The march was grounded in a set of 10 demands that aim to ensure the well-being of women in Chile, which were represented passionately and artistically by participants. I was inspired by the sheer number of people who took to the streets, as well as the sense of hope the march evoked.

I end each day exhausted, but with a sense that I’ve learned an immense amount. Adjusting to a new language has been the most difficult aspect so far, and I often feel fatigued because my brain is working overtime even during simple conversations. Since the only way to learn Spanish is to speak it, the next 13 weeks are sure to be full of mistakes, attempts at using “chilenismos,” and laughing at myself when I confidently say something incoherent.