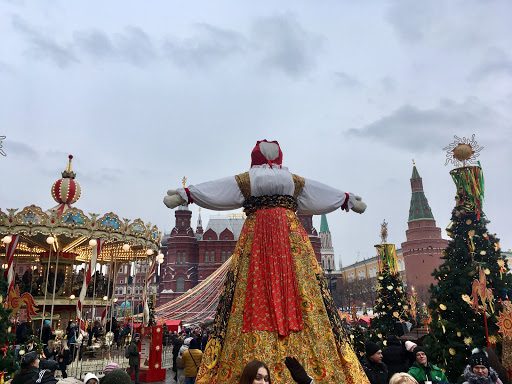 Featured image: The chuchula (scarecrow) of the Maslenitsa celebration near Red Square, is usually burned to signify the end of winter and rebirth of spring.

Privet! I’ve been in Moscow, Russia for just about a month now, and so far it’s been a whirlwind of new people, new words, and new sights.

Before I left, I worried a lot about the semester ahead and constantly asked myself if I had made the right decision by staying abroad for the spring. At Moscow State University, I wouldn’t have last semester’s comfort of having familiar faces all around me; as the only one on my program, I’d have to start fresh and make new friends. I had no idea what to expect.

One eight-hour flight later, I groggily waddled off the plane, nervous and excited but really just wanting to hibernate for twelve hours straight. Anya, a Russian student from Moscow State, met me at the arrivals gate, and we took a taxi back to the university campus. Sitting in the infamous Moscow traffic, we realized that we’re in the same year, the same faculty (what departments are called here), we both love languages, traveling, and American hip-hop music. She and I instantly became good friends.

Off to a good start, right? Well, not exactly.

Day 1: “perviy blin komom,” or “the first pancake is always a flop.” Just about everything possible went wrong: the men who came to fix my broken overhead light unexpectedly came at 8:30 am, shocking me out of my glorious slumber; I only learned I had to go to my first class five minutes before it started (and forgot to bring any pens or paper); and of course, I almost hyperventilated after getting really lost in the Main Building. I walked around in circles for about fifteen minutes, garnering stares from the security guards, before exiting the building and using Google Maps to find my dorm. I live in one sector of the Main Building, and all the sectors are connected inside by elevators and winding paths. It’s an enormous, beautiful, and intimidating labyrinth of Stalinist architecture.

I’m studying in the Department of Foreign Languages and Regional Studies here, and my classes are full of people from all over the world. In my section, there are students from Finland, Sweden, Australia, Germany, the Czech Republic, South Korea, and Slovakia (my wonderful roommate!). Taking seven zanyatiya (classes) of Russian language a week has brought us closer together, as we’ve had to learn how to explain the tax systems in our respective countries, how to decline numbers in all six cases (which is so maddeningly difficult that native speakers sometimes don’t even decline them properly), and how to work on our accents in Russian. Apparently, most of the time I sound like I have some kind of Estonian or Baltic accent in Russian, but what really surprised me was my mom telling me that I have a different accent–Finnish or Swedish–now in English. Speaking so much Russian every day has all the words in both languages constantly swirling around in my head, so that sometimes it’s difficult for me to find the right word in either language.

I suppose that’s culture shock, right? I’m taking three more classes on top of the Russian language classes, two international relations classes taught in Russian, and one culture class taught in English, so I’m constantly switching between the two languages and always trying (and often failing marvelously) to express myself correctly. The first day I showed up to my international relations classes, the other students seemed incredulous that an actual American had joined them to learn about their country and my own. The professor, also in disbelief, asked me what I was doing there. But now we joke easily in class, and I feel welcome.

For the most part, my culture shock has been from using Russian way more than I ever have, from the food (there’s mayonnaise in a lot of random foods and I’m also missing some specific American brands), and from the bureaucracy. One crucial distinction between Moscow State and Vassar is the sheer amount of paperwork and security in each building. Everyone needs a student ID, dormitory ID, student registration, dorm registration, and various other papers to study, live here, and move from building to building. At the beginning of the semester, my friends and I liked to joke that the process of paperwork was absurd–you come to the office to receive one document, but the person who’s in charge of that isn’t here today. They will be tomorrow, though, and only at a time when you’re unavailable!

Aside from these cultural differences, Moscow has been incredible. The city is absolutely huge–it takes twenty minutes at the minimum to get anywhere by foot or by metro–and chock-full of interesting museums, landmarks, parks, and attractions. I feel like I see a lot more of the city just because I have to spend more time traveling. The scale of Moscow is bigger than Saint Petersburg, where I lived last semester, so it’s a bit overwhelming, but exciting and full of possibilities. A lot of people compare it to New York City, which seems right, because you can definitely feel the energy and pulse of the city, and hear a lot of different languages. I’m also not living in the center of town like I did last semester, but on an expansive university campus, so I get to experience both student life and city life.

Today is International Women’s Day, an important holiday in Russia (for which we get school off!). It’s customary to congratulate all the women in your life and give them a bouquet of flowers. Today I went to Red Square in the center of Moscow to see the Maslenitsa festival (a week-long Slavic folk and religious holiday marking the end of winter and beginning of spring), and almost every woman and girl had flowers in her arms.

Life here definitely has a faster tempo, and I can’t wait to experience as much of Moscow as I can.