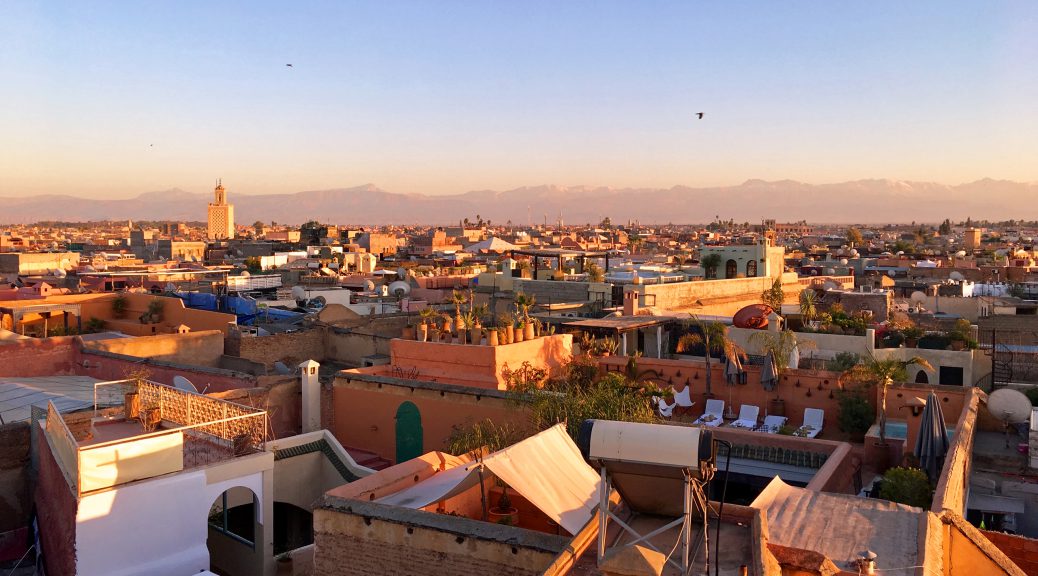 Featured image: The view of Marrakech’s Medina (old city) from the roof of the riad where I stayed. Riads, many of which have been turned into hotels, are traditional Moroccan houses centered around an interior courtyard.

I know you just clicked on a post tagged, “London, England,” but sorry, this is a dispatch from Morocco. I promise that I am living in London, do have classes to attend there, and don’t spend all of my time traveling. I will be back to writing about London soon, but while I’m abroad, I’m making an effort to see a few places I’ve never been before, and I’ve dreamed of visiting Morocco for years.

On the drive from the airport just outside the city of Marrakech, I was immediately reminded of my home state of California. Not exactly my home-home; I’m from often-foggy Northern California. This was more reminiscent of the desert outside of Los Angeles. In sharp contrast to the gray, dreary London I’d left, unrelenting sunlight shone down from a blue sky bigger than I’ve seen anywhere outside the southwestern United States. Palm trees and orange groves lined the road, and snow-capped mountains rose sharply in the distance.

But while its surrounding landscape may have reminded me of more modern towns like Palm Springs, once we passed through the walls of the Medina, as old Marrakech is known—constructed, like most of the city’s historic buildings, from sun-bleached red sandstone—I could see and feel each of the 6,000 miles and 1,000 years separating Morocco and California. Most of the Medina’s labyrinthine streets are too narrow and twisting for cars, and are instead filled with speeding motorbikes and straggling donkey carts. The skyline is a jumble of buildings abutting each other, all different heights and shapes. Like London, this is a place that has seen many different lives.

I was pleasantly surprised by the relative lack of harassment I faced there. After my experience in Istanbul a few weeks ago, being hounded practically every few feet to buy something or eat at a certain restaurant or hire a guide, I was worried that there would be more of the same, or worse, in Morocco. I’ve read a lot about Morocco not being a great destination for women traveling alone or in small groups with other women (I was there with my mom). However, I was bothered less than I was in Istanbul, and almost none of the harassment was sexual, which I had read Morocco was notorious for. A boy did pinch my butt once, but considering that he was about eight years old and had first demanded a dirham (a unit of Morocco’s currency) from me, that simply felt rude. Of course, my experience does not discount those of many other women who have been made to feel uncomfortable or unsafe here. I’ve been told many times that I give off a strong, if mostly unintentional, don’t-fuck-with-me vibe, which can be both a positive and a negative. I believe it’s at least part of the reason I’ve faced relatively little sexual harassment in my life, yet it also almost certainly contributes to the barren wasteland that could charitably be called my dating life. But as a female traveler, resting bitch face definitely has its benefits.

Unfortunately, amidst the wonders of Morocco, I also had the dubious pleasure of experiencing food poisoning for the first time in my life. I’ll spare you the details, but needless to say, it wasn’t pretty. In my first post of the year, I wrote about how my dad and I are enormous fans of Anthony Bourdain, who traveled to many an exotic locale and suffered his fair share of food poisoning. While I was lying on the bathroom floor at 5 a.m., my dad texted me, somewhat proudly, “You’re having a Bourdain moment!” There are many other “Bourdain moments” I would prefer to have—such as being invited into a Moroccan home to enjoy a traditional meal that doesn’t poison me—but at least I didn’t have to be on TV for this one. After this trip, I’ll be sure to follow one of Tony’s most important travel rules: always carry Imodium.

Aside from the day I was stuck in bed with food poisoning, my least favorite day in Morocco was when I took an excursion to the Ourika Valley in the Atlas Mountain foothills outside Marrakech. I booked the trip through my riad, and one of the very few bits of information I got beforehand was that it included a hike to some waterfalls. I assumed it would mostly be a chance to see a bit of nature outside the city. Instead, it involved several stops at roadside stores and a “traditional”—and clearly staged—home of a Berber family (an indigenous ethnic group in North Africa), where there was always a clear expectation to purchase handicrafts and other souvenirs before leaving. Even the waterfall hike, rather than being a chance to immerse myself in the truly breathtaking beauty of the Ourika Valley, took a route that passed through no less than five gift shops. I understand, of course, that these communities’ economies are largely dependent on tourism. But the whole thing felt like a farce that neither the tourists nor the locals truly wanted to be a part of and that was exploitative of both parties.

Curiously, I didn’t at all feel this way in Marrakech, despite previously reading that many consider it the “Disneyfied” Morocco, particularly compared to Fez. It does have its fair share of vacationers—almost all of whom seemed to be French, along with the occasional Brit, American, Italian, or German—but it felt like more than a tourist trap. As someone who is now… well, let’s say not not well-traveled, I think I have a decent sense of when a place functions mostly to separate tourists from their money. Marrakech didn’t feel like that to me. Outside of Jemaa el Fna, Marrakech’s—and Africa’s—busiest square, full of orange juice vendors, monkeys on chains, and snake charmers, most of the people I saw on the streets of the Medina were locals going about their days: women buying meat and spices and fruit for dinner, often with their children in tow; men working in a shop or one of the area’s many construction sites; and laughing schoolboys kicking soccer balls around in the Medina’s winding streets and narrow alleys.

My favorite way to see a new place is to get away from its tourist destinations and simply wander—even get lost. Marrakech, with its maze-like layout, its souks selling everything from saffron to scarves to sweets, all of it rendered in impossibly vivid colors, is the perfect place to get lost in.