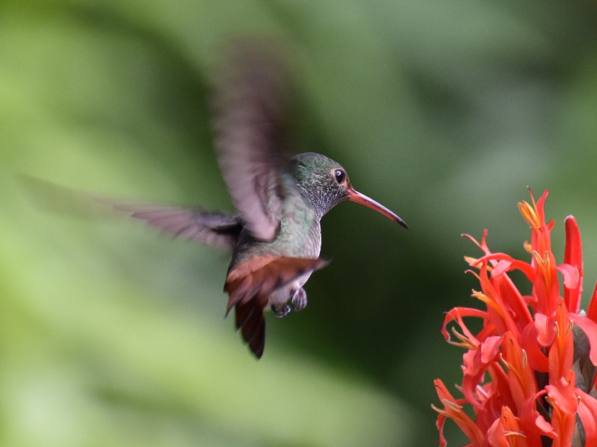 Featured image: A rufous-tailed hummingbird I took a picture of our one free day so far.

A Meditation on Panama, Life, and the Distant Future

I’m writing this by the light of my headlamp in the rural mountain community of Barrigón, Panama. There was power last night—but not tonight. “No hay luz,” my new seven-year old neighbor told me when I got back from classes at the nearby El Cope National Park. Travel abroad is intended to push you out of your comfort zone, and although I just took a freezing shower in the dark with a couple of friendly cockroaches, I surprisingly feel more comfortable now than I did just a few nights ago in the noise and development of the nation’s capital, Panama City. I don’t know what that means, or if it has to mean anything at all, but it was an interesting enough revelation that I thought I should write it down. Also—there is literally nothing else for me to do but write.

This stay in Barrigón is the first segment of an epic adventure through western Panama and Eastern Costa Rica. Through a total of four homestays, one of which will be with the Naso-Teribe people, an indigenous group, we will explore the rainforests of the highlands, dormant volcanoes, coastlines, coral reefs, and white sand Caribbean islands, all in the pursuit of scientific stimulation. Panama, though typically only associated with its famous canal in the U.S, is a spectacularly important place for the study of all things nature.

Even the formation of the isthmus 2.8 million years ago was a watershed moment in the history of life on this planet. When sea levels lowered and turned a chain of volcanic islands into a land bridge between North and South America, the resulting change in ocean currents affected the global climate such that forests receded in Africa and forced a particular group of primates out of the trees and into the savannah. Not only that, but Panama allowed freedom of travel between two massive continents that had been evolving distinct life forms for millions of years without interaction, and the resulting ecological clashes had lasting effects on the animals that live on the continents, and the bridge between them, to this day. A meeting of continents, especially here in the tropics, means immensely diverse life. Hundreds and hundreds of species of birds, mammals, and amphibians crowd this tiny strip of land, making my newfound hobby of wildlife photography that much more fun.

I guess what has become clear over the course of this scribbling monologue, and what has been running through my head since arriving here, is that the significance of this country to me lies in its importance to life, biology, and animals—the things that captivate me most. And as Panama was the catalyst of massive global changes in the course of natural history millions of years ago, it is also one of the best places to see the massive changes currently taking place. Whether it’s deforestation, habitat fragmentation, water pollution, or a warming atmosphere; from Panama it becomes even clearer that we are living in the early stages of the sixth mass extinction, the fifth of which was the famous dinosaur-ending meteor that struck the Yucatan Peninsula not too far north of where I now sit. Animals are currently going extinct at a rate far higher than a natural background rate, easily high enough to constitute a mass extinction. What’s unique about this extinction is that it wasn’t caused by a meteor or dramatic seismic events, but by us.

I approach this fact from a different angle than most others on this program. Rather than feeling the need to try to stop or slow the destruction (though I do not dispute that conservation is an incredibly noble and worthwhile cause), my curiosity lies on the other side. Each mass extinction of the past, devastating as they may have been, opened up an entire world of evolutionary possibility for the few life forms they left behind. After a mass extinction, the raw power of evolution is let loose to experiment and create, resulting in fantastic and awe-inspiring complex nature. The fourth extinction paved the way for the dinosaurs, the fifth for the birds and mammals, and the sixth? That is what I wish to see.

After we have ravaged our planet and managed to escape it, or, more likely, taken ourselves out with it, what hardy strongholds of life, hiding away where our climate-changing, water-polluting, forest-flattening forces can’t reach them, will explode back out into the empty spaces left behind and blossom brilliantly into the next era of life? That’s what I want to study. That’s why I’m here in Panama. I want to start researching just who those survivors might be, and where the post-human world might take them.

I am still unclear on just how that desire will manifest itself in the six-week independent study project I will do to cap off the semester, but my tentative, initial thoughts concern how birds that have adapted to living in urban environments (think NYC pigeons) have altered their behavior, and perhaps even their genetics, to be successful in an artificial environment that is inhospitable to so many other animals. Maybe by figuring out who is succeeding now, we can make predictions about who we will leave behind when we are gone.