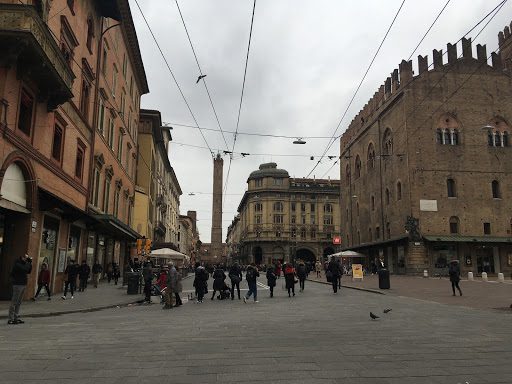 Featured image: Cloudy Centro di Bologna, with the the historic Due Torri in the background and Piazza Maggiore in the foreground.

I felt nervous about my arrival abroad, but “terrified” was never in my vocabulary. I had prepared mentally for changes, and I obviously knew it wouldn’t be “The Lizzie McGuire Movie.” But the culture really set in when it came to my POC identity and consent.

Adjusting to Bologna has been fine for the most part. Euros make more sense as a currency.

Food is just better in Italy and, surprisingly, it’s easier to be a vegan here than it is at Vassar (or in the U.S. in general). Markets, open-air or indoors, are the way to go for fresh produce, meats, pastas and dairy products. And BIO, the Italian version of saying “organic,” is pretty cheap. The Bolognese enjoy their products fresh and local.

For most locals, days begin with a caffè and brioche (aka croissants). Lunches are cheap and easy to buy, especially since Bologna hosts 80,000 students among its population of 500,000 people. Ironically, my favorite spot is a falafel joint—yes, pizza and pasta do in fact get old. Bread is also an integral part of the Italian diet, and boy have I eaten a lot of it.

Much like the food, the scenery is pretty fricking awesome. It’s a combination of architecturally magnificent medieval buildings usually covered by contemporary street art and graffiti. Walking is the preferred navigational mode, especially for that Insta-worthy pic. Walking Vassar could never compare to this new leg burn. Bikes are HUGE here, and there’s a citibike-esque company that maybe I’ll try on these rough cobblestone streets, if I’m thinking of playing Russian roulette but Thao vs. Car/Bus/Scooter/Other Bike instead.

Also, DOGS. Like traffic, the rules are just different. The locals love walking their very fashionably-coated (and yes, I mean miniature dog coats by designer brands) pets on the Portici sidewalks. However, cleaning up after the dogs just…doesn’t happen. Also, don’t try to pet or approach dogs here. Unless you have a dog with you. You will be stared at, shamed and given the biggest “Co-me (what)?” face you’ve ever received.

These lighthearted, trivial matters do shy in comparison to the two topics I mentioned earlier.

Bologna is predominantly white, and while there are tons of people from other European backgrounds, it’s pretty rare to see a person of color here. Unfortunately, local views of POCs are very narrow. With the immigration issues that are unfolding and the rise of neo-fascism in Italy, there’s also been a surge in racialized debate. North and Central African immigrants are heavily stereotyped. During a mandatory meeting with local police, the Police Captain generalized African immigrants as the crime-causers of Bologna. I was obviously disgusted but, more importantly, it directly impacted two of my Black peers in the program. Even my roommate, someone remarkably close to my age, expressed racial prejudices. She warned me to keep my distance from all POCs here, especially the ones near our dormitory. Unfortunately, we’re treated differently. When in stores, we’re often followed by attendants and the very offensive questions we receive are just “normal.” Yes, this takes place in the U.S. as well, but I’m still just unpleasantly surprised by how overt it is here. I can’t speak to how my peers feel, because I am privileged in my lighter color. Nonetheless, the atmosphere is very uncomfortable.

The other issue is consent.

Italy is indeed a very touchy country—cheek-kisses and hugs are standard greetings among friends, and casual shoulder touches occur without a second thought. But the masc/fem relations are starkly different here. And that’s where my kind of difficult story of adjusting begins.

Originally, I lived in a 12-person apartment. The kitchen and living space were shared by all, and then the bedrooms were single gender with a private bathroom. This should’ve been fine, especially since that’s pretty much the norm at Vassar. The key difference is, at Vassar I felt safe in my gender neutral surroundings. Here I did not.

I’m not going to recount the details of how I was harassed by male housemates to the point of moving housing three weeks in, but yes, it did happen. And it unfortunately culminated in one night where something did occur, something that I will remember forever in the most negative of ways. My blossoming sense of security in my home was taken away by the actions of someone, someone who I thought I could trust as a housemate, changing the tone of my stay very abruptly. The fact is that I said no, I explained no AND why not, and this person continued their actions with no remorse. And then I had to live with it and him for a week before I was finally permitted to leave my residence.

Consent doesn’t really exist in the Italian conscience. The previously mentioned police captain told all the femmes in my program that rape, sexual assault and sexual harassment just don’t happen here. He, plus my program’s staff, said we needed to dress appropriately, travel in groups and that our safety was basically of our own accord, not the prospective perpetrator’s. Moving was a retraumatizing event. I was forced to recount gritty details of the incident to every single person with whom I dealt in the process, from my program director to the dormitory security. Dormitory security wouldn’t let me move until I told them everything, down to the name of my attacker, which I truly did not want to do because I have to continue living in the same building complex. My program director even told me that perhaps my attacker was a nice person?????? The support for victims is not here, and unfortunately I’ll have to look stateside for what I need.

This all being said, the things that have unfolded here have made me realize that there are pros and cons to my choice. Stay tuned for more soon.