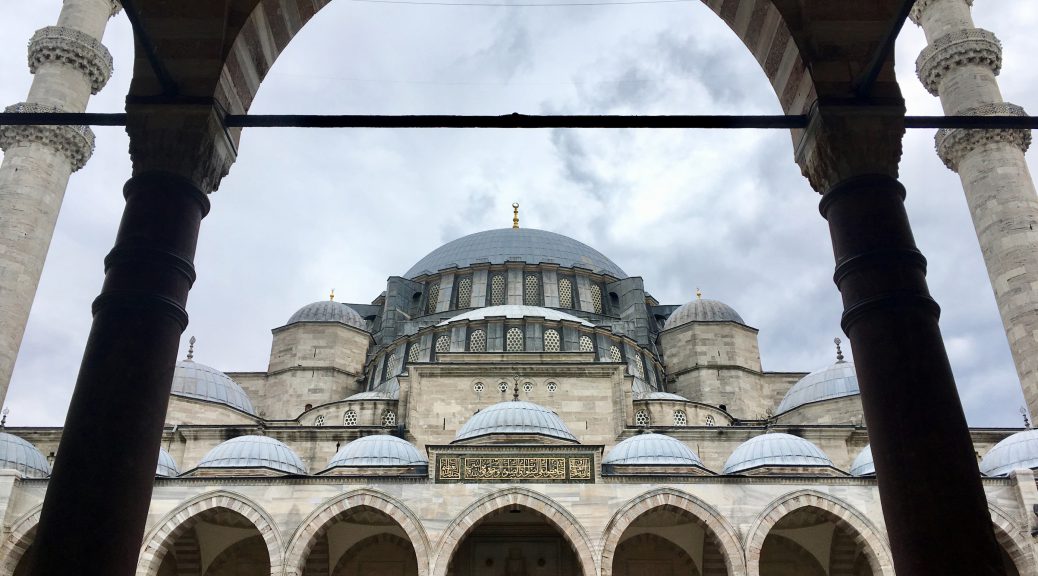 Istanbul is gorgeous. And fascinating. And overwhelming. My mom (who is visiting me in London) and I recently spent four days in Turkey’s cultural capital, which we soon realized was not nearly enough time. Somehow, despite wanting to visit for most of my life, it had escaped my notice that Istanbul is the fourth largest city in the world, with a population of more than 15 million—not including the millions more who dwell in its suburbs. That’s nearly the size of New York and London put together. I knew it was a big city, but I had no idea precisely how vast it was until our plane was landing and we could see how it just keeps sprawling and sprawling and sprawling, like no city I’ve ever seen.

Istanbul’s size is far from the only thing that can make the city feel, at times, chaotic and dizzying for a foreigner. On our first morning in Istanbul, we ventured into the maze-like Grand Bazaar. Though I knew to expect entreaties from the shopkeepers there, the constant barrage of “Hello! Would you like a [rug/scarf/leather jacket/suitcase/lamp]?,” “Beautiful ladies, come buy something!,” and even one “Cheap ginger for the ginger!” (if you don’t know me, my hair is dyed red) was exhausting and overwhelming.

These kind of aggressive selling techniques are par for the course in Istanbul, particularly in the touristy historic areas. We couldn’t walk down the street without at least five men (never women) trying to get us to buy something or come into their shop or restaurant or pay them to guide us. Only a tiny fraction of the harassment we faced was sexual, but it was still extremely difficult at times to try to walk the line between respecting cultural differences (Turks pride themselves on their friendliness and hospitality) and trying to maintain our own sanity and sense of safety as women traveling alone. We ended up mostly just ignoring the comments, but there were a few times when I had to snap at men who followed us for blocks and ignored my mom’s more polite, “We’re all right, thank you”s that no, we were not lost, we did not need their help, we did not want a tour guide, we didn’t want anything, please stop following us.

Still, despite sometimes wishing that I could just be anonymous and ignored on the street the way I am in London and New York, I loved Istanbul precisely because it was so very different from any place I’ve previously visited. We were mostly in the part of the city that lies on the edge of the European continent, but Istanbul feels more like the Middle East than Europe or Eurasia or whatever else one might classify it as—at least to someone who has never traveled to an undisputedly Middle Eastern country like Saudi Arabia or Oman. And while of course the United States and most of Europe are culturally Christian, I’d never been to country where religion is such a prominent part of daily life as Islam seems to be in Turkey. Each morning, we were awoken before sunrise by the haunting call to prayer, which sounds from many of the city’s 3,000 mosques five times a day. Except when visiting mosques, Western women aren’t expected to cover their hair, and some Turkish women choose not to, but it seems like the vast majority do wear various types of hijabs and other traditional head coverings.

In my first post a few months ago, I wrote about my attempts—and struggles—to meet locals during my travels. As an introvert, it’s not something that comes naturally to me, but I’m trying to make an effort, since connecting with people who actually live in the places I visit is an important part of traveling to me. On a trip to Portugal before winter break, I somehow got invited to the birthday party of a young woman I met through an app called Couchsurfing. At the party, I met lots of Lisbon residents and a few exchange students from Milan. But on this trip, traveling with my mom and staying at a hotel rather than a hostel, I found it harder to meet people.

The one Istanbulite we really got into a conversation with was an American expat we met on a ferry on the Bosporus Strait. He told us that he’s retired now but has lived and worked in Istanbul and elsewhere in the Middle East and Asia for decades. My mom later half-jokingly mused that he had probably been a spy, or at least an intelligence analyst. In addition to Turkish and several other languages, the man spoke Kurdish, and introduced us to another ferry passenger, a young Kurdish science teacher who was visiting Istanbul from a smaller city in eastern Turkey. The teacher confided to us that he was also feeling quite overwhelmed by the size and chaos of Istanbul, particularly due to the presence of homeless people on the streets, whom he said would have been taken care of, rather than ignored, by the residents of his hometown.

Another reason it was difficult to meet locals on this trip was that, mostly due to the short duration of our visit, we spent most of our time in the Sultanahmet neighborhood. Sultanahmet is Istanbul’s old city, the area that was once the center of Byzantium and Constantinople. Like central London, it encompasses many of the historic monuments that visitors come to see and as a result, is absolutely crawling with tourists. One of my favorite mornings in Istanbul was when we ventured a tiny bit further out to the neighborhoods of Balat and Fener. These are Istanbul’s historic Jewish, Greek, and Armenian quarters, though many residents left to resettle in Israel after 1948. The area is full of hilly, winding streets lined with colorful, somewhat elegantly dilapidated buildings, along with newer hipster coffee shops and vintage clothing stores. While, as a UNESCO World Heritage Site, Balat and Fener are not devoid of tourists, they were the only places we saw in Istanbul where most people seemed to simply be residents living their lives.

Though I found a lot to love in Istanbul in just four days, I know we barely scratched the surface of this intricate, complex city—not to mention the country of Turkey as a whole. It may not be for years, or even decades, since there is so much of the world that I’ve yet to see, but someday, I’ll be back.