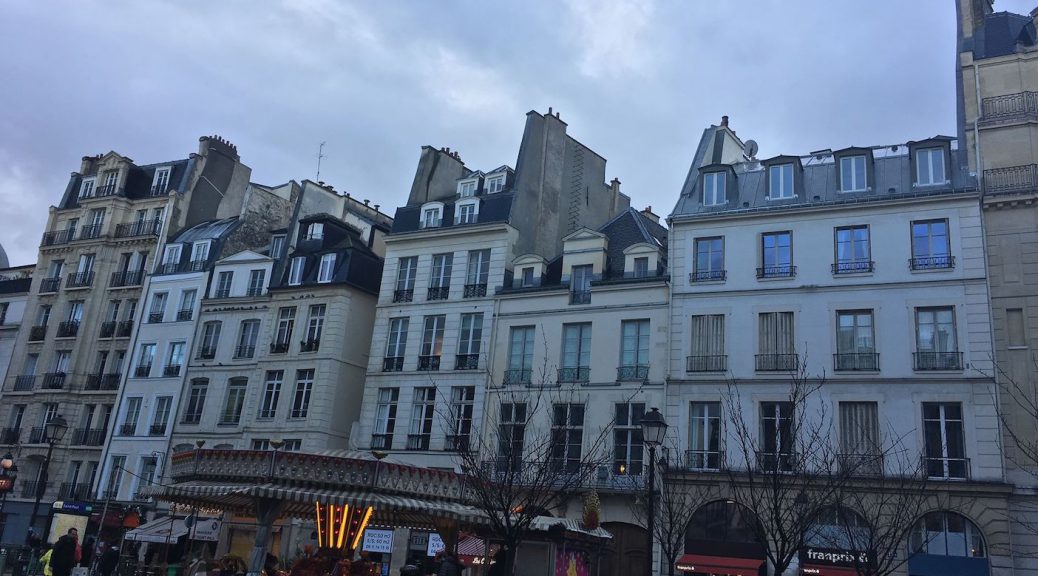 I’ve been back in the United States for almost a week now, and my four months in Paris feel like they were years ago. I attribute that mostly to the fact that I’ve been working nonstop at my retail mall job (is there anything more American?) since the morning after I got back, and doing boring adult stuff between shifts, like getting a haircut and scheduling doctor’s and dentist’s appointments. A stark contrast from my last month and a half in Paris, where I went to approximately a million museums. Highlights include the Orangerie (beautiful Monet paintings), the Pavillon d’Arsenal (architectural plan of Paris), and the Jardin des Plantes (animal sculptures lit up at night).

I also hit up Madrid, which involved getting on a plane with a stomach bug (not recommended, but I lived), to eat churros dipped in chocolate and drink sangria (also not recommended with a stomach bug). I then went to Amsterdam to visit a Vassar friend studying there. It was rainy and cold, but the city still left me breathless with its architecture and gorgeous canals (and mini pancakes). I also went to a comic book museum and squeezed in a solo day trip to Brussels, where I took tons of pictures of the Atomium, a structure leftover from the 1958 World’s Fair.

My best friend from high school took a break from studying abroad in London to come visit, and we spent the whole weekend drinking hot chocolate in various cafes – which, coincidentally, is also what I did when two other friends from home stopped by during my last week for a whirlwind visit. I spent Thanksgiving eating crepes with a friend’s family who was visiting at home, and for someone who doesn’t like turkey, it was pretty perfect. Although I did feel a little homesick while video chatting my parents. Towards the end of the program, I was pretty ready to leave Paris. Existing in another language and constantly worrying about committing a cultural faux pas is exhausting.

So of course, right as I was ready to leave France, my parents came to visit. It was great to see them, and I got to do classic French things I hadn’t done all semester, like eating steak frites and French onion soup, and visiting cathedrals. Trying to fill them in on everything I did this semester was tough, especially when I realized how much of it I’d already forgotten. My first two weeks in France were marked by an allergic reaction to getting literally hundreds of mosquito bites, and I hadn’t thought about it in weeks until I remembered to show my mom the scars I still have on my legs.

I wasn’t really proud of myself for having gotten through the challenges of studying abroad until I was navigating the city through my parents’ eyes. Suddenly I realized how much knowledge and understanding of French culture I had picked up until I was telling them not to do things like talk loudly on the metro and explaining the Yellow Vest protests to them. My parents are great travelers, but I didn’t realize how much I’d settled into French society until I noticed how they stood out. I was their translator, and switching from conversations with them in English to smooth fluent conversations in French with Parisians was something I noticed and felt good about.

As someone who struggles with transitions, I was surprised that I settled right back into American life. Of course, I’m anticipating a harder transition back to academic life at Vassar, and maybe the whole thing will hit me later. Everyone at home keeps asking me how my study abroad experience was, and they always emphasize the fact that I was in Paris, which I think holds mystical properties for many Americans. And it’s true that there were many moments in Paris that felt magical and studying abroad was an unforgettable opportunity that I’m so lucky to have had. But there were also many difficult moments during the semester, and I’m trying to be honest with people about the highs and lows, because I think it’s important to portray study abroad as a multi-faceted experience.

I also don’t think I drastically changed during my time in France. I gained a little more independence and moved one step closer to real adulthood, but I think I’m fundamentally the same person. Yet as I thought more about it, I came up with some non-academic things I accomplished, like learning to eat in restaurants and go to the movies by myself, and learning how to make do with different situations. I think living in another country, particularly one where you’re speaking a different language all the time, is hard but rewarding, and I intend to reward myself for making it through the semester with American bagels and Dunkin’ iced coffee.