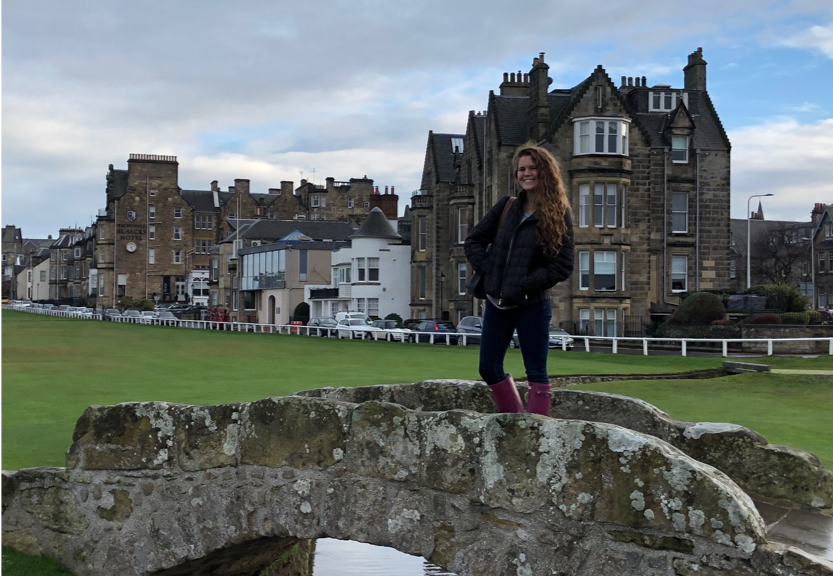 Featured Image: The famous Swilcan Bridge on the Old Links Course in St. Andrews. This course was the first site where golf was played in the 15th century! The British Open has been held on this course almost 30 times. It’s customary for golf champions to publicly show some sort of respect to the bridge.

When people ask for photos of St. Andrews I’m never sure what to send. The concept of one or even a few photographs which will depict the feeling of a whole town is difficult. As someone who adores photography as an art form, touristy photographs are not my specialty nor my favorite. I prefer details.

St. Andrews is made up of endless stone walls from the 1700s which are topped with stray patches of fluffy, emerald moss. The buildings are made of neutrally colored stone, with varying shades of brown, gray, and off-white. There are at least three chimney pots on each roof. They seem to form an army overlooking the city, as if protecting it. The neutral greens and browns that coat the city, although dulling at times, do allow for a stunning contrast to occur. When the constant blanket of gray clouds lets some blue sky peek through, even if just for a moment, it allows for an indescribable appreciation for something different.

From some spots in town, on the far horizon, it looks like the ocean is taller than the land. The view of white-caps glisten on a sunny day or call for a heavier coat on a cloudy one. My favorite spot in St. Andrews is the East Sands beach. There are three big beaches at St. Andrews: West Sands, Castle Sands, and East Sands. West Sands is the longest beach of the three. It is the perfect length for a morning or evening jog for those who like that sort of thing. Overlooking West Sands are St. Andrews’ world-renowned golf course, a quaint town aquarium, and, ironically, one of the town’s nicest seafood restaurants. As a popular tourist group drop-off destination, there are plenty of selfie sticks, fanny packs, self-proclaimed golf fanatics, and point-and-shoot cameras to be found there.

Castle Sands is in a cove directly under the cliff which serves as a throne to St. Andrews’ Castle. The Castle, or should I say ruins of a castle, is still a very popular tourist destination, but the beach underneath is occupied by students. During the day, many students will picnic on the rugged rocks under the cliff. This is a seagull heaven. The seagulls learn quickly to hover on ledges of the cliff, waiting for students to leave food unattended. Any night on Castle Sands, one can guarantee that there will be a group of students huddled around a bonfire, blaring and belting a Kings of Leon song or an alternative throwback that makes you question where you’ve heard the song before.

East Sands lays directly next to the town pier. Tourists are advised to walk to the end of the pier because when you get there, if you turn back, you can see the castle and the ruins of the town cathedral in addition to the skyline. Also, the buildings that welcome fishing boats into the tiny port are brightly colored. This is a drastic difference from the rest of the coloring of the town. The bold pinks, blues, greens, reds, purples, and yellows of the garage doors of the homes alongside the pier allow for a welcome change. It makes for the perfect picture. East Sands itself is a mix in length between Castle Sands and West Sands. It is long enough so that you can’t recognize anyone at the end once you’re a quarter of the beach away, however you can still determine whether or not a dog is cute enough for a pat from the other end of the beach… Although, let’s be real… every dog is.

In addition, this is essentially child and dog beach. I have met more locals on East Sands than I have anywhere else in town. East Sands is where the locals come to let their dogs run off-leash after they get home from work or where they bring their children to play on weekends. The combination of dogs leaping through the freezing sea-water and then rolling in sand and tiny children stumble-running with red pails in hand makes for quite the uplifting, tranquil environment. The combination of the chirping of seagulls riding on the wind above, children giggling unencumbered, and dog’s paws clinking on shells when not sinking in the sand frees your ears from worries that may otherwise consume. The smell of green saltwater mixed with fresh fish and a hint of bonfire from the night before seeps into your lungs. The 40 minute walk from my apartment to East Sands is consistently worth it.

The nights are quiet, except around the golden-hued pubs. The brew in these social hubs matches the weathered beards of the old golfers in their tartan vests who gather in after a round of 18 holes on the famous Old Course. The sounds of the pub — clinking, sloshing pints, deep, hearty laughter, and the sound of Scottish accents, characterized by an upward-rolling sound — is joyfully deafening. The surprisingly talented flautist in a sweatshirt outside Tesco playing a whimsically crisp solo from a sonata also fills the town with a certain cheerfulness.

However, the further one gets from the central street in town, the quieter the night becomes. The wind is the only constant presence whether — it’s a subtle yet consistent breeze, or an unexpected gust that yanks against your umbrella just when you’ve loosened your grip. At night the clinking of your own shoes is the loudest sound around. A small group of students heading into town may saunter by, taking up the whole sidewalk (which was obviously built for only two people side-to-side) in the process. There is also the occasional whir of a smart car engine puttering past. However, after the car whizzes by and their carefree yet deafening British rap fades into the flat horizon ahead, it is back to silence. At the end of the day, St. Andrews is… hushed.