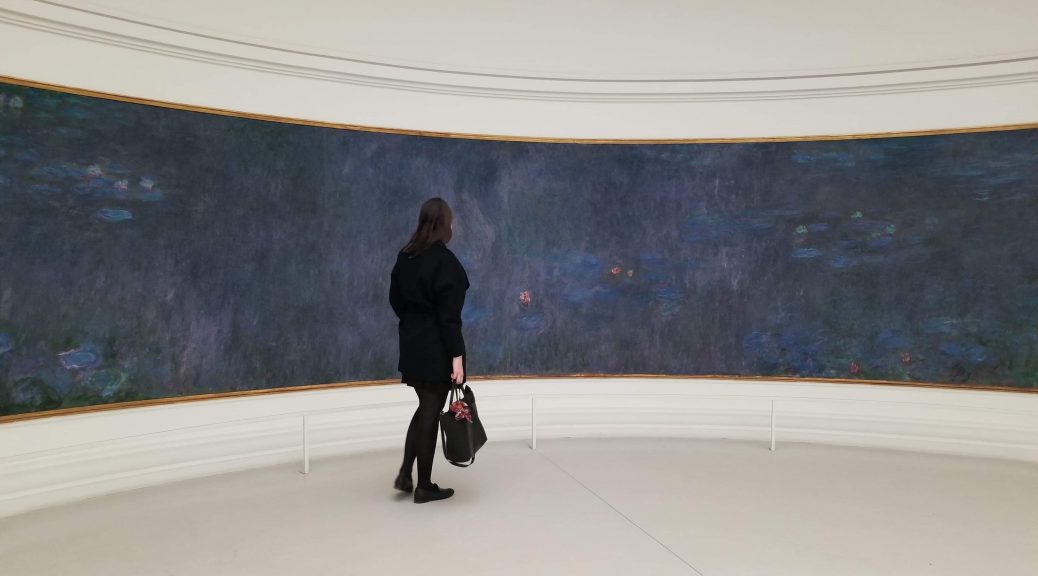 Featured image: Me at L’Orangerie, looking at Monet’s water lilies

Before I began this semester, I never would have imagined that on Thanksgiving, I’d be sitting at a table staring down a 20-pound turkey. And yet, that’s exactly what happened a few days ago when my host family decided to reconnect with their American roots (they lived in the United States back in the early 90s) and cook an entire Thanksgiving meal. That evening, the apartment was filled with old American friends—my parents included, who were visiting for the week—conversing in an odd mixture of French and English.

Since I’d mentioned a few times before that I loved to bake, I was swiftly put in charge of making the dessert. In the end, I decided on my great-grandmother’s graham cracker cream pie, many ingredients for which my mom ended up packing in her suitcase (graham crackers don’t exist in France, apparently!). As I stood in the kitchen, resting my wobbly arms from whipping the cream by hand, I realized how funny it was that I was celebrating a holiday I’d only ever known thousands of miles away.

In that moment, both French and American culture became synonymous with home. My host parents laughed with my real parents, we drank French wine and ate American cranberry sauce, and the rapid switches between languages felt natural. The evening allowed me to preemptively see how I had grown in the last few months, while also staying true to what I’ve known my entire life.

Besides Thanksgiving, November has been a whirlwind of a month. Two weeks ago, I managed to escape the hustle and bustle of Paris to spend a weekend exploring Brussels. In keeping with the food theme of this post, I veritably ate my way through the city. From pillow-like waffles piled with whipped cream, to traditional moules-frites swimming in garlic butter, I made it a point to taste every Belgian specialty I could find. Sitting here now, I’m munching on my last chocolate bar (I brought back five total, no judgment please).

While in Paris, however, I’ve had a front-row seat to some of the city’s largest events in the last month. Because I live just a few hundred feet away from the Arc de Triomphe, I got to watch the centennial celebration of the end of World War I. The presence of over 70 heads of state shut down my metro station, and forced me to weave through alleyways in order to come and go from the apartment. In addition, I witnessed the already infamous protest-turned-riot of the gilets jaunes, who disagree with rising fuel prices and the policies of President Emmanuel Macron. When I left for lunch that day, I had to hurry away from clouds of tear gas that had drifted down our avenue.

On a somewhat calmer note, I’ve also been maximizing what little time I left in Paris to check everything off my sightseeing list. I had mint tea in the Grande Mosquée, the largest mosque in Paris; I spent a morning admiring Monet’s work at the Orangerie; and I learned how spider webs can make music at the Palais de Tokyo. Once I finish this, I plan to scramble through the cold Parisian rain to finally see Notre Dame, one of the largest touristy places in the city.

It’s wild to think that my next post will likely come from my home in New Jersey. With only three weeks left in my program, I’m trying to conceptualize just where the time has gone. Until next time—I’ll see you in the U.S.!