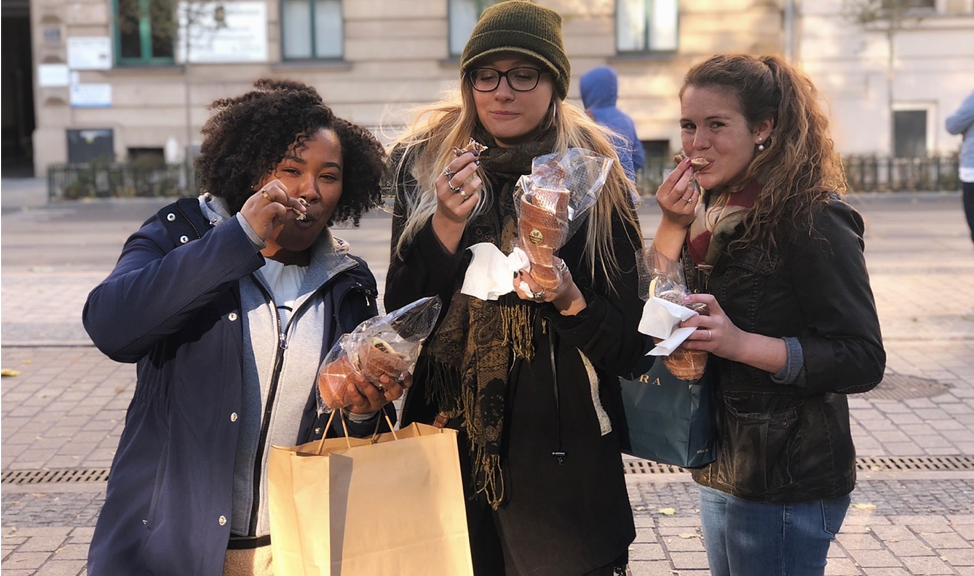 University of St. Andrews has a tradition of “Raisin” weekend. Similarly to Vassar’s Founder’s Day, Raisin revolves around camaraderie and of course… a lot of drinking. After being adopted by an “Academic family,” you can expect to have a few family gatherings before Raisin Sunday/Monday. Each family has their own personalities and focuses, however it can be tough to determine what those focuses are with such a short time between the beginning of the semester (September 17th) and Raisin (October 21st and 22nd). Although families are set up to be a type of support system, I found that they tend to be highly alcohol-focused… so a very specific type of “support.”

The family system is a very hierarchal system, which was interesting to see from the perspective of an older new student. The first family gathering that we had was quite jovial and laid-back. The gathering revolved around getting to know the family — “academic” aunts and uncles included. My “academic” mom provided more food than anyone could think to consume, in a very grandmother-like fashion. Drinks were provided, but they were not forced upon us in any way whatsoever.

The second gathering was a drastic escalation of drinking and was further from the get-to-know each other activities that I was expecting. The push towards drinking a lot was increased and social pressure became more evident. I was the only one of the academic children that was not a freshman. The academic parents were all sophomores or juniors as well. It was intriguing yet disturbing to see the first years so easily succumb to the pressure to drink themselves into a slumped, lethargic state. The most common response when I asked someone why they were doing something, was that they “had” to. The social pressure causing the first years to drink so heavily made it seem like they did not have much choice in the matter. However, the term “hazing” is not in the vocabulary here. It is highly frowned upon and even the freshmen become defensive as soon as the term is used.

Raisin itself is a huge weekend at St. Andrews, socially and culturally. On Raisin Sunday, the academic families meet early in the morning. The activities of Raisin, decided by the academic parents, are kept a secret from the academic children. The anticipation of Raisin is high, especially because of the stories of past Raisin weekends. Some of these stories are as wild as being “kidnapped” from your dorm room at 5AM, being stripped and taped to a fountain with a handle taped to your hands until you finish it, or being forced to jump into the North Sea (which at the moment is 43 °F). For some, these stories are fun and adventurous, yet for others they just cause panic on Raisin-eve.

When people say Scotland is cold and rainy, they mean it. Approximately three days per week we get the gift of sunshine. However, this is not typical sunshine. This is a moment of looking out your window and seeing that there is no rain. It may still be overcast, however, this is essentially a Scottish holiday worthy forecast. If it is gross and rainy on Raisin, don’t expect special treatment. Expect to get dirty.

Raisin was an interesting cultural aspect to observe. Many believe that binge-drinking is only an American habit, but Raisin suggests otherwise. The goal is for academic families to strengthen their social bonds by doing comical tasks while they are absolutely trashed. However, I must note that academic families do say that you don’t have to do anything that you don’t want to do. When you feel that you have hit your limit, drinking-wise, you have the option to stop at any point. However, the amount of people who actually stop at their limit is slim, due to the social pressure to keep going.

The fear of missing out takes lives on Raisin. For study abroad students, it may not be the social pressure from older students which is driving them towards utmost intoxication, but self-imposed pressures. While abroad, there is a pressure to do it all. Push yourself. Get out of your comfort zone. Take advantage of everything while you’re young. This constant pushing can be beneficial, however, it can also be harmful.

Something that I have noticed from living with four other study abroad students from the US and Norway, is that things will follow you abroad. A plane ride across an ocean doesn’t guarantee easy transitions. As far away as you may feel from home sometimes, home follows you. Constant access to our homes via technology is both a perk and a con. Triumphs and struggles of friends and family from home are ever-present in your “new” life abroad. It can be hard. If things aren’t going well for people closest to your heart at home, not being there can be brutal. However, it is also incredible to be able to stay in the loop with those you love when they are experiencing wonderful things and you are too.

Finally, something that people rarely talk about is that study abroad is not for everyone. It is culturally built up in the USA to be this huge, incredible opportunity. And that it is. However, just because it’s incredible for some, doesn’t mean that it will be incredible for you. And that is so okay. The constant push to be better, do better, and get better is so strong that it becomes an expectation. As students, we can have a hard time with this. We feel guilty when what we want to do isn’t what society is pushing us towards. If we aren’t enjoying ourselves while abroad at all times, it can feel like there is something wrong with us. Sometimes, we are simply fine as is. Sometimes, it is good to get out of your comfort zone if that is what you want. Sometimes, however, your happy place is truly the happiest place for you.