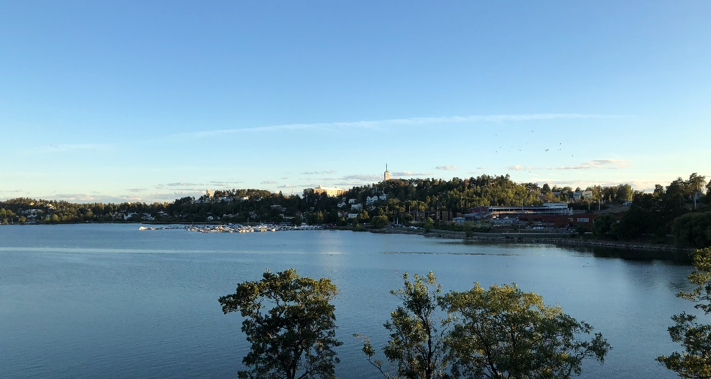 Featured image: Views near my homestay in Sollentuna.

How’s Sweden? Still dark. Still cold. But I’m still loving it. It’s already been three months since I flew in from the United States, and time is flying faster than I have ever experienced. Even though I have been here for a while, I still have yet to do any typical touristy things like trying pickled herring and surströmming, or visiting the ABBA museum. Instead, I feel as if I have really been trying to integrate myself into Swedish culture through my homestay. My Swedish is getting better day by day with the help of my host mom, and I am learning more about Swedish society by watching the news at night. However, I have also noticed many aspects of Sweden that I did not really recognize before.

When you initially move into a new, exciting environment, you feel as if nothing is wrong and life could not be better. Everything comes off as amazing, and you feel as if there are no flaws whatsoever. This is how my experience in Sweden started. As I talked about in my first blog post, I absolutely fell in love with Stockholm and everything about it. Granted, I was still basically a tourist during my first couple of weeks here, but I was still so impressed and admiring of the people, environment, and culture. But recently, as I have had the opportunity to travel to new countries very often, I have realized that like any other country, Sweden has its fair share of problems as well. I have noticed that the homogeneity of Sweden has caused many problems that occur in other parts of the world as well. Compared to London or Berlin, there is a distinct lack of diversity in Sweden, and it has led to many political debates such as the refuge crisis. It’s easy to see the difference between cities when simply walking down the city streets or on the train. This is not to say that I don’t enjoy my time in Stockholm anymore; I still love my time studying abroad and do not have any regrets. Traveling to various countries has just allowed me to realize that no matter how perfect or great a place seems, there is always room for improvement.

Speaking of travel, one of my favorite aspects of being abroad is the freedom and flexibility to do just that. Although the location of Sweden is more isolated compared to other European countries, it is still fairly easy to be immersed into a new culture in less than six hours at a reasonable price. Because of this, I have been able to continually travel to new places both inside and outside of Sweden. Recently, I took a week long trip to Berlin and Copenhagen to see some fellow Vassar friends also studying abroad in Europe, including my girlfriend. It was great to see them all in a different setting outside of campus life, and to catch up with them in a new country! For me, Germany was also at the top of my list of places I wanted to visit, so that added an extra element of excitement. Currywurst, historical landmarks, and late night doner kebabs made for a great getaway. Plus, I was able to kind of use the minimal German I remember from taking it in freshman year, which was both terrifying and rewarding

As for my life back in Stockholm, it has been crunch time recently, so I have been spending more time doing work than relaxing. My research project at the SciLife well is slowly but surely progressing, and I am also learning so much from my oncology and translational medicine courses. Coming home from class to Cosmo (our dog) jumping onto you still never gets old, and I’m starting to win the occasional FIFA game against my host brother, Eric. My housemate Seth and I have a New York vs. Boston sports rivalry, and it has been taking a beating on me since all of my favorite teams are truly trash this year. Combined family dinners with my host family and my host mom’s twin sister’s family are always something to look forward to on Friday and Saturday nights.

I’ve heard so many stories about how incredible Stockholm gets around the Christmas season. Since there isn’t a Thanksgiving break, Christmas starts right after Halloween. I’ve already tried Sweden’s traditional Christmas cookies and soda, and they have not disappointed. But as the season comes closer and closer, I can’t help but think that my time is also slowly coming to an end. It’s crazy to think that I only have 5 weeks left in the semester, but I’m also excited to come home to my family and Vassar community. I’m looking forward to the upcoming weeks and hope I can make the most of my time while I still have it!