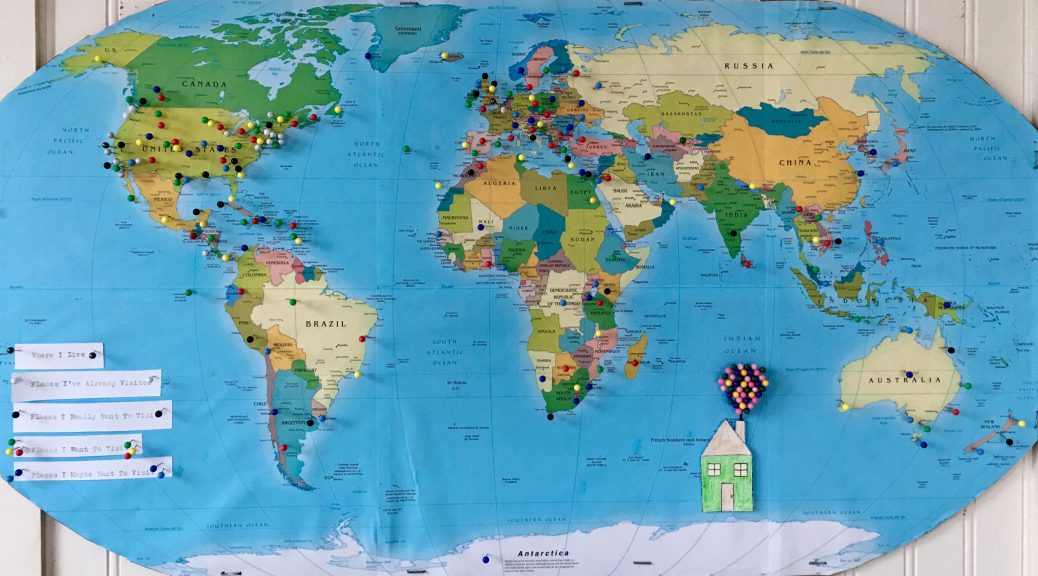 Featured image: A map on my bedroom wall at home of my dream travel destinations.

I meant to write this post about London, my new sort-of home for the next year—well, eight months—but I just got back from a week traveling elsewhere in England and in Ireland, so it felt more appropriate at the moment to write about travel.

On the trips I’ve taken so far this year (to Brighton, Cambridge, Kent, Edinburgh, Dublin, and Galway), I can’t stop thinking about Anthony Bourdain. A notable member of Vassar’s surprisingly extensive collection of famous alums who didn’t graduate, he was better known to the world as a chef, author, and host of travel television shows.

My dad has been a huge fan of Bourdain’s since the publication of his first book, Kitchen Confidential: Adventures in the Culinary Underbelly, in 2000, and I grew up watching his shows, particularly No Reservations and Parts Unknown. Bourdain is more commonly referred to as “Tony” in my house, almost like he was a family friend whose vacation pictures we saw on Facebook. A typical mention: “I’m really interested in visiting Vietnam.” “Oh yeah, Tony loved Vietnam!”

I don’t normally experience grief in any real way when a celebrity dies, but Bourdain’s death this past June was an exception. My parents broke the news when I woke up that morning, and we spent the better part of the day before I had to leave for work rewatching favorite bits of Parts Unknown and reminiscing about how he inspired us to want to travel to places we never would have considered otherwise. I think we all cried at least once. When I got to my summer job at the local movie theater, it was a struggle to smile at customers. One of Bourdain’s many books has been a constant presence on my dad’s bedside table since then.

Despite spending most of my life utterly obsessed with the idea of traveling the world, I hadn’t traveled nearly as much as I wanted to before this year. Outside the U.S., I’d been to London and Paris, Costa Rica, Montreal, and Baja California. I’m very lucky to have had the opportunity to visit any of those places, but my passport still had far fewer stamps than I wanted. Assuming I don’t run out of the money I saved from my summer job first, by the end of my year abroad I’ll hopefully have added Portugal, Wales, Morocco, Turkey, Amsterdam, Sweden, Spain, Italy, Greece, Austria, the Czech Republic, Denmark, Switzerland, Croatia, and Hungary to the list.

Which sounds great, and I’m sure I’ll be that annoying person still reminiscing about my year abroad in a decade, but the reality of my travels so far hasn’t always been the whirlwind adventure I imagined as a kid. I’m mostly traveling alone this year, both because I want to and because my friends in London have very different class schedules than me. Solo travel, in my limited experience, can be incredibly liberating, as I can go wherever I want and do whatever I want, but it can also be quite lonely.

This is why Anthony Bourdain has been on my mind almost constantly for the two months that I’ve been abroad. If I learned anything from a lifetime of watching him journey to the far ends of the earth, it’s that travel is ultimately about people, so much more than it is about monuments, or museums, or even food. No village or city or country would be as fascinating without its locals, and Bourdain had a talent for connecting with and understanding the people he met while traveling in a way I can only aspire to, as a traveler and as a journalist.

Many of my own attempts at such connections have not been nearly so successful. I’ve been staying in hostels while traveling, assuming based on my dad’s memories of a summer spent backpacking through Europe in the 1980s that they would be the best possible place to meet people. That hasn’t really turned out how I hoped it would so far. I’m not sure if the problem is my own introversion, or if I’ve just happened to stay at particularly antisocial hostels, but I haven’t managed to have a conversation longer than about five minutes with anyone I’ve met in one. Also, contrary to the youth hostel name, many hostels now seem to be populated by travelers closer to my parents’ age than mine, many of whom appear utterly uninterested in socializing with 20-year-olds like me.

Having decided that hostels aren’t necessarily the safe bet for making friends I thought they would be, I’ve tried going to bars and pubs alone, and sitting at communal café tables. But no such luck. Finally, before my most recent trip to Ireland, I decided to try making a Couchsurfing account. Couchsurfing is an app that’s primarily for travelers looking for hosts who will, as the name implies, let them crash on their couch, but it can also be used simply to meet people. It’s definitely not perfect; within a few days of making my account, I already had several unsolicited, creepily suggestive messages from older men inviting me to stay with them, despite my profile stating quite clearly that I was not looking for hosts, and according to many solo female travel forums and Facebook groups, sexual harassment on the app is rampant.

However, I did find while in Ireland that as long as you’re careful about privacy and selective about who you meet, using an app like Couchsurfing can be incredibly rewarding, too. While I was in Dublin, I met up with two other young women around my age. With one of them, I went to a pub in a non-touristy neighborhood that was full of locals and had a band playing traditional Irish folk music, an experience that I’m sure I wouldn’t have had otherwise. With the other, I had another great evening, hanging out at a student-y pub near one of Dublin’s universities and going out for Vietnamese takeaway.

So traveling thus far this year has been a bit of a mixed bag. There have been amazing moments when I’ve felt like I’ve finally made a breakthrough when it comes to meeting people, and intensely lonely moments, when I’ve spent hours and even days wandering around a new city without really speaking to anyone, and a lot in between. While in Ireland and on the flight back to London, I read Bourdain’s A Cook’s Tour: Global Adventures in Extreme Cuisines, the companion book to his very first travel show of the same name. Though the book is full of adventures, Bourdain also wrote about trips not living up to his expectations and not feeling like he knew how to stay the right things to many of the people he met and stayed with during his journeys. It’s a different side of travel than is often shown on television, and it’s reassuring to know that someone I’ve looked up to most of my life at one point—and quite possibly always—dealt with the same struggles and doubts that I’m experiencing now.

I hope travel is something I’ll continue to become more comfortable with. For now, I’m keeping in mind one of my favorite Bourdain quotes, from his book No Reservations: Around the World on an Empty Stomach:

“Travel isn’t always pretty. It isn’t always comfortable. Sometimes it hurts, it even breaks your heart. But that’s okay. The journey changes you; it should change you. It leaves marks on your memory, on your consciousness, on your heart, and on your body. You take something with you. Hopefully, you leave something good behind.”