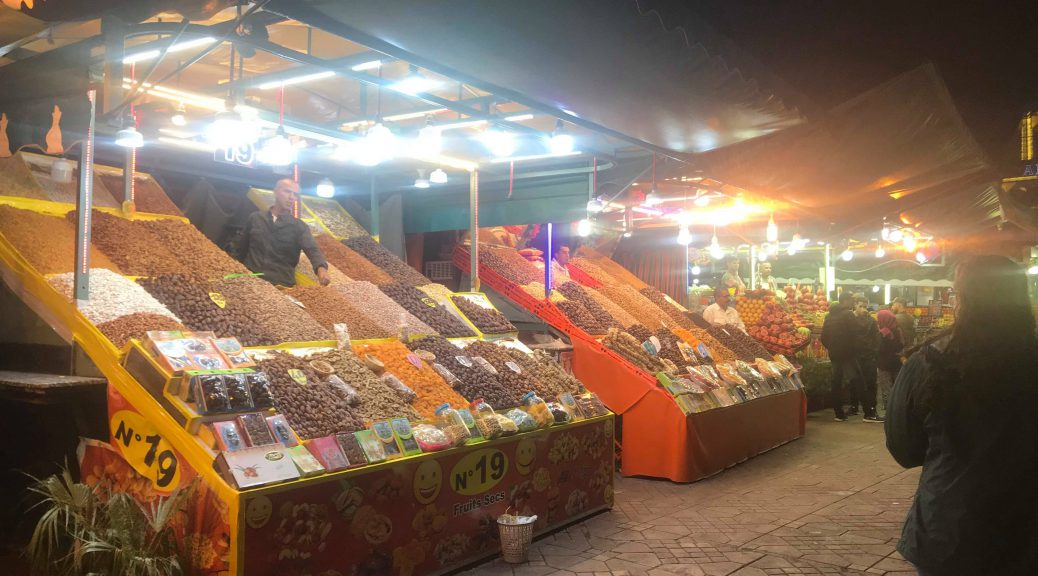 Featured image: Nuts and spices at the night market in Marrakech

August, September, October, and now November. I said it in my last post, and I’ll say it again here: time has been flying by. Since my last update in October, I’ve visited the Loire Valley with my host family, gotten some real work done at my internship, and even gone to Morocco for a weekend. Now, instead of leaving the apartment in just a t-shirt, I don’t think twice about bringing along a scarf and winter coat. I’ve also been putting in time for my classes—with papers due nearly every week, my French writing skills have made leaps and bounds.

Just to start this post, I’ve had to reference my journal and camera roll multiple times to break down all that I’ve done in the last month. That said, spending a weekend in the Loire Valley has been one of my favorite memories. Although I was reluctant to leave Paris (FOMO, anyone?), my host family’s invitation to their country home was too good to pass up. So, on a late Friday evening, we piled into the car—cat and all—and set off for the valley.

The next morning, I awoke to the sun rising, bundled myself in multiple sweaters, and did a loop around the beautiful old home. Peering out the window, I saw cows languidly chewing hay in gentle, undulating fields. A flock of resident peacocks migrated from the front yard to the back. I felt at home.

After a hot cup of tea, I hopped in the car with my host dad to drive to the local market in the nearby town of Beaugency. As he waited in line at the fish stand, I strolled up and down the cobblestone streets, observing the different vendors and buying a bouquet of orange chrysanthemums for the house. Later on, after heading home for a family lunch, I got right back in the car with my host mom to visit Château de Chambord. Though we could have easily spent hours and hours exploring the 16th century royal castle, we found ourselves lost in the maze of ornate rooms and milling tourists.

I spent the rest of my time there curled up near the fireplace, reading a book and warming my feet under a sleepy Berlioz. And while I was disappointed to leave, I was also grateful to return to the usual busy routine in Paris.

My time back in Paris didn’t last too long, though, since I then got on a plane four days later heading to Marrakech, Morocco. There with a couple of friends from the program, we spent our days exploring the city’s nooks and crannies, learning as much as we could in the little time we had. On our first day, Friday, we visited the Koutoubia Mosque, the largest mosque in the city, and a local hammam. After sitting for two hours in a steam room, we then checked out the night market for dinner.

In the next couple of days, we got lost in the souk and bargained our way out, got caught in a few downpours, and took a day trip to Essaouira—a small coastal city about three hours northwest of Marrakech. Too soon, though, it was time to fly home to Paris, and I’ve been in a daze ever since.

I’ve realized that in just over two and a half months, I’ve visited more places, met more people, and tried more new things than I ever have before. With only six more weeks left of study abroad, I find myself wanting to turn back time or extend the time I still have. In the next month, I’m planning to genuinely cherish my being here in Paris—whether that’s by having more chats with my host family, strolling in new parks, or visiting tourist sites that I’ve never been to before. After all, time will fly.