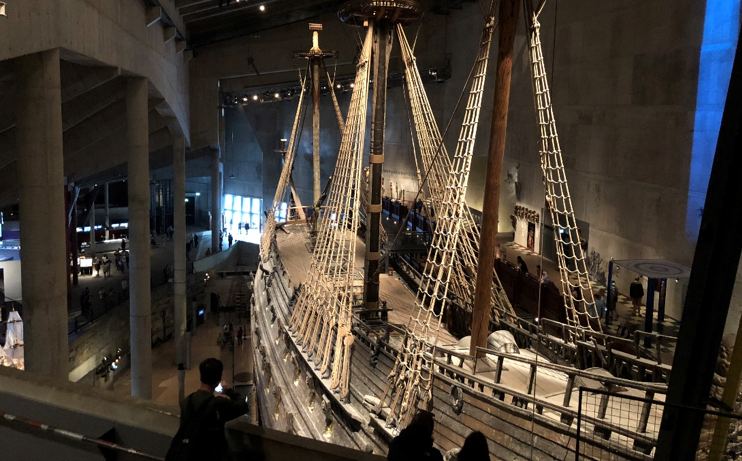 Featured image: The Vasa, a Swedish warship that was salvaged from Stockholm harbor

I look at the clock. It reads 3:20 in the afternoon. My research block was supposed to end at 6:30, but I happened to finish early today. Realizing this, I quickly clean up my lab bench, run a probably-not-recommended, cursory check of my oocyte samples, and sprint outside to head home. Since it’s mid-afternoon, I’m expecting to walk outside, get hit by a swift Stockholm breeze and bask in what little sunlight is left in the year. Nope. Dead wrong. It’s pitch black. The reckoning is nigh. The Scandinavian winter has begun.

Honestly, I don’t know if the short days began earlier, but since I was in London for a school trip a week earlier, that was my first time experiencing it. Other than the meager five hours of sunlight I get per day now, the last two months in Sweden have been incredible, and I’m still having the experience of a lifetime. The past couple of weeks have been filled with traveling, host family bonding, and academic experiences that I would have never imagined to be a part of. From visits to Denmark, Estonia, and England, to finally starting my independent research project at the SciLife lab, there’s a lot to talk about.

Let’s start with the the fun part: LONDON, BABY. For my Translational Medicine class, we went on a week long study tour to London, England, and what a time it was. Despite the fact that we were still in Europe and experiencing a foreign country, I got very strong American vibes everywhere I went. From the street vendors to the rows of skyscrapers, if you had told me I was in the United States, I might have initially believed you. It was different than any European city I had been to (granted, I haven’t been to many, but still), and I even forgot that people in this country speak English as their main language when I first got there. When the man on the Tube made an announcement in English, I was half surprised that it wasn’t in Swedish.

Other than the quick realization that I had to make that we were in a different country, the rest of the trip was a blast. We were able to attend several lectures at Oxford, University College of London, and Kings College on various topics such as the genetics behind cardiovascular disease, new methods to treat type II diabetes, and muscle atrophy. We were also able to release our inner American tourist by going on bike tours through Hyde Park, visiting Buckingham Palace, and riding in the London Eye.

My trips to Estonia and Denmark were equally as exciting, but shorter-lived since I only went for a weekend. However, both places made me have more of an appreciation of the diversity of their respective cultures and societies. Tallinn was smaller, quieter, and more quaint. Copenhagen was bustling with nightlife, drinks, and music. Even though all of these cities are different, they were all incredible in their own unique way.

Regarding my life back in Stockholm, it’s still better than ever. Now that I’ve been here for some time now, I have found the perfect balance for managing my academics, social life, and sleep. Research has been going fairly well, with my lab partner and I finally beginning to collect data from our formulated protocols. Even though I have to wake up at 6:50 every morning for my commute to the SciLife Lab, the fact that I have the privilege to do research at such a prestigious institute is exciting every time I show up for our 8:30 meetings.

Though lab may sometimes run late, or I might be out long on weekend nights, I find that having family dinners every day really lets me spend quality time with my host brothers and mom, while also letting me have my own independence. I also hang out with Eric and Simon (our host brothers) as much as I can on weekdays. Sometimes that may mean getting whooped in a game of football or whooping them in a game of NBA 2K. Seth (my housemate) and I have also introduced American Football to the family, and now we watch games every Sunday night and teach them about the rules, teams, and players. Eric is a fan of the terrible Dallas Cowboys, but hopefully I can convince him to be a Bills fan by the end of the semester.

Well, it’s two months down, two to go. I have had such an overwhelmingly positive experience in Stockholm that I sometimes consider coming back, potentially for graduate school. Facetiming my parents and friends from Vassar has definitely helped me to overcome homesickness, and they’ve all been incredibly supportive of me even though I am thousands of miles away. I learned so much and experienced an equal amount while being abroad, and I’m excited to know where my journey takes me in the upcoming two months!