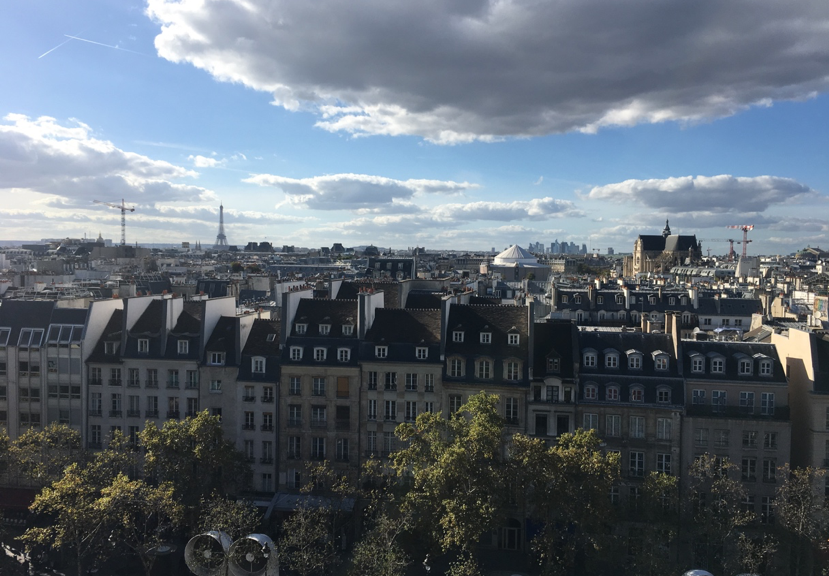 Featured image: The view from Centre Pompidou, a modern art museum in Paris.

It finally happened: I joined a French gym. After being worn down by weeks of being harassed by French men while running on the streets near my apartment and realizing that it’s rapidly getting colder and darker in the mornings, I caved and got a gym membership. Much like everything else here, French gyms are smaller than American gyms. The weight room is unbelievably tiny and cramped, to the point where I trip over people on my way to bench press. When I had trouble adjusting a weight machine last week, within 30 seconds, a beaming French man swooped in to do it for me. I mustered up a quiet “Merci?” The sign-up process for the gym was the epitome of French bureaucracy, beginning with the fact that there were only 2 hours per day during which I could sign up, and ending with the fact that I had to sign three different copies of paperwork. My heart rate goes up at the gym just trying to avoid the staff member who insists I still owe 25 euros for some unknown reason.

Although many things in Paris have gotten less stressful, such as making conversation at dinner with my host mom and navigating the ten different metro exits at the big station, I’m still reminded of how little I understand about this country when I do things like buy the wrong kind of stamps. But something I have gotten better at is understanding the university system, after almost a month of classes. I’ve figured out that not only do French students eat in class, they talk during class – but exclusively to each other, never to answer the questions that the professors offer up half-heartedly before continuing to barrel on with their two-hour-long lectures. The lecture format here is wildly different from my small classes at Vassar, and that coupled with the fact that I don’t have nearly as much homework as I do in the States, makes me feel like my whole world doesn’t revolve around school the way it normally does at this point in the semester. Don’t get wrong, I definitely have assignments I should working on, but I’m enjoying having more of a school-life balance than I normally do at Vassar.

I recently left Paris for the first time since I’ve been here, to go to London for a weekend. In London I promptly tried to speak French to the border agents before remembering that I actually speak their language like, fluently. It was relaxing to be in a place where I could eat good pizza and didn’t have to rehearse my drink request multiple times in my head before panic-ordering as I normally do. But I also found myself relieved to be back in Paris after the weekend, feeling a smug sense of pride watching tourists try to navigate the airport and the metro while I confidently strutted back to my apartment. Even though constantly speaking another language is exhausting and overwhelming, I’m still glad I pushed myself to truly be immersed. Of course, that feeling is diminished whenever I speak French to people here and they reply in English.

An experience about which I’ve been talking with my fellow JYA friends is being stressed that the semester is already half over and feeling like I haven’t taken advantage enough of the opportunities here. It can be easy to feel like I haven’t been making the most of my time in Paris, especially when I sleep in on a weekend, or take the day off to see what American romantic comedies are on French Netflix. But I’m trying to remind myself that just because I’m not busy 24/7 here doesn’t mean I’m not growing as a person and that, sometimes, sitting in a park for hours with my friends just enjoying the fall foliage, is making the most of my time here.

Some other recent highlights from my Parisian experience include: going to a Beach House concert, seeing an opera sung in Italian with French and American subtitles and only understanding about a quarter of it, and trying mussels for the first time. Also, I recently saw the movie BlacKkKlansman in a theater here, with French subtitles, and was struck by how weird and cool it is to understand the dialogue in both languages. As an American student here, I feel like I’m occupying a space between tourist and local. Let’s hope the balance leans less to the touristy side…