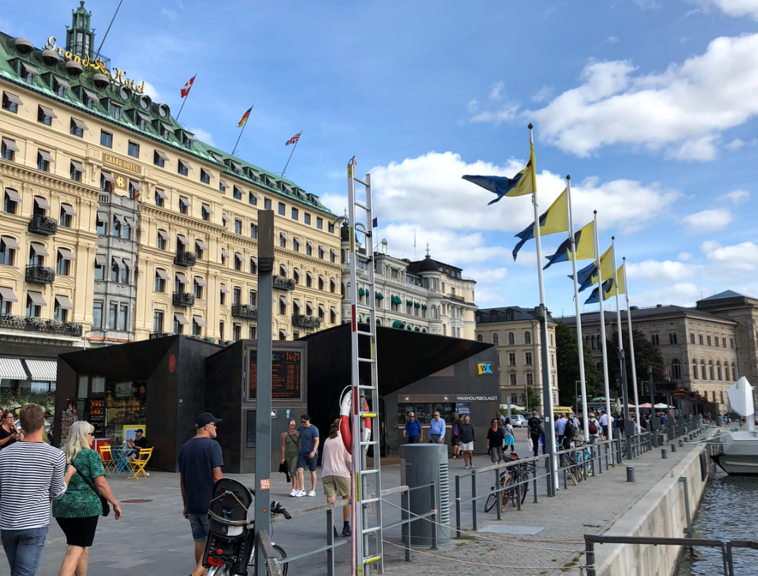 I just wanted to start off by saying that just because you are pre-med, doesn’t mean you can’t go abroad too! I didn’t even plan on studying abroad, because I was told that it was too difficult to go JYA if I was pre-med, since there were so many requirements. Then towards the middle of the fall semester, I found a program called DIS Stockholm that had a core class focused on the translational medicine side of both the medical research and practice fields. In theory, this seemed like an opportunity that I could not pass up because it hit literally every interest that I was pursuing. So, I went for it. And let me tell you, it was the best thought-through reckless decision I had ever made.

Despite the combined 10-hour layover and 24 straight hours of traveling on my first day, Sweden has been better than I could have ever expected. I am living in a homestay in Sollentuna (a suburb in northeast Stockholm) with a host mom, two host brothers (18 and 16 years old), another DIS student, and a host dog. Plus, I have an additional “extended host family,” which has been double the fun. (My host mom’s twin sister lives in the same neighborhood and also has another student, along with three kids). Weekend dinners are a blast because we all get together in one house, have a great meal, and usually end it with a sing-along or a game of Heads Up.

Starting from day one, my host family has been so great in showing us the touristy parts of Stockholm while also allowing us to have a genuine Swedish experience. I have learned the way of “fika,” which is an afternoon coffee and pastry break that almost all Swedes participate in. On weekends, we have just walked around scenic areas of Stockholm. Another time we went to see Kevin Hart at the Ericsson Globe. Last weekend, we went to the most violent and chaotic football derby in Sweden. It was a game between Hammarby and AIK, and when I say it was lit, I mean there were firecrackers and flares literally alight in the stadium. The game was delayed by around 30 minutes and the players went back to the locker rooms to wait until the smoke cleared. As a football fan, it was an incredibly exciting time, and I had never been so ecstatic while choking on smoke. We slipped out at the 88th minute to avoid any after-match fights between fans, since the team we were supporting, AIK, won a pretty controversial game that could have gone either way.

But back to the academic side of things – after all, it is called studying abroad. At DIS, we are allowed to take one core course and electives on top of that. My core course is on Translational Medicine, and I am also taking Tumor Biology and Oncology, along with Introductory Swedish as my elective classes. They have been super interesting, especially because they are incorporated with field studies in which we go to different universities and labs in Sweden to get a more in-person experience of what we are learning about in class. Plus, I was accepted into the Science Practicum program that allows me to conduct research at the SciLife Lab in Stockholm. The SciLife Lab is a Swedish national laboratory that works in tandem with four medical universities, including the esteemed Karolinska Institute. I am thankful for this opportunity to work at such a prestigious institution, and it has made my academic experience in Sweden even better than I thought it could be.

Overall, living in Sweden has been almost like living in the future, and I’m not talking about flying cars or hoverboards; I mean more in a societal and economic sense. When I talk about the issues we have in the United States such as climate change, welfare states, or education, my host family sounds shocked to hear that these topics are even debatable. They ask me “how can some people really think global warming isn’t real?” or “some people really think that poor people are just lazy?” It’s as if the problems that the U.S. is facing today are of the past in Sweden. This is not to say that Sweden does not have problems of its own, such as issues of immigration that were debated in the recent election. However, to some extent, it feels like Swedes have more of a general sense of community. There is a strong sense of national pride here in Sweden, but it’s not unnecessarily vomited onto you at random times or groundlessly stated as an answer to every question. Instead, it unifies the people to solve problems for the benefit of the country. This can be seen in Sweden’s Social Progress Index, which is one of the highest rated in the world. Despite this, it is unfair to compare directly with other countries like the United States since there are many factors including population size and form of government.

These are just some thoughts that I have compiled so far during my short time living in the “capital of Scandinavia.” I’ve had a blast experiencing society, academics, and culture in a new country, and I am excited for what’s to come next!