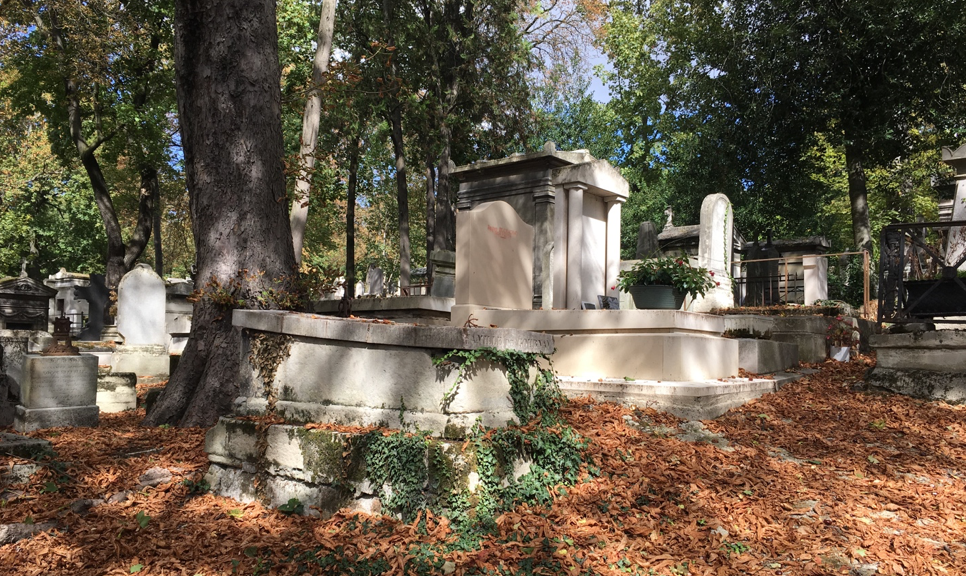 Featured image: Père Lachaise cemetery in Paris, where my friends and I tried to resurrect Jim Morrison last weekend. We’re hoping to see him again within 30 days.

The day I arrived in Bordeaux, France, my host family threw a dinner party with some friends and we began eating dinner at midnight. I was exhausted from not having slept on the plane ride over, groggy from my three-hour afternoon nap, and incredibly jet-lagged. Needless to say, I don’t remember any of the names of the people I talked to at the party, but I do remember thinking that if the French ate this late every night, it was going to be a long semester. Thankfully, we didn’t eat quite that late again, but my host family in Bordeaux regularly ate dinner at 10 pm. I was so relieved when I got to Paris and my host mom told me she likes to eat around 8 pm. I still don’t understand how the French can scarf down bread and cheese at 11 pm, and not have any trouble sleeping.

My favorite way to immerse myself in French culture is by eating as many pastries as possible, and that’s pretty easy to do in Paris. My walk from the metro stop to class takes me right by a bakery whose sign boasts that it was voted #1 baguette in Paris in 2018. Aside from fresh baguettes, I’ve been eating my fair share of croissants, pain au chocolat, and pepitos, which go by different names depending on which patisserie is selling them, but are essentially pastries filled with vanilla cream and chocolate bits. Frequently I get a student formule for lunch, which consists of a sandwich, a dessert, and a drink, all for a relatively low price. I’ve also been eating a lot of grocery store pre-made salads in between classes, because, believe it or not, there is such a thing as too much bread and cheese. I have yet to try escargot, but I had my first (and probably last) oyster in France. My favorite grocery store chain here is called Picard, and it exclusively sells frozen foods. You can buy microwavable meals there, or frozen veggies and meats. I made myself some cordon bleu from Picard last week, and I have no idea if that’s what real cordon bleu is like, but it was good enough for me.

Aside from the food, my favorite things about Paris so far are the architecture and the public transportation system. I feel like I can see the history of the city just by walking down any random street and looking at all the buildings. My favorite subway ride is taking the 6 from one end of the city to the other, because it has the best views. A lot of the stops are above ground, and it crosses the Seine twice. The best sites I’ve spotted while riding the 6 are the Eiffel Tower and huge murals along the side of apartment buildings. Something I’m very conscious of while I’m here is not wanting to become desensitized to the landscape of Paris as I settle in here more. I’m trying to slow down and really notice details about the city’s physicality. Right now I’m noticing how all the leaves are beginning to change color and fall to the ground. The mornings and evenings feel cold here now, and I’m enjoying seeing the seasons change in a way that I wouldn’t appreciate at Vassar because I have a busier schedule there.

I just turned 21 in a country where sixteen-year-olds can order a glass of wine, which was pretty underwhelming. The two wine tasting events that we went to in Bordeaux left me secure in my belief that all wine tastes alike, so I can always just order the cheapest thing on the menu. Since it was my birthday, and since students here can get into most museums for free, I went to the Musée d’Orsay, which is located inside of an old train station. I couldn’t decide which was more impressive: the art or the building. Other museums I’ve been to here include the Louvre (got overwhelmed by all the art, saw the Mona Lisa and thought it was overrated), the Museum of Modern Art (small but cute), and the Atelier des Lumières, which is a presentation of Klimt’s works set to music and projected on the walls of an old warehouse (easily my favorite).

Living in a homestay lets me really settle in to my neighborhood. There’s a bakery and an outdoor market I go to on a weekly basis, and since I’m near a cemetery, I’ve been counting all the funeral homes I see (currently have seen about eight). Feeling like there’s an area of the city that I understand and know my way around makes the transition here a lot easier. I still feel self-conscious when I make small mistakes in French, like saying bonjour when I should be saying bonsoir. But on the bright side, a policeman at the Charles de Gaulle airport border control just told me that my French is good.